Living cells depend upon the flow of molecules across membranes for essential processes such as sensing, signaling, and energy production. Yet the cell membrane presents a formidable barrier to the transport of these molecules because they cannot cross the membrane unaided. As a result, living systems have evolved highly efficient trans-membrane protein channels that rapidly and selectively transport ions and molecules and play a key role in nutrient uptake, osmotic regulation, signal transduction, muscle contraction, and hormone secretion. For this project, we proposed to create the first artificial inorganic ion channel using short barrels of carbon nanometer-scale tubes. The inner channel of a carbon nanotube is narrow, hydrophobic, and very smooth, which has a remarkable similarity to the properties of natural biological pores. We planned to cut these carbon nanotubes in short pieces that match the thickness of a lipid bilayer, insert the nanotube barrel into the lipid bilayer membrane to form a pore that permits ion transport across the bilayer, and use chemical modification to alter channel selectivity. We will then characterize transport efficiency and selectivity of these structures, as well as demonstrate specific targeting of these ion channels to bacterial membranes. Creating a functional abiotic mimic for these protein channels can produce new therapeutic agents, biosensors, and pore-forming antibiotic agents, as well as a versatile model system for studying design rules for transport efficiency and selectivity in membrane channels.

The physical characteristics of mass transport processes in condensed phases can change drastically when the size of a channel starts to approach molecular dimensions.1 This regime encompasses most of the transport phenomena that occur in biological channels,2 and synthetic nanometer-scale pores in the nascent field of nanometer-scale fluidics.3 Such extreme confinement can lead to unusual ordering of water molecules,4 ion exclusion properties absent in the bulk channels,5 partial de-solvation of ions, and unusually high transport rates for water and protons.4,6,7 Molecular transport through nanopores is also critical for applications such as membrane filtration, dialysis, and nanopore sensing.8,9

Biological nanopores, such as aquaporins10 or potassium-ion ion channels,11 provide a great example of designed nanopores with high transport efficiency and selectivity. However, most biological protein pores are too fragile for many applications and are difficult to scale up. The need remains for a nanofluidic platform that is versatile and can be easily fabricated. Simulation studies of carbon nanotubes predict that the high degree of confinement in pores and atomic smoothness of the carbon nanotubes walls could lead to high water-transport rates, a phenomenon that was first observed a decade ago using vertically aligned carbon nanotube membrane platforms.7

In this project we set out to synthesize a nanofluidic platform that delivers unique transport properties of carbon nanotube pores in a geometry and form factor that is easy to use in applications. To that end, we decided to create pores based on short (~10-nm) carbon nanotubes that approximate the geometry and functionality of biological ion channels (Figure 1), thus giving us the ability to use them in a variety of measurements, ranging from bulk-scale to single-pore scale measurements, and reaping the benefit of higher stability and longer shelf life. This approach turned out to be successful and resulted in creation of carbon nanotube porins. Moreover, we demonstrated that these porins reproduce a number of key properties of biological ion channels, including the ability to transport water, ions, and protons; the ability to self-insert into a lipid bilayer; and even the ability to exhibit stochastic gating and insert into live cell membranes (Figure 2).12 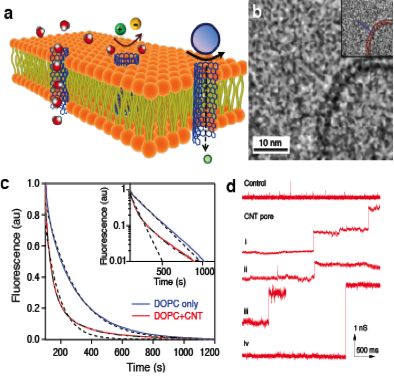 Figure 2. (a) Schematic illustrating carbon nanotube (CNT) porins inserted into the lipid membrane. (b) Cryogenic transmission electron microscopy image showing a CNT porin in a lipid membrane. (c) Proton transport in CNT porins. The addition of the porins to the lipid bilayer causes faster decay of the fluorescence of a liposome-encapsulated pH-sensitive dye after the liposome was exposed to a pH gradient. (d) Conductance traces showing spontaneous incorporation of CNT porins into a lipid membrane from solution. Each conductance jump of 0.62 ns corresponds to an individual porin incorporation.12

A significant accomplishment of the project was the demonstration of the ability of the carbon nanotube porins to self-insert into the lipid bilayers and form biomimetic nanopores that span the bilayer thickness, as shown in Figure 1(B,C). These properties were confirmed by cryogenic transmission electron microscope measurements and subsequently validated in the transport measurements. These transport tests showed that carbon nanotube porins have remarkable similarities to the biological ion channels, enabling transport of DNA, ions, and protons with efficiency approaching, in some cases, those of biological pores. Another notable feature of the system was the ability of carbon nanotube porins to bridge two lipid bilayers, making them a perspective system for creating connected lipid vesicles.

Another accomplishment enabled by this project (obtained in collaboration with researchers at the University of Basque Country in Spain) was the demonstration of the ability of the carbon nanotube porins to insert into live cells (Figure 3). Carbon nanotube porins readily formed uniform conductance pores in the cell membrane, which resulted in significant channel activity in the membrane that was clearly distinguishable from the native membrane channel activity in the cells. Moreover, the conductance of the membrane channels was consistent across the cell lines and matched conductance obtained previously in the planar lipid bilayer measurements. These data also established low cytotoxicity of carbon nanotube porins, a property important for potential antibiotic use. Tests on bacterial cultures for bactericidal activity are in progress. Overall, we have established the carbon nanotube porins as promising materials for drug delivery applications, as well as for building cellular bioelectronic interfaces and, with further development, they should find a prominent place in a variety of nanopore sensing and biological interfacing platforms.

This research is well-aligned with the Laboratory’s strategic thrust in biosecurity and core competency in bioscience and bioengineering through development of a membrane-penetrating structure that uses a completely different paradigm from existing membrane agents. Successful demonstration of this inorganic channel scaffold could lead to the emergence of a new class of potent antibiotic agents that would bolster resistance to pathogens and also be extremely resistant to environmental degradation. Such agents would make an important contribution to science and the development of biological countermeasures.

The discovery of carbon nanotube porins and development of a facile synthesis technique for their production is a major step for LLNL capabilities in nanofluidics and, potentially, bioelectronics. Carbon nanotube porins provide a unique, flexible, and robust system for mimicking biological transport in membrane systems and open up a number of opportunities in areas ranging from new membrane-separation systems to novel drug-delivery methods. The team has filed a patent application based on the work, and commercialization opportunities are currently being explored.