The Water Cherenkov Monitor for Antineutrinos (WATCHMAN) is a proposed joint nonproliferation project to deploy a kiloton-scale, gadolinium-doped water Cherenkov detector approximately 15 km from a nuclear reactor in the United States. If deployed, this detector may revolutionize the global nonproliferation regime through remote detection to sharply reduce the risk of nations illicitly operating undeclared reactors for plutonium production. In addition, it has the potential to provide a flexible laboratory to enable a wealth of fundamental neutrino science that has been identified as a high priority by the DOE Office of High Energy Physics. We plan to adapt the detector for such studies of the fundamental properties of neutrinos. Specifically, we will evaluate the capability of WATCHMAN to measure neutrino mass hierarchy by modifying an existing, custom-built WATCHMAN code. The code will be based on the Geant4 simulation tool that models the passage of particles through matter based on Monte Carlo calculations, which rely on repeated random sampling to compute results. The modified code will be used to examine detector response to mass hierarchy effects, taking into account uncertainties in the underlying oscillation and mass-difference parameters that affect measurements, as well as detector-related systematic effects. We will quantify the potential of WATCHMAN for supernova detection, the search for a fourth neutrino type, the neutrino mass hierarchy, and nonstandard neutrino interactions. This project may also ultimately benefit the design choice for WATCHMAN by identifying a minimum target mass or energy resolution for which an acceptable level of sensitivity can be demonstrated for remote reactor detection.

We expect to strengthen the scientific case for WATCHMAN by investigating the sensitivity of the baseline and follow-on WATCHMAN designs for measurements of interest for fundamental science. We will employ an existing detailed Geant4-based custom Monte Carlo code to assess WATCHMAN's sensitivity to sterile neutrino oscillations, nonstandard neutrino interactions, and supernova. We will extend and refine the Monte Carlo package to assess sensitivity of upgraded versions of the detector to the neutrino mass hierarchy, Earth-produced anti-neutrinos, proton decay, and other phenomena. The impact of extending the physics reach on the detector design will also be considered and incorporated into our studies.

Our research will simultaneously help reduce the global threat from weapons of mass destruction as well as address scientific issues of importance to the Laboratory, NNSA, and DOE. By demonstrating and extending the scientific potential of WATCHMAN, we support Livermore's central mission of addressing nonproliferation challenges, in addition to the strategic core competency in nuclear, chemical, and isotopic science and technology.

In FY15 we (1) performed new in-depth studies of neutrino directionality using beam and reactor sources, with support from a collaborating graduate student from Texas A&M University, who did much of the directional analysis for the reactor signal; (2) hired a postdoctoral researcher from the University of California, Davis, who is one of the main architects of the WATCHMAN simulation package; and (3) worked to improve and extend the reach and flexibility of the simulation package, allowing simulations of a water-based scintillator and a new form of fast and sensitive photo-multiplier tube. 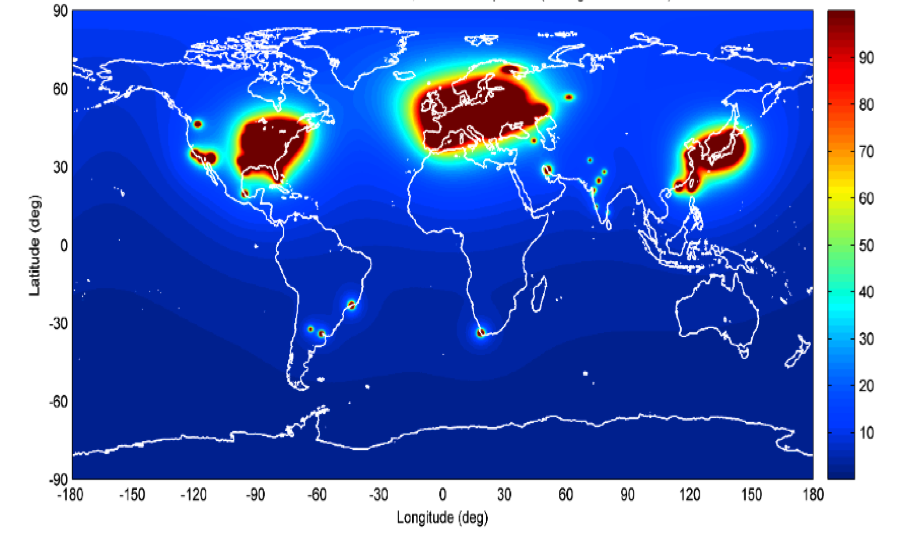 A map of the global nuclear reactor anti-neutrino flux, showing the three important industrialized regions that dominate the worldwide flux. The WATCHMAN collaboration aims to deploy the first scalable detector sensitive to such emissions over long distances. We are working to determine the long-term physics program that could be developed at such a detector.