The x-ray performance of a laser Compton light source is tied directly to the brightness of the electron beam, increases in the beam current, or reductions in the beam emittance. Using a combination of modeling and experimental efforts, we have demonstrated the viability of x-ray generation from multiple bunches in an X-band accelerator system and investigated their utility for mission-related applications. Our work included upgrades to the Lawrence Livermore National Laboratory's X-band radio frequency photoinjector and accelerator system for generating additional pulses. We also measured an increase in the electron beam brightness and characterized the emittance of multiple-bunch beams, which can subsequently improve brightness of the x-ray source. In addition, we modeled the electron and laser interaction to validate the expected system performance and cross-check beam simulations with measured results. The controls were upgraded to improve the day-to-day operation of the machine, enhance its capabilities, and more quickly deliver x-rays to users.

Over the last few years, a world-class X-band radio frequency (RF) photoinjector and accelerator have been assembled and commissioned in the South Cave of Livermore's Building B194 with the goal of advancing the state-of-the-art in tunable, narrow-bandwidth gamma-ray and x-ray sources based on laser-Compton scattering. Presently, the system produces 100 pC, 28 MeV electron bunches with 0.3 μm emittance, and an interaction region has been designed to enable scattering of a six ns neodymium-doped yttrium aluminum garnet (Nd:YAG) laser from the electron beam to generate approximately 30 keV x-rays.

This energy range is very useful for some application spaces (e.g., medical imaging), but there are also applications relevant to lab missions in the 100 keV energy range, which will require increases in both electron beam energy and average current. The compact nature of this technology could ultimately, for example, be deployed as a diagnostic on the National Ignition Facility (NIF), combining an advanced drive capability with a novel, tunable x-ray source. This would enable backlighting capabilities beyond what ARC currently can provide, as well as enabling time-resolved x-ray diffraction measurements.

Previous research has verified the key technologies for a path to this source including a GHz repetition rate drive laser to allow 100-plus bunches of electrons for each RF pulse and compact RF pulse compression to boost the accelerating gradient of the existing structures. Before these technologies were integrated into the accelerator system, we developed and studied a combination of modeling and experimental efforts that validated the viability of the ultimate system for experiments of interest to DOE/NNSA missions.

A narrow-band x-ray source is ideal for a variety of applications that rely on the K-edge effect, which is related to the binding energy of the innermost electron shell (K shell) of an atom. For this interaction effect to occur, the source photons must have more energy than the binding energy of the K-shell electrons (K-edge) of the target material. Uses for such a source range from medical applications where an absorption edge in iodine injected into the bloodstream can significantly enhance the contrast of fine anatomical features to Livermore's NIF target diagnostics where detecting the shift in the K-edge of an atom as it ionizes could allow a spatial map of the ionization state in hot plasmas. Current and future generations of these advanced light sources largely depend on high-brightness electron beams. We investigated the potential utility of Compton scattering of laser light to produce x-ray sources for radiography and diffraction measurements. We further studied the physical and engineering limitations on brightness performance of a recently commissioned X-band linear accelerator at Lawrence Livermore, and investigated x-ray production via Compton scattering using the system. We measured both the peak and average brightness of the machine with respect to per-bunch emittance of x-rays and increasing the number of bunches the machine produces in a unique, closely spaced, multiple-bunch mode of operation.

In FY15, we (1) performed a systematic study of X-band photoinjector brightness, and determined the ultimate performance of the X-band system at various bunch charges; (2) produced and measured x-rays from Compton scattering of laser light, and verified qualitatively that the x-ray beam had a very narrow bandwidth; (3) demonstrated a train of four electron bunches at 87.5-ps spacing, and generated x-rays with this train; and (4) significantly upgraded the control system to allow for rapid tuning and simpler operation of the machine.

In FY16, we (1) generated narrow-bandwidth x-rays using the X-band photoinjector, and the x-rays were characterized in close agreement with modeling predictions using measured electron beam parameters; (2) optimized x-ray flux and bandwidth to achieve this close agreement, which led to record electron-beam performance; (3) upgraded controls for streamlined operation and automated data analysis; and (4) procured new hardware for planned upgrades to greater than 85-MeV electron-beam energy and greater than 250-keV x-ray energy. The extensive tuning and operation of the X-band photoinjector achieved a root mean square normalized emittance of 0.27 μm milliradian at a charge of 80 pC. X-ray optimization and characterization verified an x-ray flux of 3 x 106 photons/s in good agreement with modeling, as shown in Figure 1. 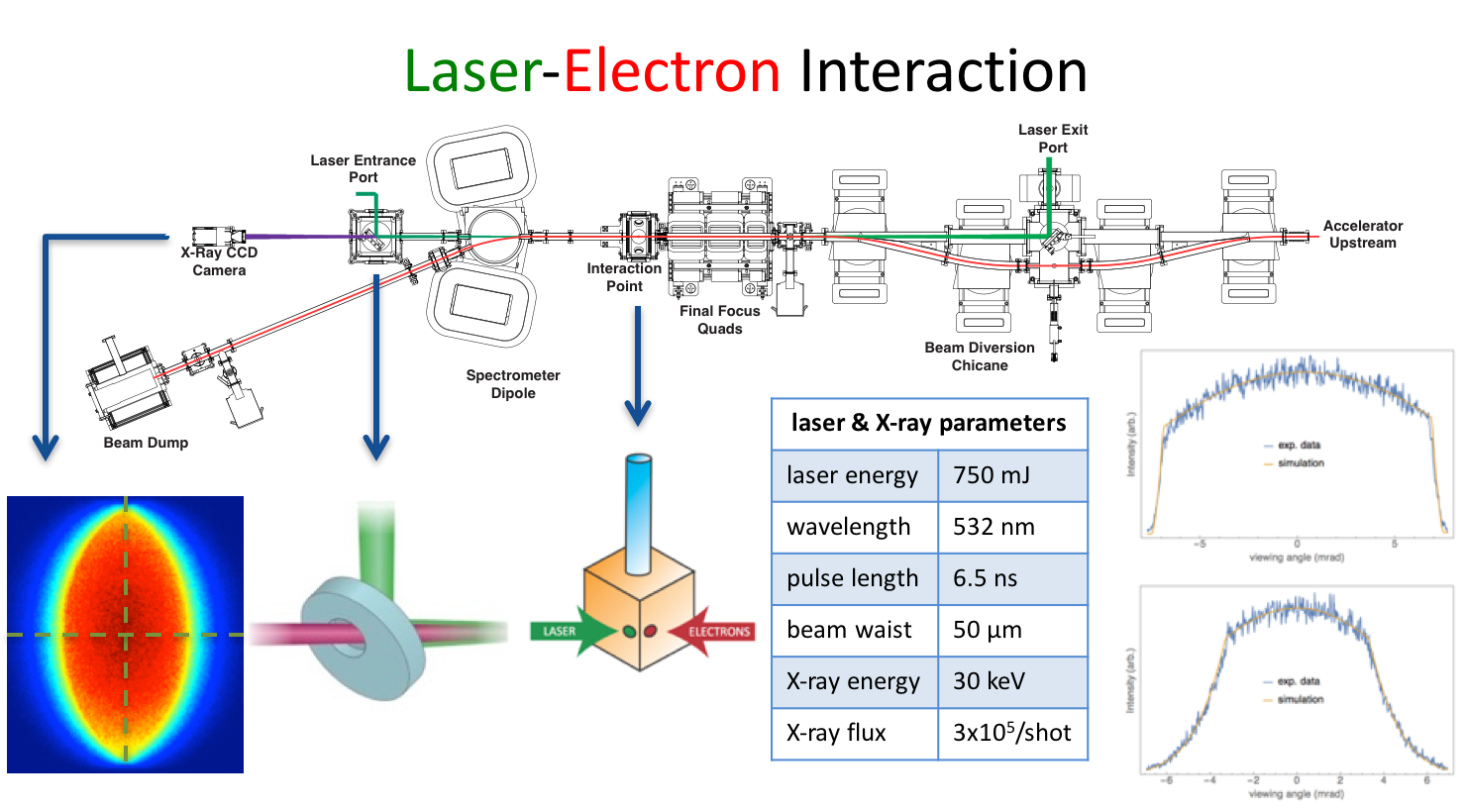 In FY17, we proposed to (1) install upgrade hardware; (2) commission the accelerator; and (3) extend the x-ray energy tuning range. However, the beam energy upgrades were not installed due to funding constraints. A train of 16 electron bunches was produced as shown in Figure 2, and emittance measurements showed beam quality to be consistent with the quality of the individual bunches. X-ray resolution measurements showed that the source size of the x-rays was greater than 42 μm, limited by the resolution of available detectors.

The capability developed under this project lays the foundation for a compact, time-resolved, and potentially stroboscopic high-energy x-ray capability applicable to advanced laser light sources. This capability aligns well with the Laboratory's core competency in lasers and optical science and technology. The technology we developed could serve as a diagnostic on a high-energy drive-system (such as Jasper or NIF) to perform mission-relevant measurements in high-energy-density research at the Laboratory.

We explored using the current facility for x-ray applications including medical and high energy and resolution for NNSA-relevant missions. From this work, we will explore options to implement the desired upgrade to the system end-point energy, brightness, and flux. To do so would include adding RF pulse compression and distribution to the current RF transport—enabling 100 keV x-ray production. Flux would be increased by replacing the current single-pulse, 10 Hz Ti:Sapphire system with a 120 Hz, multi-GHz pulse train drive laser, as well as installing a 120 Hz, 1-J interaction laser. These upgrades would be a two- to three-year effort—including system integration, commissioning, and characterization. The high brightness electron beam demonstrated in this work—in addition to being optimized for driving “precision” mono-energetic Compton photon sources—may have additional “off ramp” applications. For example, it could be used as an injector for inverse free electron laser acceleration or laser wakefield acceleration. Finally, the deep expertise in Compton scattering photon sources developed by not only this project but the long sequence of Compton projects at Lawrence Livermore is underpinning the investigation of additional applications of Compton sources for HED diagnostics.