We have developed an end-to-end simulation capability for x-ray free-electron laser (XFEL) experiments that can be used to design and optimize XFEL high-energy-density experimental campaigns. We have used this capability to support various XFEL experiments. Applications include the analysis of the performance requirements of x-ray optics for XFELs operating up to 120 keV, the study of the effect of slope errors on the performance of mirrors for XFEL applications, the analysis of the effects of x-ray optics thermal deformation on the beam intensity distribution at high repetition XFELs, the numerical simulations of the hard x-ray pulse intensity distribution at the Linac Coherent Light Source, and numerical simulations of the pulse energy distribution of self-amplified spontaneous emission XFEL radiation after a narrow band-pass filter.

XFELs can be used to control the creation of warm dense matter, a plasma state that is not very well understood, and they also can be used to probe high-energy-density (HED) materials. As such, XFELs like the Linac Coherent Light Source (LCLS) at the SLAC National Accelerator Laboratory in Menlo Park, California, can enhance our understanding of the structure and dynamics of HED matter. HED experiments using XFELs are maturing and are calling into question some long-held ideas in HED science. However, these experiments are complex to design and execute; the data analysis is complicated; and researchers are compelled to complete experiments in one pass. We developed the tools necessary for researchers to design and optimize XFEL HED experiments. We then used these tools to support XFEL experimental design and optics.

We developed and implemented an end-to-end model of experiments to facilitate the design and analysis of efficient and successful HED science experimental campaigns. Even though XFELs like the LCLS produce high-quality light, pulses are not reproducible, so we need to simulate a representative number of different realizations using high-performance computing. Simulation elements include x-ray propagation, x-ray interactions with optics, and sample interactions at low to high intensities. Figure 1 shows a schematic of our simulation capability XFELsim. XFELsim includes (1) routines for the generation of self-amplified spontaneous emission (SASE) radiation fields via the GENESIS code (Reiche 1999), (2) wavefront propagation routines via the PROPER library of functions (Krist 2007) translated into Python, and (3) a selected number of routines for wavefront-sample interactions. We will now summarize select applications of XFELsim.

We quantify the performance of reflective x-ray optics as optical elements for an XFEL working at hard x-ray energies ranging from 40 to 120 keV. Using XFELsim and simple analytical models, we show how the state-of-the-art in reflective x-ray optic manufacturing can deliver substrates capable of yielding nearly diffraction-limited intensity profiles for energies up to 120 keV. To demonstrate our results, we propose two potential optical designs for a hard XFEL facility yielding focal spot sizes ranging from sub-1 μm to 1 cm. We suggest that a facility of this kind would enable experiments such as phase contrast imaging (PCI) and radiography of high-Z materials currently not feasible due the low penetration power of x-ray energies available at current XFEL facilities (see Figure 2).

We investigated the effects of soft x-ray optic thermal deformations on the intensity beam distribution in and out of focus at a high-repetition XFEL. We used as a test case the Atomic, Molecular and Optical Science (AMO) instrument under design for LCLS II. First, we numerically computed the surface deformation on the instrument’s offset and focusing optics, resulting from the absorption of x-ray pulses at a frequency of 10,000 Hz. We did so for the state-of-the-art side cooling scheme. We then implemented wavefront propagation simulations to quantify the effects of such deformations on the beam intensity profile in and out of focus. We showed that, compared to side cooling, the recently proposed REAL cooling scheme effectively reduces intensity aberrations at and near the focal plane (see Figure 3), where we provide quantitative on-axis Strehl ratio values (optical image formation values). We also compared the in-focus results with the analytical estimates one would obtain implementing the model of Church and Takacs (Church 1996) and found reasonable agreement. Several millimeters out of focus, our simulations found only very minor deviations from the ideal Gaussian intensity profile with either cooling scheme. By implementing the Talbot formalism (Zhou 2010) for non-collimated wavefronts we suggest that this is the result of the low-frequency nature of the thermally-induced aspherical figure error. We concluded by pointing out that even the REAL cooling scheme fails to be adequate at the highest repetition rate expected for the LCLS II, a regime where adaptive x-ray optics promise to be an ideal candidate.

We provided numerical simulations of the current and future pulse intensity distributions at selected locations along the Far Experimental Hall, the hard x-ray section of the LCLS. Estimates are given for the pulse fluence, energy, and size in and out of focus, taking into account effects due to the experimentally measured divergence of the x-ray beam and the measured figure errors of all x-ray optics in the beam path. Out-of-focus results were validated by comparison with experimental data. Previous work was expanded on, providing quantitatively correct predictions of the pulse intensity distribution. Numerical estimates in focus are particularly important given that the latter cannot be measured with direct imaging techniques due to detector damage. Finally, we provided novel numerical estimates of improvements to the pulse intensity distribution expected as part of the on-going upgrade of the LCLS x-ray transport system. We also suggested how the new generation of x-ray optics to be installed would outperform the old one, satisfying the tight requirements imposed by XFEL facilities. (See Figure 4.) 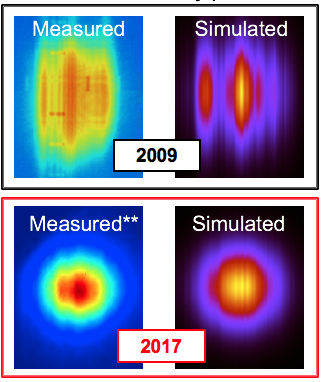 Figure 4. Predicted pulse intensity distribution at the Linac Coherent Light Source before the mirror upgrade (top) and after (bottom).

In this work, we pointed out that slope errors play only a minor role in the performance of a certain class of x-ray optics for XFEL applications. Using physical optics propagation simulations and the formalism of Church and Takacs (Church 1995) that makes them less sensitive to slope errors and more sensitive to height error. Given the number of XFELs currently operating or under construction across the world, we hope that this simple observation will help to correctly define specifications for x-ray optics to be deployed at XFELs, possibly reducing the budget and the timeframe needed to complete the optical manufacturing and metrology.

We studied the statistical properties of SASE radiation, beyond the simple analytical theory which assumes the ideal case of a Gaussian or top hat electron bunch profile. Using XFELsim, we provided results for more realistic machine parameters, which feature an asymmetric electron bunch profile currently used at LCLS. We studied the interaction of SASE radiation with single-crystal Bragg reflectors that can be modeled as narrow bandpass filters. Figure 5 shows the number of modes M in a SASE pulse as a function of the Darwin width of the Bragg reflection. The deviations from the analytical theory for small Darwin widths is attributed to the fact that the full electron bunch is not lasing. 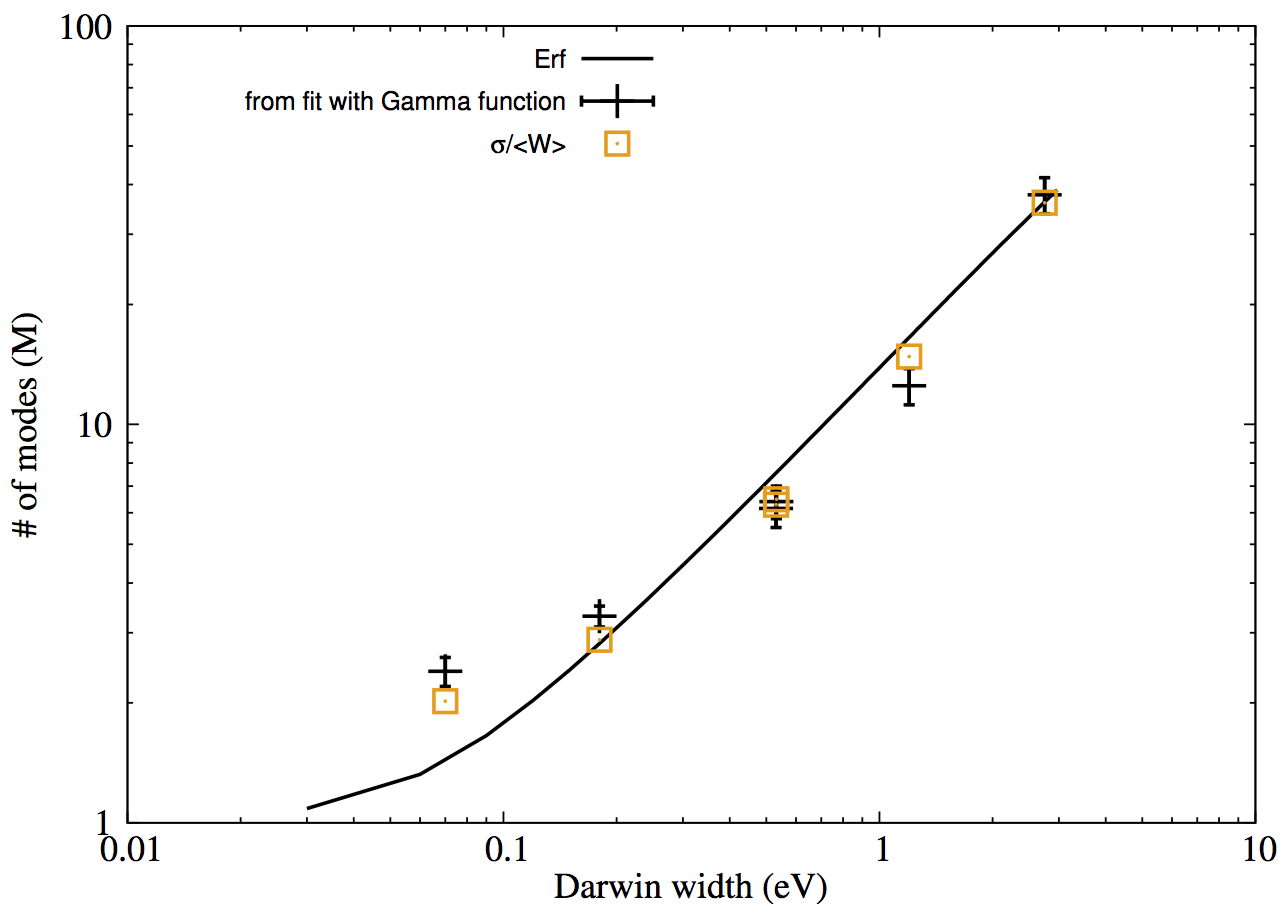 Figure 5. The fitted value of number of modes (M) for each crystal as a function of the Darwin width. ("Erf" = error function)

This project has enabled the development of XFELsim, which enhances LLNL's core competencies in high-energy-density science, high-performance computing, and simulation as well as the NNSA's goal to strengthen the science, technology, and engineering base. The outcome enables us to effectively use XFELs to develop a fundamental understanding of complex nonideal plasmas and high-pressure materials, and to help validate the models used in stockpile stewardship science and high-energy-density codes.

Our simulation capability XFELsim is being used to design experiments at various XFEL facilities. In collaboration with other national laboratories, we are in the process of identifying funding mechanisms to further proliferate the use of such capabilities.