Everything we know about the inside of Earth is derived from remote surface measurements in combination with modeling and experiments. Because of the high temperatures of the Earth's mantle, we have no way of drilling deeper than Earth's crust. We proposed to determine the relationship of hydrogen diffusion and conduction in upper-mantle minerals as a tool for inferring hydrogen distribution in the mantle. Nominally anhydrous minerals formed deep in the mantle and transported to the Earth’s surface have been found to contain tens to hundreds of parts per million by weight of water, providing evidence for its presence in the Earth’s interior. Even at these low concentrations, water greatly affects the physico-chemical properties of mantle materials, governing planetary dynamics and evolution. The diffusion of hydrogen controls the transport of water in the upper mantle, but is not fully understood for olivine, the most abundant mineral in this region. Hydrogen self-diffusion coefficients in natural olivine single crystals were determined at upper-mantle conditions (2 GPa and 750–900°C) to be highly anisotropic, with values at 900°C of 10-10.9, 10-12.8, and 10-11.9 m2/s along [100], [010], and [001] directions, respectively. From these diffusion results, we determined the contribution of hydrogen on olivine electrical conductivity via the Nernst–Einstein relation. Comparisons between the model presented in this study and magneto-telluric measurements suggest that olivine water contents comparable to those expected in the upper mantle (≤250 ppm weight) can account for high electrical conductivity values observed in the asthenosphere, the upper layer of the Earth's mantle, below the lithosphere.

Earth’s hydrosphere is a distinctive feature of our planet, where massive oceans affect its climate and support its ecosystem. The presence of water on Earth, however, is not limited to its outermost shell but extends to great depths within the planet. Downwelling oceanic lithosphere (at subduction zones), and upwelling magmas (at mid-ocean ridges, volcanoes, and hotspots) are vehicles for volatiles, such as water, to cycle deep into the Earth’s interior.1 Experimental studies have shown that it is possible for substantial amounts of water to be present in the mantle, hosted as defects in the structure of nominally anhydrous minerals. The major mineral component of the uppermost mantle, olivine, can incorporate as much as approximately 1-wt% water at conditions encountered at the lowest portion of the upper mantle.2 Minerals found in mantle xenoliths, including olivine, that are brought to surface by alkaline or kimberlitic magma eruptions, contain up to hundreds of parts per million by weight of water3 and provide direct evidence that water is present in the Earth’s interior. Recently, a crystal of terrestrial ringwoodite (a higher-pressure polymorph of olivine that forms below ~410-km depth) containing about 1.4-wt% water was discovered as an inclusion in a natural diamond,4 confirming that at least some regions within Earth’s transition zone contain large amounts of water.

Water, as hydrogen bonded to the crystal structure, has the potential to affect the physical and chemical properties of minerals,5 even if present at only several parts per million by weight. For example, hydrogen influences the rheological properties of minerals and has been proposed as a possible factor in weakening hydrogen-bearing olivine in the convective mantle, while relatively dry olivine is thought to stabilize the cratonic mantle.6 Also, hydrogen favors the formation of fluids and melts within the Earth by lowering the melting temperature of rocks,7 affecting the chemical differentiation of the planet. Therefore, understanding the presence and transport of hydrogen in the Earth’s mantle is crucial to understanding planetary evolution and global dynamics.

We obtained results at 2 GPa and 750 to 900°C via hydrogen–deuterium exchange experiments coupled with nanoscale secondary-ion mass spectrometry analysis of the resulting isotopic profiles. Hydrogen diffusion profiles were successfully measured along [100], [010], and [001] directions of olivine crystals. We prepared the samples using a three-step procedure consisting of a dry anneal at high temperature, a wet anneal to saturate the samples with hydrogen at high pressure and temperature, and a final exchange anneal for the isotopic exchange at high pressure and temperature.12,13 In a recent multi-laboratory comparative study, sample PC28 was found to contain about 75-ppm-wt water,14 which is similar to samples from longer-duration experiments at similar conditions that are expected to be saturated by incorporation mechanism.15

The hydrogen–deuterium analytical profiles, quantified as 16O2H/28Si, begin at the edge and progress toward the center of the crystal, on a path perpendicular to the edge. We used high-resolution scanning electron microscopy to accurately determine the position of each nanoscale secondary-ion mass spectrometry crater (Figure 1). In all profiles, the hydrogen content decreased from the edge of the crystal toward the center. The hydrogen diffusion profiles in the [100] direction are much longer than those for [010] and [001] orientations (Figure 2). The 16O2H/28Si profiles (Figure 2) were fit to the solution to Fick’s second law of diffusion for a semi-infinite solid to obtain hydrogen self-diffusion coefficients, DH,[hkl], as a function of orientation,16 given in Miller indices, or [hkl]. 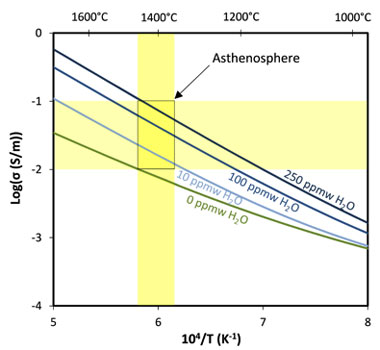 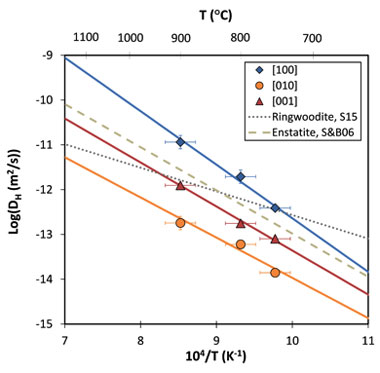 The temperature dependence of DH,[010] and DH,[001] were determined for the first time for olivine in this study. The DH,[010] and DH,[001] are 1 to 2 log units lower than DH,[100], which is consistent with hydrogen chemical diffusion coefficients reported for the reduction and oxidation exchange mechanism.17 The DH,[100], DH,[010] and DH,[001] all increase exponentially with temperature between 750 to 900°C, and were fit to the Arrhenius equation (Figure 3). The activation enthalpies (i.e., temperature dependence) are comparable to those of enstatite,18 and slightly higher than ringwoodite,19 suggesting a similar diffusion mechanism among different silicates (Figure 3). The magnitudes of the DH determined in this study suggest that mixed vacancy-interstitial diffusion in olivine is controlled by a dissociative mechanism,20 where an activated hydrogen dissociates from a magnesium vacancy and migrates as an interstitial particle until it is trapped again at another thermal vacancy.20 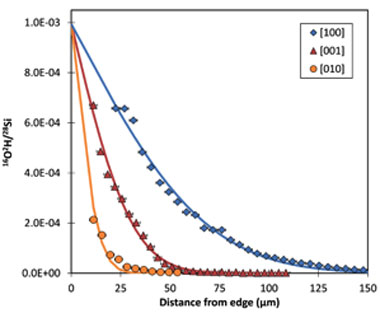 The electrical conductivity of the Earth’s mantle can be estimated using a geometric mean of the three principal orientations. The contribution of hydrogen was determined to be σH = 102.12 S/m • CH2O • exp−175 kJ/mol/(RT), where C is the concentration of water in ppm wt, and R is the gas constant. This approximation can be combined with any of the various models that have been published for electrical conductivity of nominally anhydrous olivine. The hydrogen-diffusion-based model compares favorably with the range of electrical conductivities values observed in the asthenosphere by magneto-telluric studies (Figure 4). Generally, this ranges between 10-1 S/m beneath continental lithosphere and 10-2 S/m beneath oceanic lithosphere.22 For depths of 120 to 240 km, roughly corresponding to where these anomalies are observed, pressure would be expected to increase from 4 to 8 GPa and temperature from 1,350 to 1,450°C based on adiabatic calculations.23 Olivine storage capacity would increase with depth from about 100 to 250 ppm wt based on these pressure and temperature conditions.24 The model in this study suggests that water contents below 250 ppm wt can account for most of the electrical conductivity anomalies observed by magneto-telluric soundings (Figure 4). Utilizing hydrogen partitioning parameterizations among upper-mantle mineral phases and predicted mineral abundances,25 the water content expected in olivine can be calculated for mantle assemblage with different overall water contents. The highest end of the range of mid-ocean-ridge basalt and ocean-island basalt mantle sources reported in the literature are approximately 200 and 1,000 ppm wt, respectively.26,27 For a mantle assemblage containing either 200- or 1,000-ppm-wt water at depths between about 120 and 240 km, the olivine would be predicted to contain 90- to 180-ppm-wt water and 470- to 900-ppm-wt water, respectively. The upper limit of 250-ppm-wt water inferred for olivine beneath oceanic lithosphere by this model therefore predicts mantle water contents that are close to those expected in mid-ocean-ridge basalt mantle sources, and well below ocean-island basalt mantle sources. 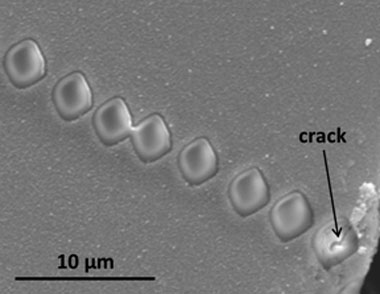 This work has extended our understanding of hydrogen diffusion and behavior of mantle materials and contributes to the knowledge base of materials science, especially under conditions of high pressure and temperature. This effort is relevant to the Laboratory's core competency in high-energy-density science, in which focused laboratory and computational experiments are recreating and characterizing conditions deep inside planets. In addition, our efforts may provide information on our climate, a delicate balance of complex systems, below, on, and above the Earth's surface, in support of the Laboratory's mission in energy and water security.

During this project, we produced the most comprehensive hydrogen self-diffusion data set to date. We used the results to develop a model for the electrical conductivity of hydrous olivine. Comparisons with geophysical observations from the upper mantle demonstrate that hydrogen self-diffusion coefficients are a promising tool for probing the presence of hydrogen in the Earth’s interior. Further investigation will allow the model to be used to map water contents regionally throughout the upper mantle. A deep-water cycle throughout Earth's history could explain why it has retained large bodies of water on its surface, unlike other nearby planetary bodies. The clearer snapshot of the current volatile distributions inside Earth in such an effort will give new insight on plate tectonics, planetary formation, and evolution. In addition to relevance to materials science, this research is expected to benefit understanding of our climate system, which depends on characterizing the flow of energy, water, and chemicals between the mantle, hydrosphere, and atmosphere. Furthermore, this project resulted in hiring a postdoctoral researcher and has led to successful, ongoing collaborations with Arizona State University and Cambridge University in the United Kingdom.