The Large Synoptic Survey Telescope (LSST) in Chile is the most comprehensive wide-field survey proposed to study dark energy to date. We propose to combine atmospheric and cosmological simulations and observations to enable the discrimination of dark energy models with the gravitational lensing observations planned with the LSST. We combined LLNL expertise in image simulation and LSST engineering that will be superior to performance of competing machine-learning methods in the community. The premier measurement of dark energy in the next two decades will be enabled by gravitational lensing of galaxies observed with the LSST. Gravitational lensing requires high-precision measurements of galaxy image moments, which is limited by systematic errors. Our research improved the physical modeling and simulation of dominant systematics, developed new algorithmic pipelines for improved lensing inferences with the LSST, and yielded near-term science results on dark energy from precursor data sets.

It is now well established that the expansion of the universe is accelerating, in contradiction to the deceleration that would be expected for a universe filled only with matter collapsing under self-gravity. This discovery, for which the 2011 Nobel Prize in Physics was awarded, has led astronomers to postulate a new component of the universe, dubbed dark energy. While the mean energy density and equation of state of the dark energy have been reasonably constrained with current observations, determining the nature of dark energy—whether a cosmological constant, new particle, or modification to gravity—will require constraints on the time or spatial variation of the equation state. This is a difficult measurement requiring mapping the cosmological expansion and matter perturbation growth rates over much of the volume of the universe.

The most promising probe of dark energy properties is the gravitational lensing, or shearing, of observed galaxy shapes by mass along the line-of-sight. Because typical lensing shears are 1% of the intrinsic galaxy ellipticities, many galaxy shapes are averaged within apertures or correlated across the sky to detect the lensing signal. Our research objectives were to develop physics-based image simulations and analysis algorithms to mitigate dominant gravitational lensing systematics to enable an optimal dark energy measurement with the LSST in Chile.

During the course of this project, we developed a new objective and deliverable to integrate gravitational lensing shear measurements into a probabilistic framework to also reduce the chief statistical uncertainty from the intrinsic scatter in galaxy shapes. This objective grew out of the opportunity to participate in a community data analysis challenge as well as recent results showing that traditional algorithms have hit a lower bound in achievable precisions. 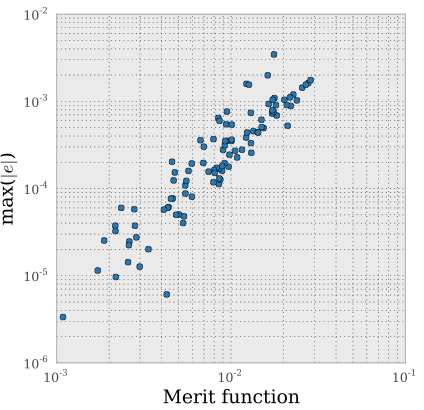 Figure 1. The point-spread function ellipticity for the Large Synoptic Survey Telescope is tightly correlated with the "merit function" used for the telescope's active optics image control. This validates that the telescope will deliver good image quality for gravitational lensing measurements.

The LSST has high throughput and will take relatively short exposures of 15 s. This is not long enough to average over the turbulent variations in the atmosphere. Furthermore, the physical models of atmospheric turbulence contain many uncertain elements that have not been constrained by observations. We adopted the turbulence simulations from other LLNL programs to forecast and validate the short-exposure LSST point-spread functions that could add biases to galaxy ellipticity measurements. Figure 2, which shows the second moment (i.e., ellipticity) of a simulated LSST atmosphere point-spread function as a function of exposure time, demonstrates that the moments have not converged to a stable value in a 15-s exposure. Results such as those in Figure 2 show that we must model LSST point-spread functions with a stochastic framework and suitable uncertainty propagation. 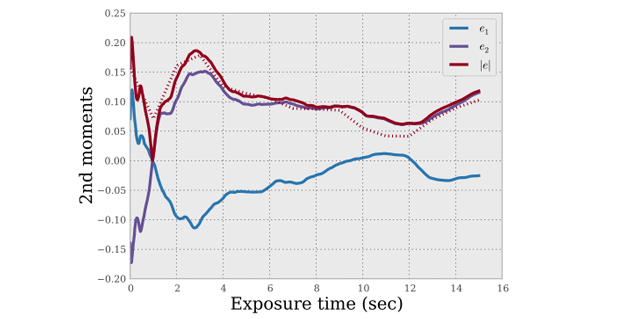 Figure 2. The point-spread function ellipticity of a star (e1 and e2 along the x and y axes in a two-dimensional coordinate system) varies significantly with the Large Synoptic Survey Telescope's exposure time because of atmospheric turbulence. The nominal 15-s exposure time is not long enough to reach a "long-exposure" limit, requiring detailed point-spread function simulations.

Gravitational lensing not only modifies observed galaxy shapes but also changes the observed fluxes and sizes via magnification. In this project, we derived an algorithm to improve the signal-to-noise ratio of lensing magnification measurements of galaxies by one order of magnitude based on optimal sample selections and optimal filtering.1 The LSST lensing magnification measurement can then be made at a comparable signal-to-noise to the lensing shears, but with complimentary systematic errors, allowing cross-checks of the error corrections in the data.

To propagate galaxy lensing shear and magnification correlation function measurements to cosmological parameter constraints, we must evaluate a likelihood function that includes a cross-covariance matrix of the cosmologically correlated errors of the lensing and galaxy clustering statistics. We showed that small errors in these covariance matrix estimators can have large impacts on the final dark energy measurements, thereby setting stringent cosmological simulation requirements for the LSST.2 We also demonstrated a computational mitigation strategy based on uncertainty quantification algorithms developed in other contexts.3

Blending of Galaxy Images by the Atmosphere

Using overlapping imaging of galaxies observed from space (Hubble Space Telescope) and the ground (Subaru Telescope), we identified a significant systematic error for the LSST in the way that the atmosphere blends together distinct galaxy images (see Figure 3). The idea of blending has been well known, but we showed that the magnitude of the effect is much larger than previously appreciated, affecting 30 to 50% of LSST galaxy images.4 Blending is a more significant issue for the LSST than precursor surveys because LSST imaging is much deeper, leading to larger resolved galaxy-number densities. 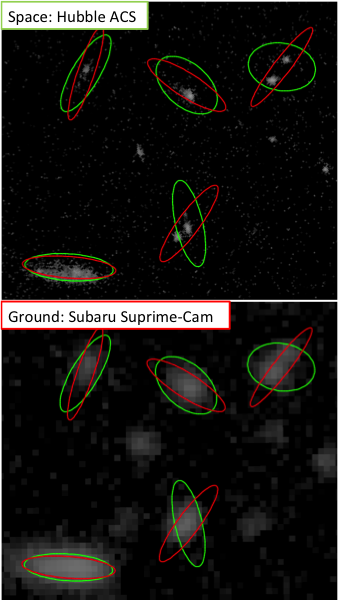 Figure 3. The atmosphere blends galaxy images together as seen from the ground (bottom) relative to what can be measured from space (top). Approximately 30–50% of the Large Synoptic Survey Telescope "galaxies" will actually be blends of distinct sources.

Because we showed LSST has unique requirements in disambiguating blending, the LSST Dark Energy Spectroscopic Collaboration created a new working group and collaboration deliverables to study algorithmic and ancillary data solutions. In particular, we established a new program, funded by the National Aeronautics and Space Administration, as a result of our blending studies. This program will utilize future space-based galaxy imaging to help LSST identify blended galaxy images.

The Deep Lens Survey is an LSST precursor survey with similar image quality and depth, but covering only 20 square degrees (versus the 20,000 square degrees planned by LSST) and with more noisy distance estimates for the galaxies (using only four photometric bands instead of the six for LSST). In collaboration with University of California, Davis, we calculated new dark energy constraints from gravitational lensing measurements in the Deep Lens Survey using our updated algorithms. Figure 4 shows joint constraints on the dark energy equation of state (w) and the mean mass density of the universe (Ωm), from tomographic cosmic shear in the Deep Lens Survey, building on previous two-dimensional constraints.5,6 Figure 4 also shows the constraints from other cosmological measurements, including the cosmic microwave background, galaxy clustering baryon acoustic oscillations, and type 1a supernovae. By improving the treatment of galaxy shear systematic-error corrections, galaxy redshift uncertainties, and covariance modeling in the data likelihood function, we achieved much tighter constraints on cosmological parameters than other surveys.7,8 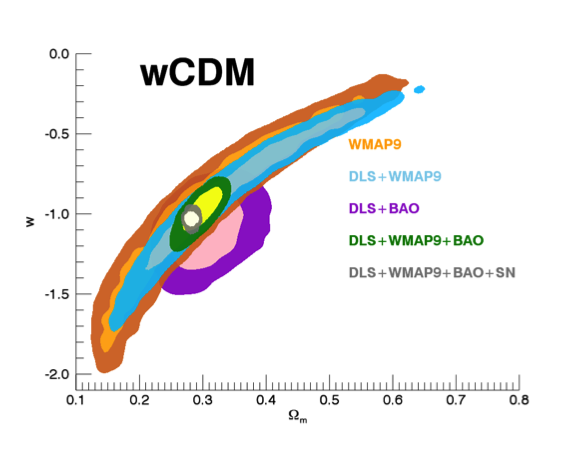 Figure 4. The gravitational lensing measurements for the wCDM standard model of cosmology (model for the universe consisting of dark energy, with equation of state w, and cold dark matter) in the Deep Lens Survey (DLS) yield the tightest constraints on the dark energy equation of state of all existing lensing surveys. WMAP9 is cosmic microwave background measurement, BAO is galaxy-clustering baryon acoustic oscillations, and SN is a type 1a supernovae.

We discovered that fundamentally new approaches of analysis were needed to overcome traditional limitations in both the precision and accuracy of cosmic shear measurements. Rather than calibrating systematic error corrections from image simulations mimicking the data, we created a statistical forward-modeling approach to shear inference.9 By forward-simulating instead of correcting, we can, in principle, achieve smaller systematic error residuals because we can model more features in the data, and properly include the correlations amongst data features. 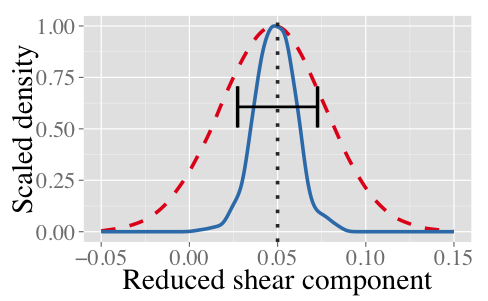 Another part of our pipeline involved statistical sampling via a Markov Chain Monte Carlo of parameters of source models of the raw charge-coupled-device images from LSST. (Markov Chain Monte Carlo is a technique for estimating by simulation the expectation of a statistic in a complex model.) We developed and validated this image-level processing pipeline by competing in the third Gravitational Lensing Accuracy Testing challenge, GREAT3.10 Our new approach scored well relative to existing and more mature algorithms, and has led to new algorithm development activities with the LSST projects.

The probabilistic image analysis algorithms we developed for measuring galaxy lensing shears can also be applied to other image-analysis applications focused on extracting features of sources in the images. We have built a new program for space surveillance based on the algorithms developed with this project.

The simulations and algorithms developed directly contribute to the creation of robust simulation codes that are a key element of LLNL’s core competency in high performance computing, simulation, and data science, as outlined in the Laboratory’s strategic plan. Our research also has applications to Livermore programs such as space situational awareness when using ground-based optical observations.

We established new simulation and algorithmic capabilities to mitigate dominant systematic errors and reduce the key statistical uncertainty in LSST dark energy measurements. Specifically, we developed new scientific expertise in areas of (1) modeling telescope optics and atmosphere turbulence, (2) gravitational lensing measurements, and (3) Bayesian image analysis. This new LLNL capability in Bayesian image analysis is being generalized under another LDRD project for Laboratory missions in space surveillance.Through ongoing programs funded by DOE and the National Aeronautics and Space Administration, we are translating the scientific advances from our research to project-specific algorithms for LSST. We also started new funded programs for dark energy projects under the DOE Office of Science and the National Aeronautics and Space Administration WFIRST-AFTA (Wide-Field Infrared Survey Telescope and Astrophysics Focused Telescope Assets) space-based dark energy mission concept.