We are exploring the development of a technology that enables the direct monitoring of nuclear reactors to determine the direction of incoming antineutrinos on an event-by-event basis. This monitoring capability supports our goal of reducing the threat of nuclear proliferation.

The existence of a sterile neutrino, one that does not interact with matter, has been proposed to explain the reactor neutrino anomaly (the phenomenon by which the number of antineutrinos emitted as a byproduct of the nuclear power generation process is always smaller than expected) and other observations. Its existence would imply physics beyond the Standard Model of particle interactions. The search for the sterile neutrino, therefore, has become a major focus of reactor neutrino physics research. Many reactor-based antineutrino experiments, including those focused on nuclear nonproliferation, rely on essentially the same technology, a liquid organic scintillator surrounded by photomultiplier tubes, which requires isolation from background noise and therefore must be situated deep underground. What is needed is a new background-reduction technique that can discriminate against the fast-neutron background, reduce the need for shielding, and enable aboveground deployment. We are testing a novel particle detection technique: a room-temperature liquid organic scintillator and noble-gas particle-tracking time-projection chamber (a type of particle detector that uses a combination of electric fields and magnetic fields together with a sensitive volume of gas or liquid to perform a three-dimensional reconstruction of a particle trajectory or interaction). The detector will have the potential to enable directional detection of reactor antineutrinos on an event-by-event basis. We will test the capabilities of this technology using small radioactive gamma, alpha, and neutron sources, and fully characterize its performance. If successful, this work will provide a new capability that will impact neutrino physics and nonproliferation by providing a way to discriminate against backgrounds. We will focus on state-of-the-art techniques to reduce impurities in liquid scintillators, based on recent experience in ultraclean scintillator-based neutrino experiments.

We are constructing a liquid organic scintillator purification system and a small ionization chamber to measure its performance. The purification system will employ the latest technology based on the recent solar phase of the Kamioka Liquid Scintillator Antineutrino Detector experiment near Toyama, Japan, and then test the system’s ability to drift free electrons in a selection of liquid scintillators. If successful (i.e., if we can drift electrons), we will build a small operational liquid and gas time-projection chamber that will, in principle, be capable of detecting reactor antineutrinos. The time-projection chamber has the potential to locate the direction of individual incoming antineutrinos, based on a reconstruction of the kinematics of the inverse beta-decay reaction, and to improve the energy and position resolution. Not only would event-by-event reconstruction constitute a powerful and (so far) unutilized discriminant against isotropic neutron-induced backgrounds, the improved energy and position resolutions would vastly improve the sensitivity of a sterile neutrino search, particularly if the sterile neutrino mass turns out to be large, resulting in very-short-period oscillations. For this project, we will use the detector to measure low-threshold energy performance metrics such as neutron recoil and gamma-ray and neutron discrimination. The technique has particular relevance to newly proposed neutrino experiments that will test the Standard Model of particle physics.

This project supports the core competency of nuclear, chemical, and isotopic science and technology at Livermore by testing a novel technology with the potential to enhance reactor antineutrino detection by reducing background noise and providing, for the first time, the capability to determine the direction of incoming antineutrinos. In addition, this project addresses Livermore’s research and development challenge in nuclear threat reduction by providing a new detection capability for directly monitoring reactor cores via the emission of antineutrinos, which is of particular interest to DOE’s Office of Defense Nuclear Nonproliferation. Finally, our work also supports the NNSA goal of strengthening the science, technology, and engineering base. 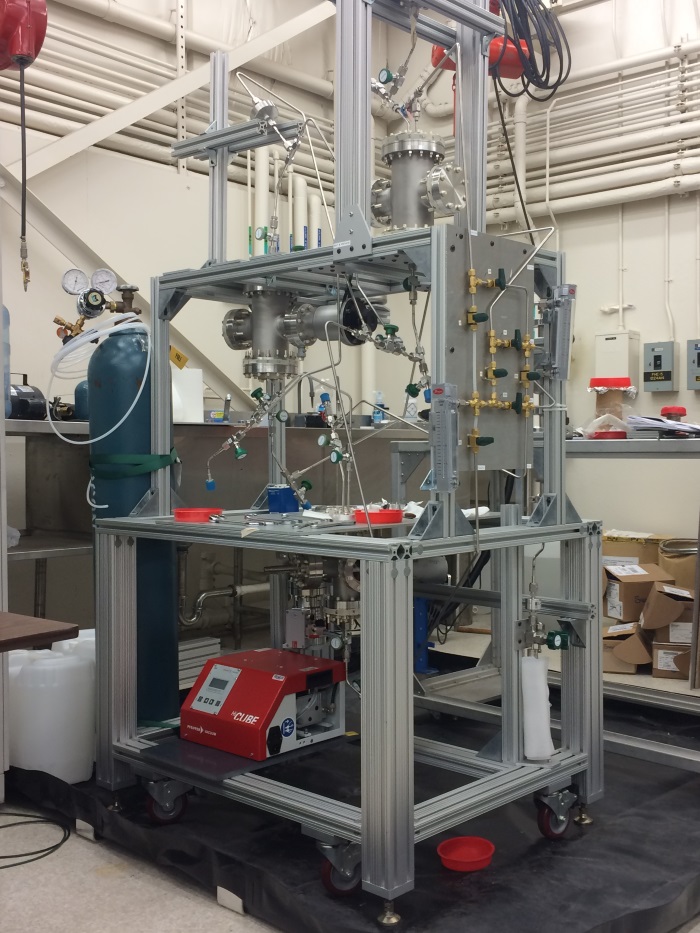 The goal of this project is to create a new detector technology for improving the sensitivity of a liquid scintillator to very small energy deposits. The organic liquid purification system is shown here. A combination of gravity feed and gas pressure moves the liquid from one chamber to another. Three chambers are shown. Liquid enters from the top and moves via the Teflon filter (top left) to the bubbler/vacuum degassing chamber directly below the filter. Once degassed, the liquid moves to the ionization chamber to check the charge drift capability of the purified liquid just below the table and above the turbopump. Once the charge drift is tested and confirmed, it will move to the main detector. The main detector is currently under construction.