In biomedicine and biosecurity, there is a need for new capabilities to quickly and reliably assess disease states and previous exposures to agents and illicit materials for individuals without the need for invasive procedures. Exhaled breath analysis is very promising in this context because the breath, called a "window into the blood,” allows analyses for a range of conditions or exposures that traditionally require blood draws or other invasive procedures. It is also hard to fool (hence the use of breath analysis for checks of driving under the influence). In the near future, breath analysis will be performed in real-time with small point-of-care or handheld instruments that integrate efficient breath sampling with miniaturized trace gas analyzers, electronic noses, or micro-fluidic assays for a wide range of applications. We intend to demonstrate the utility of breath analysis in two important emerging application areas that have remained largely unexplored: biomedicine and biosecurity. Human exhaled breath is very complex, containing a large number of trace gases including volatile organic compounds and nonvolatile trace compounds (e.g., proteins) embedded in exhaled aerosol droplets. It is now well established that both trace gases and non-volatile compounds found in breath can hold clues to the potential disease state of an individual. We are investigating the potential use of exhaled breath trace-gas analysis for screening patients for drug abuse, prescription drug compliance, and variations in individual drug uptake. In addition, we are evaluating its use for rapid screening of individuals for recent exposure to biological weapons during assessments and triage after a terrorist attack. We plan to perform demonstration experiments in these areas, find and characterize molecular signatures detectable in breath that can be used for the above applications, and develop concepts for miniaturized, real-time diagnostic devices that can detect the signatures in a single breath. State-of-the-art laboratory equipment available at Lawrence Livermore and through university collaborators will be used to perform this signature work.

If successful, we expect this project could have broad impacts for a large range of applications in biomedicine, biosecurity, and counterterrorism. We plan to demonstrate that exhaled breath trace gas analysis can help doctors to rapidly make informed assessments about a patient’s medication or drug condition, assess how a chosen drug is taken up and metabolized, or check for non-approved use of prescription drugs. Standards of the particular drug under study can be used to calibrate the response of analytical instruments used to detect the drug in breath. Our preliminary results in this area demonstrated that pseudo-ephedrine, the active ingredient in certain over-the-counter medications including Sudafed, could be detected in a subject’s breath for a few hours after two Sudafed pills were ingested. We will also demonstrate that exhaled breath trace-gas analysis could be useful for triage after a bioterrorist attack by rapidly and non-invasively determining exposure levels of individuals. Exposure to a biological weapon agent may be detectable in an individual’s breath shortly after inhalation of the agent (as the agent begins to proliferate and interact with human cells in the lung) long before the individual shows any clinical symptoms. Previous work has shown that most bacteria emit various trace gases while growing and that, in some cases, bacterial species can be discriminated based on the composition of these trace gases. Together with the compact breath-analyzer technology based on trace-gas analyzers likely to be developed, the molecular signatures we develop would enable unique new tools for screening and checkpoint applications in counterterrorism and public health response to large-scale events. It would also provide new capabilities for those on the ground in combat zones, for special operations and intelligence teams, personalized medicine, and point-of-care diagnostics. State-of-the-art analytical methods and instruments, such as gas chromatography in combination with mass spectrometry and other advanced types of mass spectrometry, will be used in the pursuit of our project’s objectives.

In FY17, we (1) set up a dedicated gas chromatography mass spectrometry system for sample analysis and performed calibrations and background characterization; (2) initiated breath sampling on patients taking known prescription drugs, as well as healthy subjects as controls; (3) designed, together with our colleagues at UC Davis, the sampling setup, defined the sampling strategy, and initiated the Livermore institutional review board application for this work; (4) measured trace gases emitted by biological agents growing on media or cell cultures; and (5) designed the headspace sampling setup, procured the necessary hardware and organisms, and performed extensive background studies on sampling hardware and bacterial growth media in preparation for cell-culture work. 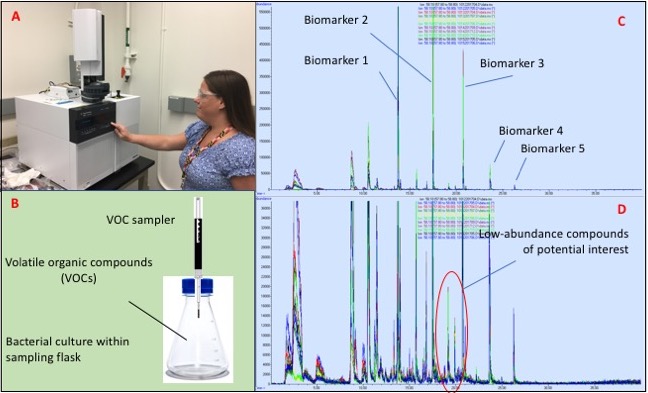 This project has two main components: (1) exhaled breath analysis for detecting drugs and (2) bacterial headspace sampling and analysis to establish feasibility of potentially detecting human exposure to biological weapons agents by detecting volatile compounds from bacteria in exhaled breath. A: A researcher operates a gas chromatography mass spectrometry (GC-MS) instrument that is used for detecting volatile organic compounds (VOCs) in human exhaled breath samples and in bacterial headspace samples. B: This image shows the bacterial headspace sampling setup used to collect VOC samples from proliferating risk group 2 bacteria used as surrogates for fully pathogenic risk group 3 bacteria that could be used as bioterror agents. C: In the results of a sample of a risk group 2 strain of biosecurity-relevant bacteria, the peaks are VOC compounds in the headspace sample that were detected and identified by the GC-MS instrument. D: This figure shows the same results on a finer vertical scale and reveals an additional large number of low-abundance compounds of potential interest.