Semiconductor laser diodes are the preferred light source to pump laser gain media because of their higher brightness and narrower emission spectra, which facilitate more powerful and more efficient laser systems for a wide variety of LLNL mission-relevant applications including fusion energy, laser-assisted manufacturing, and directed-energy systems. However, the fundamental limitation in state-of-the-art laser diode systems remains the removal of heat from the diodes to the cooling fluid. Improved cooling would extend both the lifetime and the use of these laser systems. We will develop a laser diode package that uses an ultrathin heat pipe or open-loop, two-phase flow system to conduct heat away from diode surfaces during continuous operation. We will utilize the Laboratory's expertise in micro-electromechanical systems packaging, material joining, heat transfer, and laser diodes to develop a solution that removes very large (greater than 1 kW/cm2) heat fluxes while maintaining a uniform diode temperature. By increasing power output per diode chip, this improvement will redefine the cost–performance relationship and expand the potential use of laser diodes for Laboratory missions.

We will investigate the use of a cooling-fluid phase change to enhance heat removal and thereby enable new applications. Specifically, we will deliver (1) a liquid–vapor phase change model for heat-pipe operation, (2) a working prototype for heat fluxes and related performance data, (3) an integrated laser diode and cooling-system package design, (4) a combined thermal and structural model of laser diodes and cooling systems, and (5) a fabricated one-bar laser diode and cooling-system package and related performance data.

This project supports Laboratory missions in national and energy security, and the strategic focus area in inertial fusion science and technology by expanding the lifetime and increasing the potential uses of semiconductor laser diodes, which are critical for applications such as laser inertial fusion energy, materials processing such as laser peening and laser-assisted deposition and cladding, and high-average-power lasers for directed energy, generation of mono-energetic gamma rays, and other scientific instruments. Fundamental research in expanding the potential for laser diodes is strongly aligned with the Laboratory's core competency in lasers and optical science and technology.

In FY15 we (1) built open cooling structures in a matrix of geometries and sent them to our collaborators at Colorado State University in Fort Collins for testing, (2) produced two design iterations based on testing—the open and closed devices now include an integrated heater to facilitate testing, (3) implemented improved manifold designs and interconnection design within the facility to improve testing, (4) demonstrated an interferometric measurement of channel whetting that measures wicking performance in real time during testing, (5) brought closed designs to their final stages of fabrication and built a customized filling and sealing station, (6) proved the sealing of the filling system to be leak-free in helium tests, and (7) made progress in modeling, capturing nucleate boiling in two-phase flows. 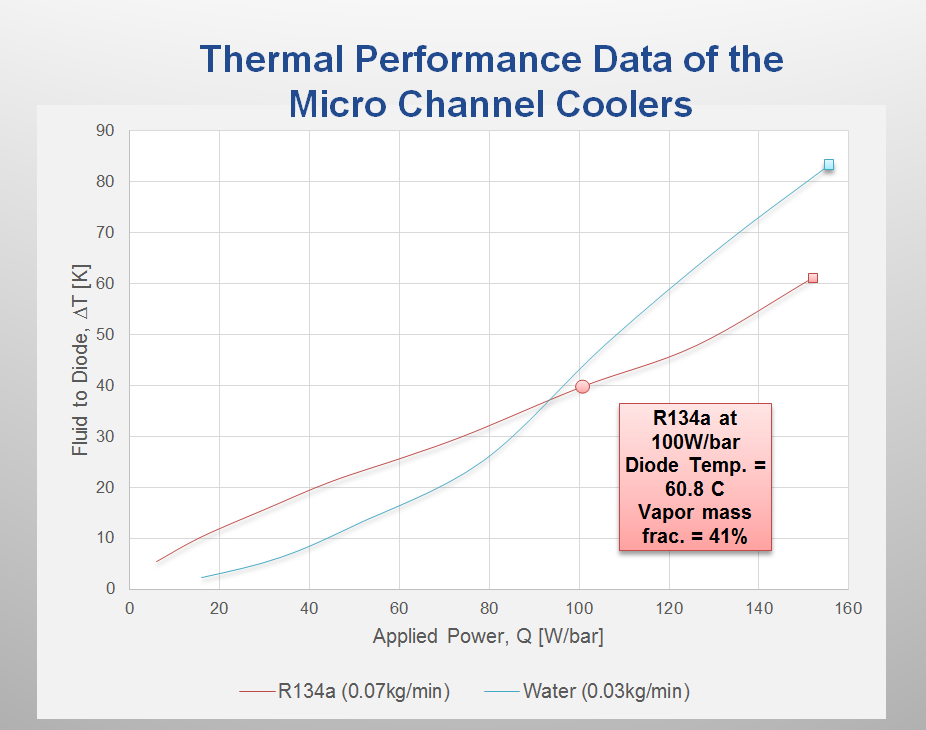 Performance data for our micro-channel coolers is shown for two working fluids. For a target diode temperature of 60°C, we are measuring over two times the laser brightness capability for the two-phase coolers with improved thermal performance and smaller diode spacing.