Many properties of the high-energy-density environments in nuclear-weapons tests, advanced laser-fusion experiments, the interior of stars, and other astrophysical bodies must be inferred from the resulting long-lived radioactive nuclei that are produced. These radioactive nuclei are most easily and sensitively identified by studying the characteristic gamma rays emitted during decay. The fission products 147Nd, 144Ce, 156Eu, and certain other long-lived isotopes play a crucial role in science-based stockpile stewardship. However, the large uncertainties (about 8%) on the branching ratios measured for these isotopes currently limit the usefulness of the existing data (Nica 2009; Reich 2012). We performed highly accurate gamma-ray branching-ratio measurements for a group of high-atomic-number rare-earth isotopes to greatly improve the precision and reliability with which the fission yield and reaction products in high-energy-density environments can be determined. We have developed techniques that take advantage of new radioactive-beam facilities, such as DOE's CARIBU, located at Argonne National Laboratory, to produce radioactive samples and perform decay spectroscopy measurements. The absolute gamma-ray branching ratios for 147Nd and 144Ce are reduced to <2% precision. In addition, high-energy monoenergetic neutron beams from the FN tandem accelerator in Triangle Universities Nuclear Laboratory at Duke University were used to produce 167Tm using the 169Tm(n,3n) reaction. A four-times-improved branching ratio of 167Tm is used now to measure reaction-in-flight neutrons from a burning deuterium–tritium (DT) capsule at NIF (A. C. Hayes, et al. 2015). This represents the first measurement of reaction-in-flight neutrons in any laboratory fusion system, and the magnitude of the signal has important implications for fundamental plasma science.

Many properties of the high-energy-density (HED) environments in nuclear tests, National Ignition Facility (NIF) shots, and the interior of stars and other astrophysical bodies must be inferred from the resulting long-lived radioactive nuclei that are produced. These radioactive nuclei are most easily and sensitively identified by studying the characteristic gamma rays emitted during decay. For example, one of the most straightforward and reliable ways to determine the number of fissions is to detect the characteristic gamma-ray radiation emitted from the long-lived fission products (147Nd, 144Ce, and others) that were produced. However, these gamma rays are emitted in only a fraction of the decays, and this fraction (known as the gamma-ray branching ratio) must be known accurately to determine the total number of fissions. In addition, the flux of reaction-in-flight (RIF) neutrons at NIF has recently been successfully measured by a Livermore–Los Alamos National Laboratories team from a burning DT capsule using the production of 167Tm via (n,3n) reactions on a 169Tm puck (Hayes, et al. 2015). The ratio of RIF neutrons to primary 14-MeV neutrons was determined by measuring the ratio of gamma rays from the decay of 167Tm and 168Tm atoms produced in the puck—the 167Tm atoms can only be produced by RIF neutrons with energies above 15 MeV via the 169Tm(n,3n) reaction, while the 168Tm atoms are dominantly produced by 14-MeV neutrons. However, the branching ratio of gamma-ray transition energy of 207.8 keV is known to 19% (Igamma=42±8%), per Experimental Nuclear Reaction Data).

Though the level schemes of the isotopes of interest are well known, there are certain challenges in measuring these gamma-ray branching ratios, mainly due to impurities, self-attenuation in the sample, etc. These challenges can be largely avoided by producing ultra-thin samples nearly free of radioactive contaminants at the Californium Rare Isotope Breeder Upgrade (CARIBU) facility in Argonne National Laboratory and measuring the absolute number of decays using a beta-gamma counter, which is essentially close to 100% efficient (Reich 2012), in conjunction with precision gamma-ray spectroscopy. The experimental approach to determining the gamma-ray branching ratios consists of the following steps: (1) produce ultrapure sources of 147Nd, 144Ce, and 156Eu using CARIBU beams, and (2) perform gamma-spectroscopy using a custom-made 4π gas proportional counter in conjunction with gamma-ray spectroscopy, using the precisely calibrated HPGe (High Purity Germanium Gamma) detector at Texas A&M University (Hardy et al. 2002; Helmer et al. 2003).

(1) Source Production We produced high-purity sources on thin (40 microgram/cm2) carbon-foil backings by harvesting isotopes at CARIBU. The CARIBU mass separator has a mass resolution of DM/M ~ 10E–4. Consider the example of a decay chain of mass 147, as shown in Figure 1. Within hours after implantation of the mass 147 isotopes, all the shorter-lived species decay to 147Nd. CARIBU can currently deliver ~10E5 ions/s of mass 147, so nearly 10E10 ions were collected in one day. A large volume of HPGe detector was used to monitor the implantation rate and provide additional information on the purity of the ion beam by looking for characteristic gamma rays from other fission products. Beta-delayed neutron emission will produce isotopes along the A = 146 chain, but the longest-lived isotope is 146Pr, with a half-life of 24.2 min; therefore all this radioactivity will decay away in less than a day. The A = 144 is the nearest mass chain with an isotope that has a half-life longer than one day (144Ce) and the presence of this isotope was monitored by measuring the 133.5-keV gamma ray emitted in 11% of the decays. The quantity of the 147Nd atoms collected using this technique in one day of CARIBU beam time were 1x10E10. These samples had sufficient intensity and few other radioactive contaminants. The produced source was shipped overnight to Texas A&M for the beta-gamma coincidence and X-ray spectroscopy measurements. 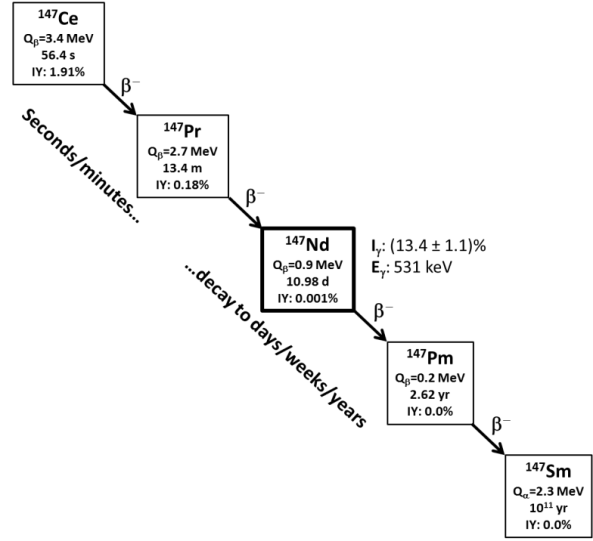 Figure 1. For the mass-147 chain, the independent yield (IY) from fission initially generates mostly 147Ce (and nuclei that decay to 147Ce and some 147Pr nuclei). These nuclei have half-lives of seconds to minutes, and beta-decay within ~2 hours to create a pure sample of 147Nd. The only remaining radioactive contaminant is 147Pm from the decay of 147Nd, which is a small background that can be precisely taken into account.

(2) Beta Spectroscopy The collected carbon foil was positioned in the center of the windowless 4π gas proportional counter for beta detection. This type of detector has a low-energy threshold of <2 keV and yields essentially 100% detection efficiency for charged particles. The low-energy threshold is crucial for decays such as 147Nd beta decay, which has a Q value of only 0.9 MeV and is very challenging to study by other techniques, because in over 50% of the decays, conversion electrons are emitted in addition to beta particles.

(3) Gamma-ray Spectroscopy The collected sources at CARIBU were gamma-ray counted using a large-volume HPGe detector painstakingly calibrated at Texas A&M, with an efficiency known to about 0.2% over the energy range of 50 keV to 2 MeV. The measurements, performed with and without coincident beta particles, were performed in the standard geometry.

The 169Tm(n,3n)167Tm-reaction cross-section and the branching ratio of the 207.8-keV gamma ray following the electron-capture (EC) decay of 167Tm were measured at the FN tandem accelerator in Triangle Universities Nuclear Laboratory (TUNL) at Duke University. The branching ratio was measured using the facilities at the University of California, Berkeley and the 88-inch cyclotron at Lawrence Berkeley National Laboratory. A thin holmium foil was irradiated using a 29-MeV alpha-particle beam, inducing the 165Ho(a,2n)167Tm reaction. The foil was counted using well-calibrated coaxial and planar HPGe detectors. The branching ratios for the emission of 207.8-keV and 531.5-keV gamma rays were determined with fractional uncertainties of approximately 3.8%. These uncertainties are five times smaller than previous measured results, according to Experimental Nuclear Reaction Data. Using this measured branching ratio for the 207.8-keV transition, a subsequent experiment was conducted to measure the 169Tm(n,3n)167Tm cross-section, as shown in Figure 2. The cross-section was measured with a precision of 5%–8% in the 17–22 MeV energy range, which is important for determining the RIF-neutron fluence at NIF. In addition, the cross-sections for 58Ni(n,2n) and 94Zr(n,a) were measured over the same energy range. 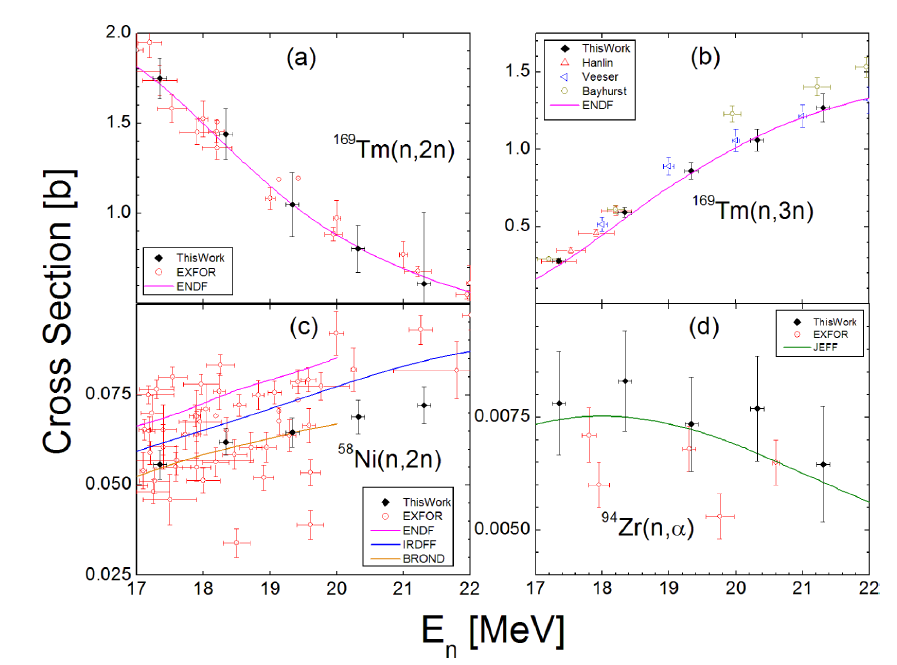 We addressed important nuclear-data needs for stockpile-stewardship science by exploiting new opportunities to harvest fission products and developing new techniques for precision decay measurements. This effort aligns with the Laboratory core competencies of nuclear, chemical, and isotopic science and technology and HED science. For several isotopes, nuclear data limits the precision with which conclusions can be drawn about HED environments and ignition fusion efforts (the flux of reaction-in-flight neutrons). Having a precisely-calibrated source and HPGe detector available at the Laboratory will be enormously beneficial to Livermore counting capability and can affect many strategically important programmatic missions, such as stockpile stewardship and nuclear forensics, by providing better nuclear data overall for fission. This additional capability may open new opportunities for Weapons and Complex Integration, Global Security, NIF, and the DOE Office of Science. The results of this LDRD should also prove important for WCI in the planning of their nuclear-data program, because they demonstrate the ability to produce 1% measurements of relevant branching fractions.

The 169Tm(n,3n)167Tm cross-sections provide reliable nuclear data that reduces the overall uncertainties on the measured RIF yield at NIF to about 5%–8% in an important energy region between 17 and 22 MeV. In addition, the absolute gamma-ray branching ratios following the electron-capture decay of 167Tm were improved by a factor of five.

We measured the gamma-ray branching ratios of four high-atomic-number rare-earth isotopes (neodymium-147, cerium-144, and thulium-167), with 1% to 2% precision, which greatly improves the nuclear data used to understand fission yield and reaction-in-flight neutrons. We developed an isotope-harvesting technique that can be used to make ultrapure radioactive sources at CARIBU and other radioactive-beam facilities, such as the Facility for Rare Isotope Beams at Michigan State University, and developed a 4π gas proportional detector that can precisely measure the branching ratios of any fission product or reaction product with a half-life over one hour. Finally, we attracted a postdoctoral researcher (Kay Kolos) and two graduate students (Brian Champine of UC Berkeley and Amber Hennessy of UC Irvine) to Livermore to assist with the challenge of developing new precision measurements of radioactive decay.

Using the 169Tm(n,3n) reaction at National Ignition Facility represents the first measurement of reaction-in-flight neutrons in any laboratory fusion system, and the magnitude of the signal has important implications for fundamental plasma science. The branching ratio and the 169Tm(n,3n) cross-section results provide more-reliable nuclear data for an important diagnostic that is used at the NIF to estimate the yield of reaction-in-flight neutrons produced via the inertial-confinement-fusion plasma in deuterium-tritium capsules.

Champine, B. 2015. "Cross-section measurement of the 169Tm(n,3n)167Tm reaction and constraining the branching ratio of 167Tm." Fall Meeting of the APS Division of Nuclear Physics, Santa Fe. LLNL-PRES-678879.