We tested the feasibility of using cosmogenically produced beryllium-7 (7Be) and beryllium-10 (10Be) isotopes to date concrete, a common tunnel construction material. A series of experimental concrete and concrete component samples were analyzed for 7Be and 10Be, which led to the following key findings:

This suggests that underground tunnels may be closed to 7Be/10Be so long as they are shielded from rain and other sources of water. Collectively, these results demonstrate basic feasibility of the 7Be/10Be concrete dating technique and suggest areas of further investigation.

Cosmogenic radionuclides (CRN) are produced in secondary particle cascades that result from the collision of highly energetic cosmic rays with nuclei in the upper atmosphere (see Figure 1). These particle cascades produce a variety of CRNs throughout the atmospheric column and within materials at or near the Earth’s surface. 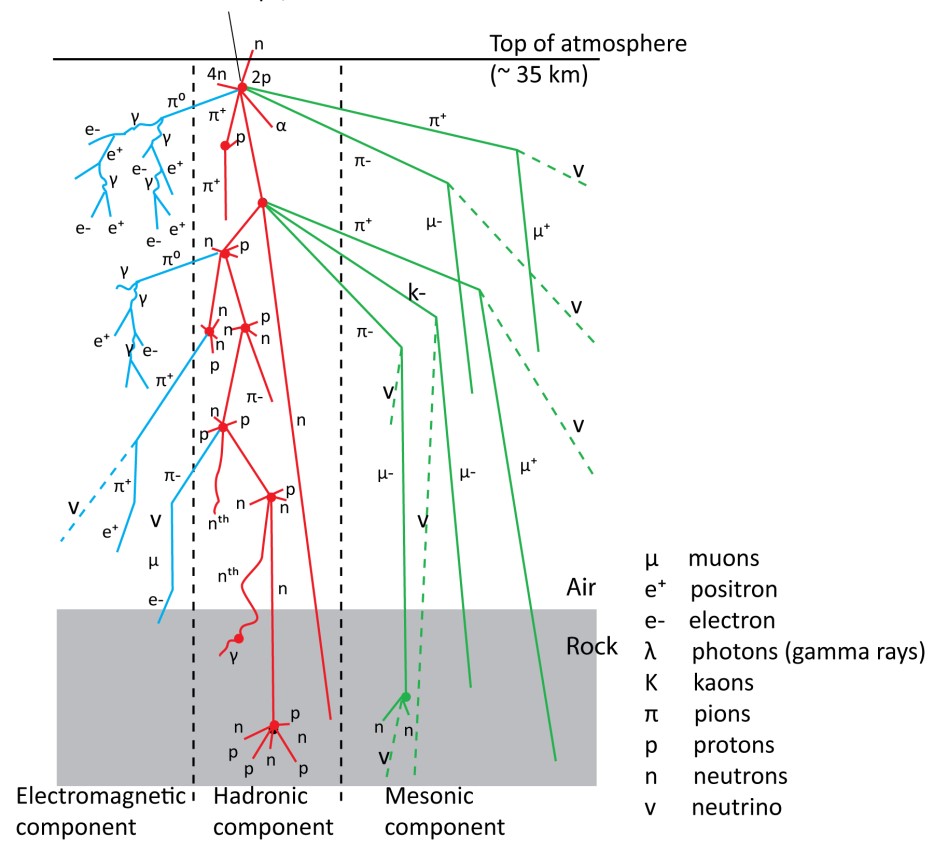 Figure 1. Particle cascade caused by the collision of an energetic cosmic ray with nuclei in the upper atmosphere (Gosse and Phillips 2001). This cascade is responsible for the production of a variety of cosmogenic radionuclides both in the atmosphere and at or near the Earth’s surface. Most production ends beneath 2–3 meters of rock and soil.

Underground tunnels (UT) represent a significant national security threat as they provide conduits for the transport of narcotics, weapons, and people into the United States. Recently, the U.S. Customs and Border Protection agency expressed interest in determining the age of UTs in order to infer their operational timescales. Unfortunately, due to the short timescale of interest (months to years), and the nature of dateable material typically available in UTs, there are currently no developed chronological tools available to address this problem. Here, we investigated the potential for using short-lived cosmogenic radionuclides to date construction materials found within tunnels.

Tunnel dating is based on the idea that materials can accumulate CRNs in two ways: (1) CRNs are produced in situ as a result of direct exposure to cosmic radiation at or near Earth’s surface prior to entering a tunnel; (2) CRNs are incorporated into the material during fabrication. Once shielded inside the tunnel—or after material fabrication—further accumulation of CRNs ceases and concentrations decrease predictably over time due to radioactive decay. Since CRNs have distinct, well-known radiometric decay rates, observing any short-lived CRN can place limits on how long materials have been underground. Also, ratios of two CRNs with fixed production rates can discern a unique age so long as initial ratios can be predicted and the system is isotopically closed. This burial age information can then be used to infer the operational timescale of the tunnel, and potentially even the direction for tunnel construction, assuming the time resolution of the technique is finer than tunnel construction time.

A series of controlled samples were collected and analyzed to demonstrate measurement capability and feasibility of using atmospheric 7Be (t1/2 = 52 days) and 10Be (t1/2 = 1.4 Ma) to date concrete. This specific isotope pair was targeted first for assessment because it was capable of resolving sub-annual ages, as well as requiring the least amount of technique development of other considered isotope pairs. This study led to the development of a new AMS capability for 7Be at the Center for Accelerator Mass Spectrometry (CAMS) facility at Livermore, as well as successful proof of concept for a CRN-based approach to dating tunnel materials. Additionally, we tested the feasibility of using decay counting over AMS as a means of detecting a variety of short-lived CRNs produced in situ in copper; however, this approach was not successful.

7Be and 10Be in Concrete

Chemical preparation and AMS measurement of 10Be from mineral samples are already part of routine operations at the CAMS facility in Livermore. However, an ultra-trace AMS capability for 7Be needed to be developed since concentrations were anticipated to be below the measurement capability of gamma counting. A modified sample preparation procedure was also required to extract beryllium from a concrete matrix. After establishing this capability and making necessary adjustments to the chemistry, a series of experiments was designed to test whether (1) 7Be and 10Be are detectable in concrete and concrete components, (2) concrete is a closed system to beryllium, and (3) duplicate measurements taken later in time were consistent with decay laws.

The experimental design is outlined in Figure 2. Slabs of concrete were obtained during an onsite pour in August 2016. One slab was kept sealed in an airtight container and used as a control sample. The other slab was split into samples and exposed to air and rain. For concrete samples exposed to rain, both exterior and interior surfaces were sampled. Additionally, concrete components were sampled to determine which components were sources of 7Be and 10Be. Dry components—sand, aggregate, and cement—were obtained from a local store. Sand and aggregate were stored outside in large bins exposed to the elements while the concrete was sealed inside a bag. Samples of tap, rain, and snow water were collected—tap water and two rain events in California; a snow event in central Utah. 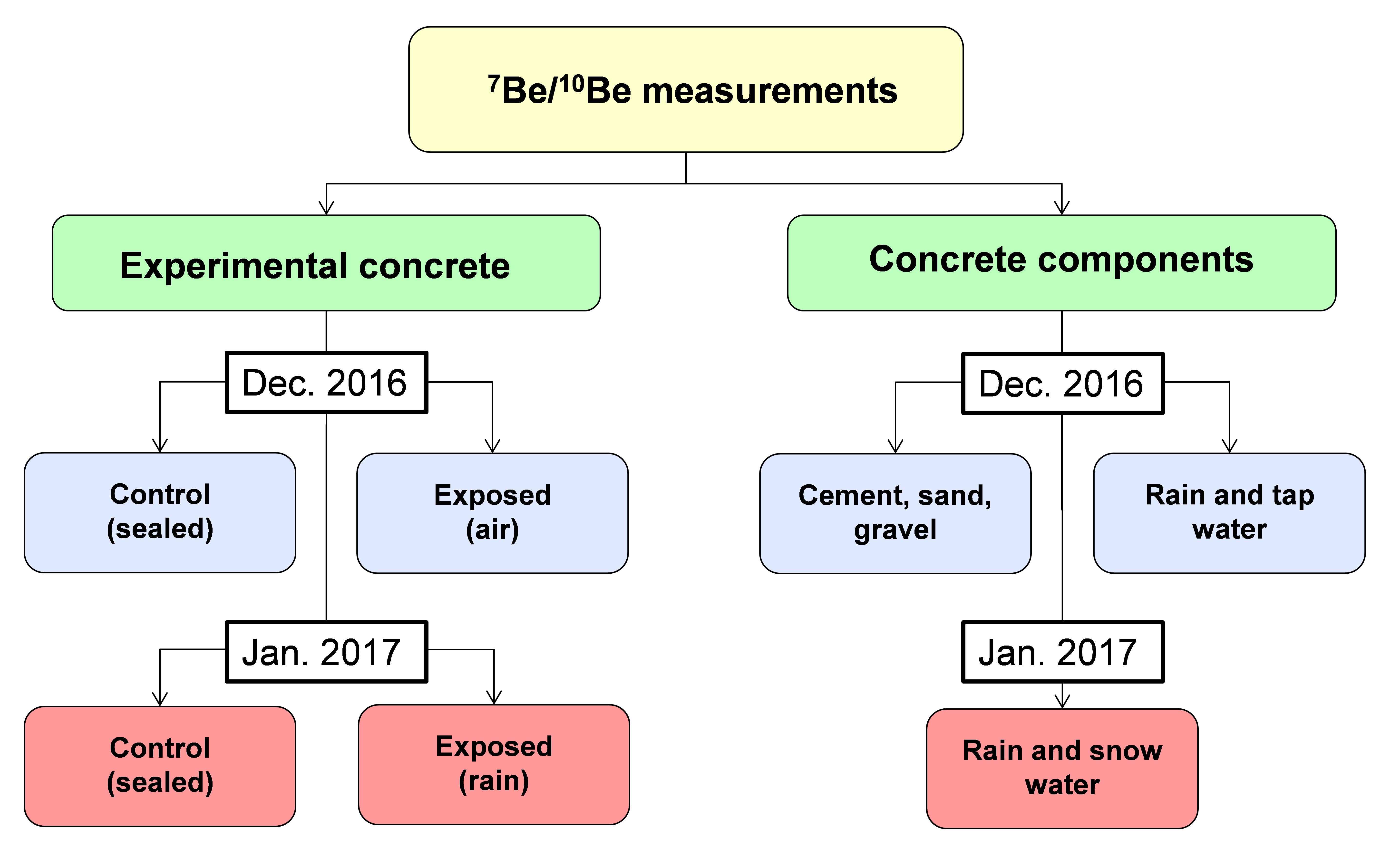 Accomplishment 1: A new ultra-trace 7Be capability was developed at the CAMS facility at Livermore. Protocols were established to tune the CAMS 10 MV tandem accelerator for 7Be analysis. These protocols were tested by creating and calibrating an in-house 7Be standard material using methods previously devised at Livermore and spiking it with known amounts of stable 9Be for isotope dilution (Gharibyan et al. 2016). Results from an isotope dilution series and process blanks demonstrated excellent agreement with expected values and implied a detection limit of approximately 1,100 atoms 7Be (see Figure 3). This limit is approximately two orders of magnitude lower than that typical of gamma counting at 105 atoms (Nagai et al. 2004). 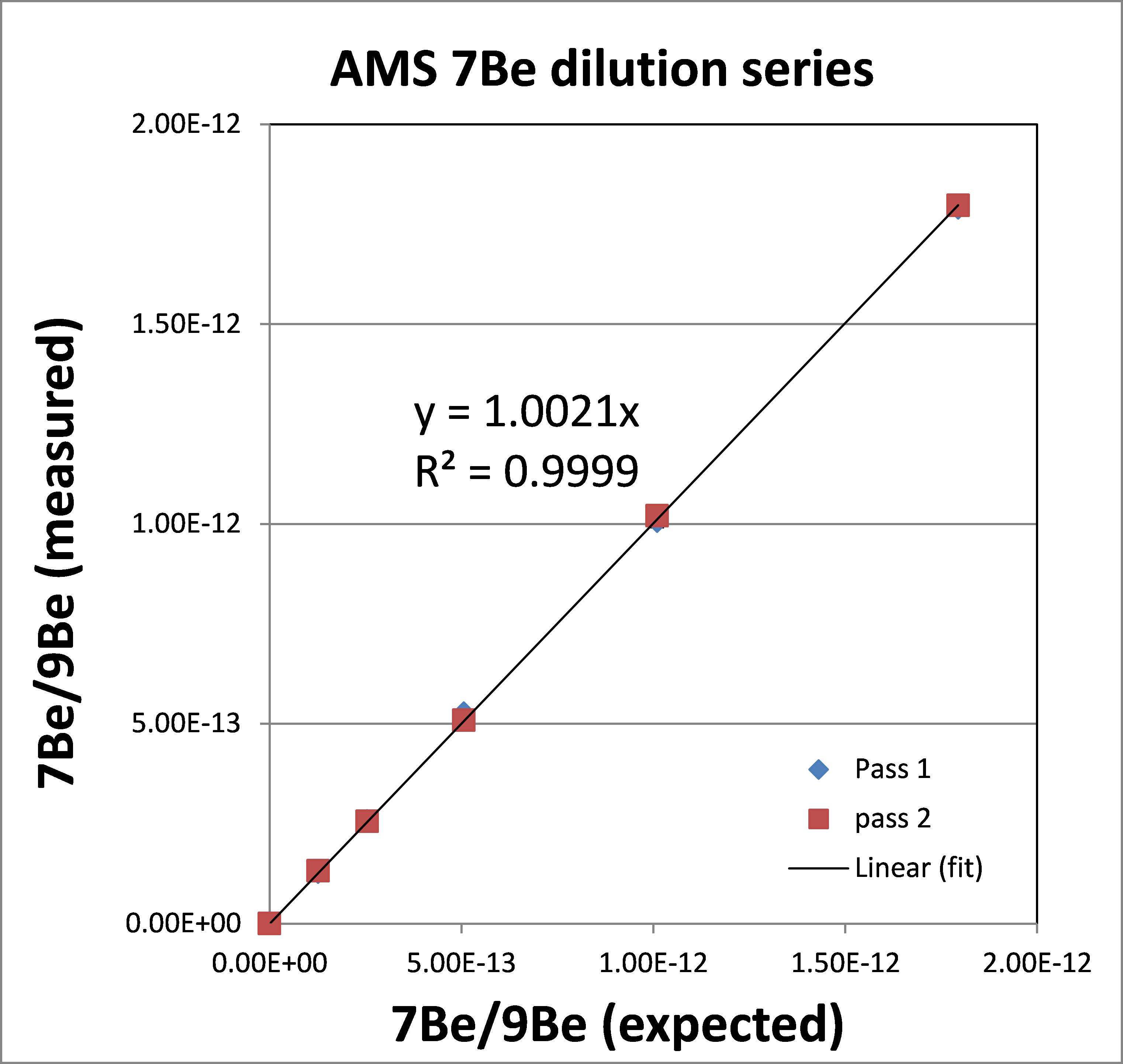 Figure 3: Results from a dilution series created from in-house 7Be standard, measured using Accelerator Mass Spectrometry (AMS). Nominal precision for each dilution is between 2–3%. Error bars are plotted, but are smaller than plot symbols.

Accomplishment 2: Existing sample preparation procedures were modified to extract 7Be and 10Be from concrete. The original procedure was designed for concentrates of the mineral quartz that limited major element impurities and facilitated clean extraction of Be+2 by ion chromatography. Because of the high abundance of calcium, aluminum, and iron in concrete, a separation procedure was adapted to remove these elements immediately following sample dissolution (Bourlès et al. 1989). This modification was successful at extracting beryllium for AMS analyses for concrete samples as large as four grams.

Result 1: Concentrations of 7Be and 10Be in concrete were measurable by AMS and changed as expected over time (Figure 4A). Measurements from the concrete control sample were taken 42 days apart. Based on isotope half-lives, we expected a 60% decrease in 7Be concentration and no change in 10Be concentration. This result was observed and demonstrates that age information can be obtained from concrete using this isotopic pair. 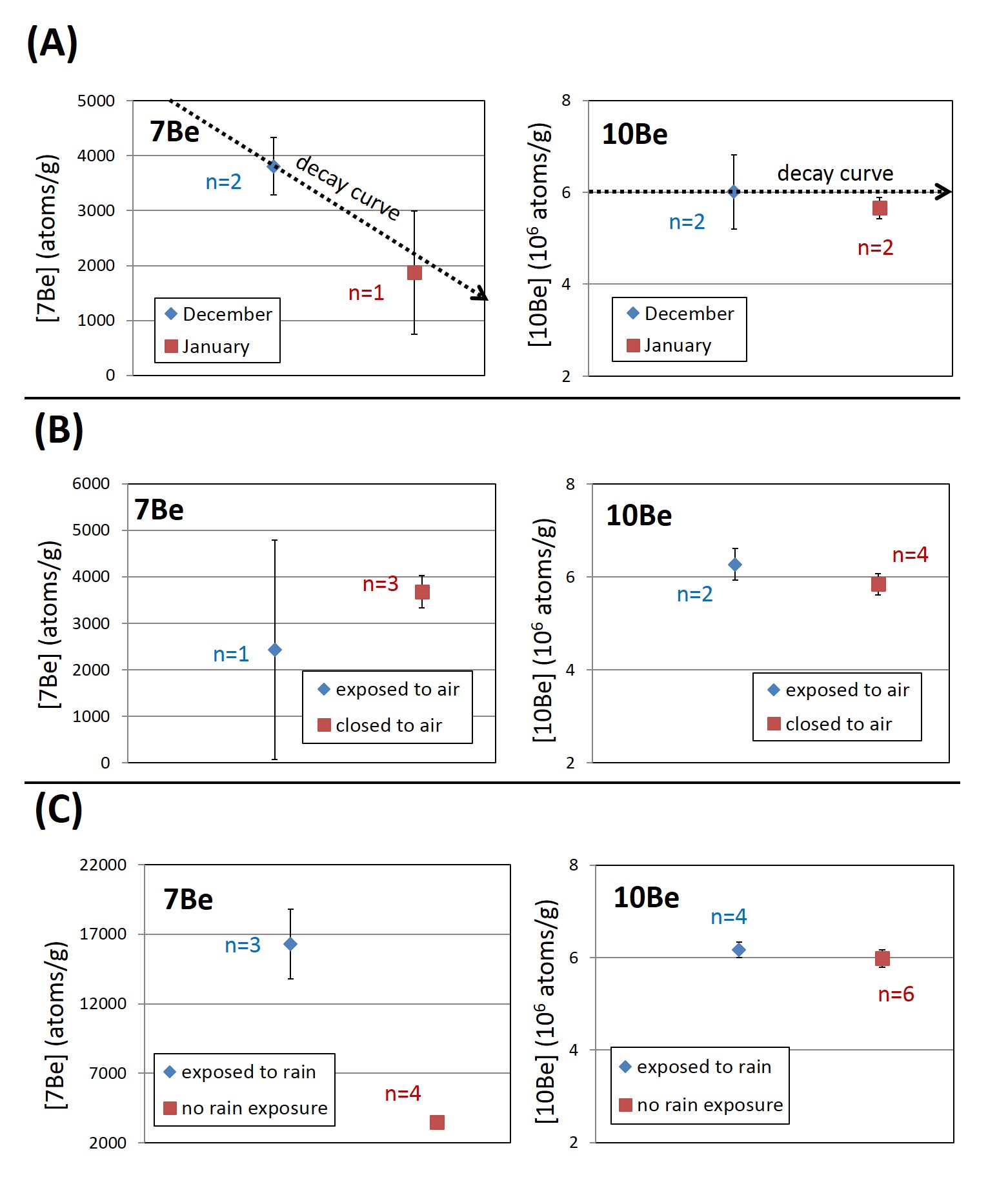 Figure 4. (A) 7Be and 10Be results from the concrete control sample taken at two points in time, (B) concrete samples exposed to air, and (C) concrete samples exposed to rain. Air exposure was indoors for 110 consecutive days. Rain exposure was for 12 consecutive days outside during a wet week in December 2016 (4.52 cm of total precipitation). The number of samples averaged for each point is represented by n value. Errors are 1ơ.

Result 2: Air exposure did not contribute significantly to the concentration of either isotope. Rain exposure contributed significantly to 7Be, but not to 10Be (Figure 4B and 4C). Excess 10Be from rain exposure was obscured by high levels of 10Be already present as observed in the control samples. For concrete exposed to rain, external and internal samples yielded elevated and identical results. Collectively, these results suggest that (1) if concrete is kept dry inside a tunnel it may be closed to 7Be and 10Be, while (2) wet concrete may be an open system for beryllium. Most tunnels would likely be shielded from rain; however, contact with groundwater or other water sources could complicate age interpretations made with this technique. An interesting consequence of negligible dry 7Be flux is that entire tunnels may themselves be isolated from atmospheric 7Be. If true, then 7Be detected in a dry tunnel may indicate operational activity within the last 1–2 years.

Result 3: 7Be and 10Be were found at measurable concentrations in all concrete components except tap water (Figure 5). For precipitation samples, isotopic concentrations and relative ratios were close to those expected from atmospheric sources (Nagai et al. 2000). However, 10Be concentrations in all dry components and concrete samples were several orders of magnitude greater than their conjugate 7Be concentrations (see Figures 4 and 5). Because of their respective half-lives, 7Be in surface material accumulates to saturation in less than 2 years while saturation of 10Be takes millions of years—their inherited concentrations are sensitive to very different timescales. Thus, this result is consistent with the dry components having a material source that has accumulated atmospheric 7Be and 10Be for a significant amount of time—thousands of years. This suggests that initial 7Be/10Be in concrete may be sensitive to dry component inheritance. Additional measurements from a variety of concrete sources would be necessary to determine whether this inheritance is systematic or highly variable.

Figure 5. 7Be and 10Be measurements from wet and dry concrete components. Errors are 1ơ.

Other Short-Lived Isotopes in Copper Wire

The feasibility of using gamma counting to measure CRNs produced in copper was also tested because (1) several short-lived, in situ cosmogenic isotopes are produced in copper at relatively high production rates (Laubenstein and Heusser 2009), (2) copper wiring is a common material found in UTs, and (3) gamma counting allows simultaneous measurement of a variety of short-lived nuclides. The basic idea was to measure a copper sample exposed at or near the Earth’s surface for a time long enough of approximately 1–2 years such that most short-lived CRNs would be saturated. Isotopes that were detected would be targeted for further investigation by this technique. Isotopes that were not detected at maximum saturation concentrations would be assumed to be unsuitable for investigation by gamma counting. Toward this goal, a 10 gram sample of copper was extracted from the wiring in multiple sets of Christmas lights left hanging outside for more than three years. The wiring was coiled into a cylindrical sample vial, and measured in a gamma counter for 30 days at the Livermore nuclear counting facility.

Result 4: No short-lived isotopes were detected in the copper wire above background. This result indicates that CRN dating of copper is not feasible via gamma counting, and that further investigation of this application would likely require development of an AMS approach.

The U.S. Customs and Border Protection agency is interested in the ability to date underground tunnels. We demonstrated basic feasibility of a tool capable of this, which is related to global security needs. The ultra-trace 7Be capability now established at CAMS is unique to the U.S. and is the most sensitive in the world. Because 7Be is also a powerful tracer of short-term soil and watershed processes, and it has numerous potential applications that include investigating carbon storage for climate security and agricultural soil health for food security. Further exploitation of this sensitive capability has already been sought internally, as well as externally with the U.S. Forest Service.

This project produced the following results:

Further research in this area will validate the 7Be/10Be concrete dating methods with samples from actual underground tunnels. This will involve sampling a suite of tunnels with known ages—including some old enough such that no 7Be should be detected. Upon validation, further investigation can focus on testing the sensitivity of initial 7Be/10Be to different source materials and environmental conditions, and determining routes of 7Be and 10Be transport into tunnels—such as ground water, dust, and human activity.