Algorithms are needed that improve performance and extend capabilities of spectral laser sensors to detect scarce materials or gases for a wide variety of intelligence, surveillance, and reconnaissance applications. Likewise, algorithms that improve performance of remote sensors already in service, as well as for next-generation sensor systems currently under development, are also desired. The information processing chain for sensors is assumed independent of the hardware, having relative minor impact on system performance. It is generally assumed that differences in performance are mostly because of hardware differences between systems and that the processing chain is generalized to yield optimal performance to all systems for all conditions. We plan to select two algorithm domains important to existing sensor systems that address two performance issues, namely coverage rates for active systems and structured noise in mercury–cadmium–telluride focal-plane imaging arrays. Changing the operation and processing paradigm of these two problems can realize a minimum of tenfold performance improvement for each sensor type, significantly increasing the utility of these sensors. These solutions will be experimentally validated in the laboratory using archived data sets. Algorithms we develop will be integrated into operational systems and validated for performance.

We expect to enable a tenfold improvement in active sensor coverage rates and detection and identification performance, with an equivalent reduction in false alarms. These results extend the range of useful applications for both active and passive sensors. Success will significantly aid in an operational sensor applied to nonproliferation objectives for remote detection and detection of solids. The benefits include increased sensitivity, reduction of false alarms, and improved cost benefit from higher coverage rates, all of which directly impact the end-to-end performance. These performance enhancements will lead to improvements in capabilities benefiting national security missions, and will enhance Livermore's role in sensor technology for the intelligence community.

Improvements in sensor performance are central to the Laboratory's strategic focus area in cyber security, space, and intelligence. In addition, this research has applications in a wide range of national security missions, and is applicable to LLNL's core competency in nuclear, chemical, and isotopic science and technology.

In FY15 we (1) implemented a cost function in the bad-pixel replacement algorithm that locally optimizes low-noise replacements to mitigate false alarms generated by the algorithm, (2) validated generation and removal of structured scene noise with a Denali sensor (a DOE long-wave infrared hyperspectral imaging sensor with 258 spectral channels) for a set of known targets, (3) found that spectral clutter at different scales varied significantly more than between different collections that included desert and temporal climates for materials of interest, (4) improved spectral reconstruction via the Tikhonov smoothing regularization for finding a model that best fits observed data while eliminating random variation, (5) implemented a mixed-integer quadratic optimization program to maximize the adaptive coherence estimator (an algorithm for detection of point targets) detector response with minimum spectral bands, and (6) demonstrated simulated 50 to 1 compression from a single spectral detector. 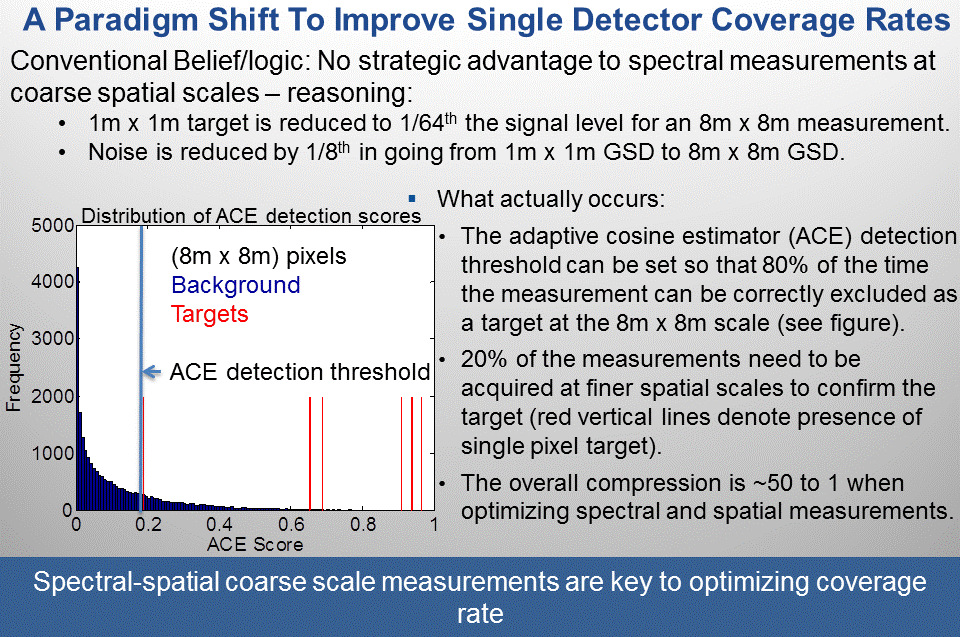