Nuclear Fission in a Plasma

This theory project was undertaken to study the fission process that take place in extreme astrophysical environments, such as in the crust of neutron stars, and, to an extent, in Lawrence Livermore's National Ignition Facility. In the first part of the project, the effect of electron screening on the fission process was explored using a microscopic approach. These calculations were carried out to the breaking point of the nucleus, for the first time. In the second part of the project, the population of the fissioning nucleus was calculated within the same microscopic framework. These types of calculations are extremely computer-intensive and have seldom been applied to heavy deformed nuclei, such as fissioning actinides. The results, tools, and methodologies produced in this work will be of interest to both the discovery-science and nuclear-data communities.

Fission plays a critical role in the nucleosynthesis of heavy elements. However, fission-fragment properties have never been calculated for astrophysical plasmas in 75 years of fission physics research. Some of the same physics will also play a role in fission at the National Ignition Facility. Nuclear fission can be significantly altered inside a plasma. In environments such as the crusts of neutron stars, extremely high electron densities can alter fission by screening the Coulomb repulsion that normally drives the process. In addition, high particle fluxes in those environments could induce fission from excited short-lived nuclear states, a phenomenon that would be difficult or impossible to study in terrestrial laboratories. This project was carried out to better understand and quantify these effects, focusing first on the fission process itself and, in the latter part of the project, on the population mechanism of the fissioning nucleus. Our theory effort focused on plutonium-240 fission in those environments, with similar effects expected for other actinides. To calculate the effect of both neutron-star and National Ignition Facility plasmas on fission, we built on existing Laboratory codes and techniques for the microscopic description of fission and incorporated nucleus and plasma coupling.

A microscopic approach was used in this project to study fission. In this approach, the nucleus is constructed starting from protons, neutrons, and an effective (i.e., in-medium) interaction between them and solving the nuclear many-body problem. To calculate the effect on fission of a high-density background of electrons, we modified the Coulomb interaction to include screening effects. The energy of the fissioning nucleus, in this case, plutonium-240, was calculated with the modified Coulomb interaction as a function of deformation (or quadrupole moment) along the most probable path to scission, the point where a nucleus breaks into two or more fragments. The resulting energy curves are shown in Figure 1(a) for several electron densities. In the no-screening limit, the curve displays the well-known double-humped shape, with barriers at quadrupole moments of approximately 50 and 130 b. As the electron density increases, the higher-deformation part of the energy curve rises, inhibiting fission. At a density of approximately 7 × 1036 electrons/cm3, which corresponds to the curve labeled by the ratio of electron to normal proton density, ρe/ρp = 1.1 × 10−1 in Figure 1(a), thermal fission, which is readily observed in terrestrial laboratories, no longer occurs. These very high electron densities, and even higher, are expected in the crusts of neutron stars. Even at lower densities, for example the curve labeled ρe/ρp = 1.3 × 10−2 in Figure 1(a), there are already significant modifications to the energy of the fissioning nucleus, especially at the higher deformations. These results are in agreement with calculations up to just past the first barrier—that is, up to approximately 100 b in Figure 1(a). Beyond this point, the calculations stop.1

The results in Figure 1 represent the first calculations ever of fission inside a high-density electron background carried out all the way to scission. We have also extracted from our calculations the average binding energies of the neutrons and protons in the nucleus as a function of the electron density—these are shown in Figure 1(b). Effects as large as 20% on the proton's binding energy can already be seen for electron densities of ρe/ρp = 10−3 (i.e., a ρe of approximately 6 × 1036 electrons/cm3). These extreme densities can never be approached in any terrestrial experiment, and theory is the best tool we currently have to study nuclei under these extreme conditions. 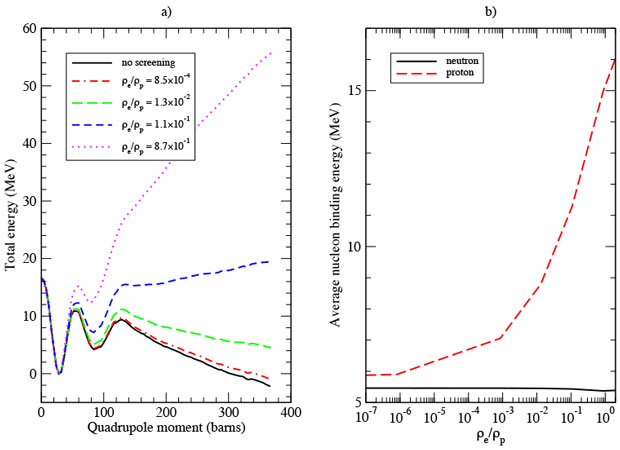 Figure 1. (a) Energy curves for plutonium-240 as a function of quadrupole moment. The curves are labeled by the ratio of electron (ρe ) to proton (ρp) number densities (with ρp = 6.3 × 1037 cm−3). The no-screening label implies ρe = 0. With increasing electron density in the plasma, the energy curve rises for the larger deformations, and fission becomes increasingly inhibited. (b) Average neutron and proton binding energies for plutonium-240 in its ground state, as a function of the electron-to-proton density ratio.

In the second part of our project, the population mechanism of the fissioning nucleus was studied in the microscopic approach. The main focus of this effort was to calculate the spectrum of excited states in the nucleus and the strength function, which quantifies the probability of excitations to those states. This endeavor is based on work in which this approach was applied to a variety of nuclei including uranium-238.2 The main tool used to generate the excited nuclear states is the so-called quasiparticle random-phase approximation. The most fundamental type of excitation in the nucleus consists of a single nucleon being promoted to a higher energy level, and leaving a hole behind. This is a so-called “particle-hole” excitation. The quasiparticle random-phase approximation describes excited states of the nucleus as coherent superpositions of particle-hole excitations. The effective interaction between nucleons introduces correlations between the various particle-hole excitations, and the quasiparticle random-phase approximation incorporates those correlations to produce a more realistic description of the excited states of the nucleus. This increased realism comes with a significant computational cost, which is why this technique is rarely applied to heavy deformed nuclei, such as actinides, and even then the use of this approximation tool often necessitates truncations and approximations to make the calculations tractable. A quasiparticle random-phase approximation code was written for this project and applied to the calculation of excited states in plutonium-240. Figure 2 shows the strength function calculated using this code for plutonium-240. The structure that can be seen in this plot in the approximately 7- to 15-MeV region corresponds to the so-called giant dipole resonance, which is caused by the coherent motion of the neutrons and protons relative to one another. 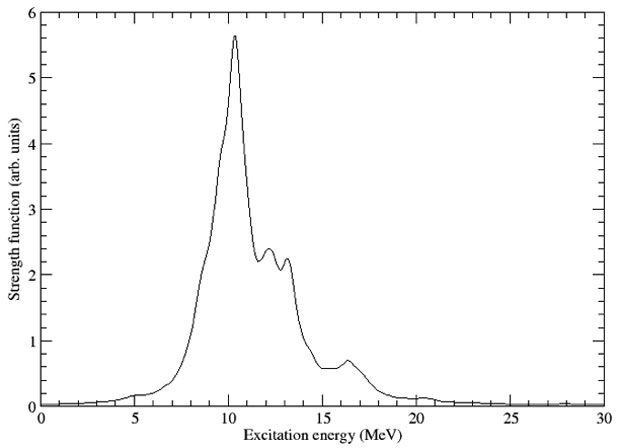 Figure 2. Plot of the isovector dipole strength function for plutonium-240 as a function of excitation energy.

This project is of direct relevance to the Laboratory's nuclear, chemical, and isotopic science and technology core competency by calculating nuclear properties in plasma environments, addressing fundamental questions in the nucleosynthesis of elements heavier than iron, and shedding light on formation of the heaviest elements in nature by studying fission—the process that limits the maximum size of those elements in the astrophysical environments where they are born. Furthermore, this project developed a critical capability for studies at the interface between nuclear and high-energy-density science that will directly benefit the analysis and interpretation of nuclear diagnostics at the National Ignition Facility, and more generally advance stockpile stewardship science.

This research contributed to our basic understanding of the fission process and the physics of nuclear reactions that populate excited states in nuclei. In our project, we studied how the fission process can be altered in the extreme environment found in the crust of neutron stars and calculated strength functions relevant to the population of nuclei in those environments, as well as in terrestrial laboratories. We quantified the degree to which fission is inhibited by electron screening inside the crust of neutron stars and calculated the population of the giant dipole resonance in a fissioning nucleus. These results were obtained with a microscopic approach, starting from protons, neutrons, and an effective interaction between them. The tools and techniques we developed are of interest to both the discovery-science and nuclear-data communities, and can be used to improve nuclear data evaluations for many practical applications. Support to continue this research is being sought within those communities.