Large-Scale Energy Storage in the Earth

The objective of this study was to evaluate the technical feasibility of the Air Earth Battery energy-storage system and to estimate its installed costs. To accomplish this, we built a power-system/installed-cost analysis tool and a suite of reservoir models, using the Nonisothermal Unsaturated Flow and Transport (NUFT) code (Hao et al. 2012). While most of this effort was directed at commercial-scale deployment, we also analyzed pilot-scale operations. Because our concept relies heavily on an engineered earth system with its associated uncertainties, we made an effort to identify key performance measures quantifying subsurface energy losses that control the round-trip efficiency. We designed and conducted a reservoir study that addressed a sufficient range of conditions to evaluate the impact of uncertainty on the subsurface performance measures. We applied these insights to develop a system design and operational approach that can manage, and compensate for, subsurface energy losses.

Large-scale energy-storage systems are needed when there is a mismatch between electricity generation and demand rates. The mismatch occurs because solar power-generation rates are cyclic and are often out of phase with the demand cycles, and wind-power generation rates are unpredictable. On the other hand, high-efficiency, low-carbon (e.g., nuclear) power plants typically have high capital cost and low operating cost. Such plants are designed for continuous base-load operation, however, they require a high capacity factor to be economically viable. For these reasons, it is advantageous to be able to store energy when not needed and use it when it is needed.

We developed the Air Earth Battery to accomplish the task of energy storage and dispatch, using a combination of compressors, expanders, heat exchangers, and subsurface, porous, permeable rock formations. This process utilizes technologies backed by two U.S. Patents (Buscheck 2017a; Buscheck 2017b).

The Air Earth Battery stores energy as pressure and heat. In its basic configuration, it functions as a closed loop, with the necessary heat being entirely generated as a byproduct of air compression. It can also add heat energy from other sources: solar, nuclear, geothermal, or fossil fuels.

Air is compressed in a series of compressors. The resulting hot, compressed air is cooled using relatively cool brine produced from cold-brine production wells. The cool compressed air is stored underground in a porous rock formation overlain by an impermeable caprock, as is the hot brine. The pressurized cool air and hot brine are produced when needed. The produced cool air is heated by the hot brine prior to being sent through each of a series of expanders, providing mechanical work. The now cool brine is returned to the hot-brine storage reservoir using cold-brine injection wells that surround the hot-brine wells to maintain a mass balance of brine and provide pressure support. (See Figure 1.) 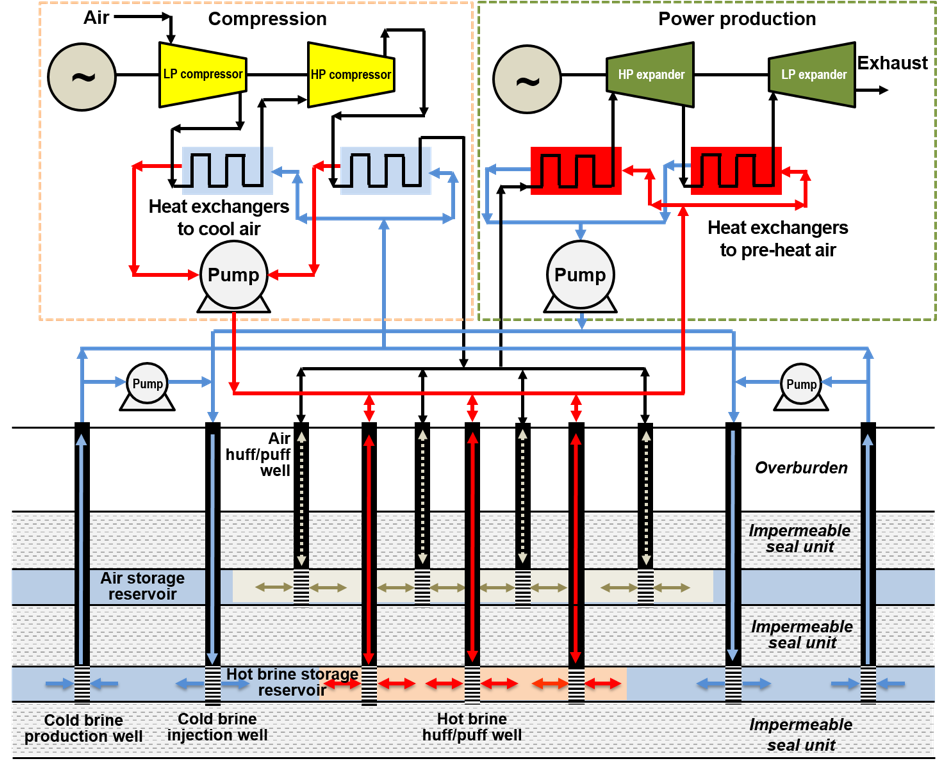 This study began with a process design based on a scheme for the charging and discharging cycle. We used standard thermodynamic relationships, such as the ones described in Perry’s Handbook (Perry 1985) to calculate the work of compression/expansion and the resulting temperatures. We also employed user-supplied estimates of compressor/expander efficiencies and well configurations, including depths and locations with respect to the processing plant, assumed to be at the center of the well-field.

We then designed the air and brine reservoirs, beginning with a CO2 version of the Air Earth Battery (Buscheck et al. 2017a; Buscheck et al. 2017b) that used a concentric-ring well design that locates the hot-brine storage zone outside of the supercritical CO2 storage zone. We then used the same configuration for storing compressed air and heated brine. The large viscosity and density contrast between native brine and air was found to allow the eventual breakthrough of air at the brine production wells, which reduces air mass efficiency. The air mass efficiency is defined to be the fraction of the injected air that is available to generate power. To maximize air mass efficiency, we decided to analyze a simpler design with compressed air and hot brine stored in separate reservoirs. We examined the air- and brine-reservoir storage in both commercial- and pilot-scale plants; then we performed reservoir analyses using the NUFT code and models such as those used in previous studies of multi-fluid geothermal energy systems (Buscheck 2014a; Buscheck 2014b; Buscheck 2015).

Because a major component of our concept is an earth system, with its inherent uncertainties, we identified key performance measures quantifying subsurface energy losses that control the round-trip efficiency of the Air Earth Battery. They are as follows.

During this study, we made the following key findings:

This study supports Livermore's competencies in computational geosciences, advanced energy systems, and high-performance computing. This study also supports the DOE and NNSA goals of timely, material, and efficient transformation of the nation’s energy system and the securing of U.S. leadership in clean energy technologies while maintaining a vibrant U.S. effort in science and engineering as a cornerstone of our economic prosperity. Because our technology stores energy underground, it can be deployed as a hardened, resilient storage system that ensures that energy is available when needed and helps safeguard national security.

We analyzed the technical and economic feasibility of using huff/puff wells to store compressed air and the waste heat of compression as heated brine in two porous, permeable storage formations, each overlain by an impermeable caprock that contains the buoyant pressurized fluids. During this study, we developed the necessary power-system and economic-assessment tools, along with a suite of reservoir models that use the NUFT code. We applied these tools to develop and refine a base-case energy-storage system design, including above ground and below ground components to manage flow rates and pressures that can sustain energy storage operations for at least 60 years.

We identified the key performance measures that influence the round-trip efficiency of the Air Earth Battery: (1) air mass efficiency, (2) pressure in the air storage reservoir, (3) pressure loss ∆P in the air storage reservoir, and (4) temperature loss ∆T in the hot-brine storage reservoir. Of these measures, air mass efficiency and temperature loss are the most important. The impact of fluid, pressure, and heat loss can be managed and reduced in the design and operation of the well-field. Our study indicates that the Air Earth Battery is technically feasible. An assessment of its economic viability will depend on individual electricity markets, which will be the subject of future investigations.

Graf, R.E. 2012. Centrifugal Expanders and Compressors Each Using Rotors in Both Flow Going from Periphery to Center and Flow Going from Center to Periphery Their Use in Engines Both External Heat and Internal Combustion. Means to Convert Radial Inward Flow to Radial Outward Flow with Less Eddy Currents. US Patent 20140186170 A1, filed December 27, 2012, and issued July 3, 2014.