Vibrational and Optical Properties of High-Pressure Hydrogen from First Principles

Hydrogen has a unique place in the field of planetary science and high-pressure physics.1 It is the most abundant element in the universe, comprising many astronomical objects such as Jupiter and Saturn in our own solar system and a large number of other objects discovered in the past decade. An accurate understanding of its phase diagram at high pressures and temperatures (Figure 1) is critical for the proper understating of Jovian planets’ interior structure, evolution, and formation. In addition, the experimental observation of metallic hydrogen has become one of the greatest challenges in the high-pressure community. Over the last years, several groups have reported the observation of metallic hydrogen in both solid and liquid phases.2,3 Unfortunately, all predictions are highly controversial, and in the case of the liquid, both reported experiments strongly disagree on the location of the transition (by over 200 GPa). Advanced first-principles methods are needed to help resolve the experimental controversies and move the field towards a definite understanding of the metallization and dissociation processes in dense hydrogen. 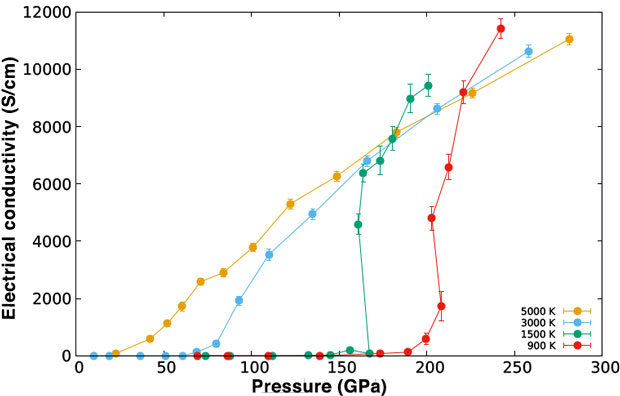 For the last two decades, theoretical efforts have centered on the use of density functional theory, mostly within the Purdue–Burke–Ernzerhof approximation for the exchange-correlation energy, to study the relative stability and phase boundaries in the solid. Density functional theory is a computational quantum-mechanical modeling method used in physics, chemistry, and materials science to investigate the electronic structure of many-body systems—in particular, atoms, molecules, and their condensed phases. As we have recently shown, it is unlikely that density functional theory, particularly with the Purdue–Burke–Ernzerhof approximation, has sufficient accuracy to correctly resolve the current questions about the phase diagram of hydrogen, particularly if using energetics to identify equilibrium phases. In addition, nuclear quantum effects have shown to be critical in the proper description of hydrogen at these conditions, so any calculation that hopes to be predictive needs to account for these effects directly and accurately. Fortunately, accurate quantum Monte Carlo calculations have been used to benchmark a large number of typical approximations to the exchange-correlation energy in density functional theory.4 This work lead to the identification of the best-suited functionals to use in the study of high-pressure hydrogen, both from the point of view of accurate relative energies and accurate structural and vibrational properties.

The calculations for this project were based on a combination of quantum Monte Carlo methods and density functional theory, using optimal exchange-correlation functionals for hydrogen. We performed coupled electron–ion Monte Carlo calculations and ab initio path-integral molecular dynamics calculations to study the equilibrium properties of liquid hydrogen at pressures and temperatures near the metallization and dissociation regime in the liquid. The resulting trajectories were analyzed to calculate optical and vibrational properties. We used a combination of hybrid density functional theory calculations and perturbative calculations based on the GW approximation method to obtain optical properties—Green's function G and screened interaction W is a method that reduces the gap between experimental observations and theoretical predictions of the properties of atoms and molecules used to calculate the self-energy of a many-body system of electrons. 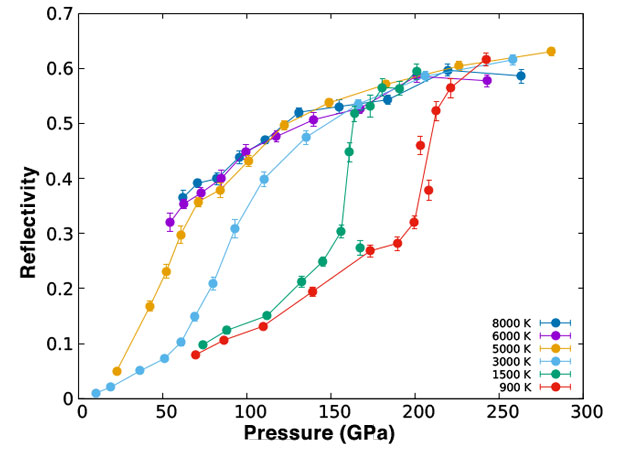 Figure 2. Reflectivity of high-pressure hydrogen as a function of pressure for various temperatures (in Kelvin).

Figure 3. Electrical conductivity of high-pressure hydrogen as a function of pressure for various temperatures (in Kelvin).

Understanding and correctly modeling hydrogen at high pressure is critical to advancing several Livermore missions and core competencies, including stockpile stewardship, high-pressure physics, and developing new materials through advanced manufacturing. Developing and applying novel methods to the study of materials at extreme conditions, through the calculation of structural, optical, and vibrational properties of dense materials strengthens Livermore’s core competency in high-energy-density science and technology.

This project enabled the study of the optical and vibrational properties of hydrogen at extreme conditions using advanced first-principles methods. The results of this work will help resolve an important controversy in the field of high-pressure physics regarding the nature of the metallization and dissociation transition on liquid hydrogen, as well as conflicting experimental observations of the location and character of the transition. Our research results will be an important step leading to identification of the structure of hydrogen's solid phases, because infrared and Raman spectral data sets are the only experimental signatures measured in high-pressure experiments with hydrogen, and any successful identification of equilibrium phases and phase transitions from a theoretical calculation needs to successfully reproduce the vibrational signatures of the transition across the phase diagram.