We are studying the electrodeposition of metal alloys from ionic liquids (a salt in the liquid state) to enable a wider range of compositions and a greater control over film morphology. This may enable new alloy thin-film deposition for catalysis or corrosion- and wear-resistant coatings, and help develop deposition for light metals and alloys for high-energy-density experiments.

Industrially relevant use of metals typically involves alloys, which are solid mixtures of two or more metals, or of metals and non-metals, with these mixtures having superior physical and chemical properties compared to the constituent metals. Alloys are typically formed by melting a mix of metals and then casting them into shape, forming a solid alloy followed by machining to shape, or by sintering powders compacted in a die (powder metallurgy methods). Thin layers of alloys (films), desirable for their superior wear- or corrosion-resistance or catalytic properties, are typically difficult to produce. Two major means of producing thin alloy films are physical vapor deposition and electrodeposition, and both of these currently face severe limitations regarding the compositions and morphologies of alloy films that can be produced. Here, we are studying the electrodeposition of metal alloys from ionic liquids to enable a wider range of compositions and a greater control over film morphology. An ionic liquid is a salt in which the ions are poorly coordinated, which results in these solvents being liquid below 100°C, or even at room temperature. Unique advantages of ionic liquids include a wide potential window, high solubility of metal salts, and no hydrogen impurities. These properties enable the deposition of metals that cannot be plated in aqueous electrolytes. Specifically, ionic liquids enable the electrodeposition of water-sensitive materials (such as aluminum and beryllium) as well as higher-atomic-number metals (such as gold and copper). We will demonstrate controlled co-deposition of metal elements to create continuous gradient-density alloys. Surface qualities such as homogeneity, thickness uniformity, and surface roughness of electrodeposition materials will be improved through the use of ionic liquids. Our research could enable low-density and gradient-concentration metal shells adhering to strict Inertial Confinement Fusion requirements that are beyond current laser target-fabrication capabilities.

We expect to perform a fundamental study of deposition behavior of metals from ionic liquids that is currently lacking. The results of this study will show the impact of the composition of ionic liquids on the deposition process and give predictive capability for electrodeposition of binary alloys. This will enable new possibilities of alloy thin-film deposition that will be of relevance for corrosion- or wear-resistant coatings, or for catalysis. The study of deposition of metals from ionic liquids will also help develop deposition conditions for light metals and alloys with density gradients for high-energy-density experiments. We will select an ionic liquid based on its suitability as a metal solvent. Other selection criteria include viscosity, stability in air and water, and potential window and thermal stability. Our first task will include modeling of metal salt candidates, electrochemical cell fabrication, and detailed experimental design. Then we will study the bulk and surface quality of the electrodeposition metal films as a function of deposition conditions. We intend to co-deposit elements to create metal alloys and to control the metal composition through the use of parameters such as over-potential and temperature. We expect to extend these gradient composition results to the development of thick films. Deposition experiments of target metals of gold, copper, and aluminum from six different ionic liquids onto flats will be performed to determine the impact of the ionic liquids' ion composition on deposition rate and over-potential, and from these measurements extrapolate behavior to choose the optimal ionic liquid for this deposition. Once one is selected, we will perform deposition of binary systems to verify expected compositions for specific conditions, and then attempt to create density gradients in thin films by continuously varying deposition conditions. A final step will be to attempt a deposition on a spherical substrate.

The project is of relevance for the Laboratory core competencies in both advanced materials and manufacturing as well as high-energy-density science. For high-energy-density experiments, we will develop a new capability to create density gradient materials for double-shell-type laser targets, for which currently no good capabilities exist. For advanced materials and manufacturing, we will expand the range of materials that can be used to modify printed structures for their use in energy storage and catalysis, which is also relevant to the DOE goal in science and energy to support a more economically competitive, environmentally responsible, secure, and resilient U.S. energy infrastructure.

In FY17 we (1) began developing techniques for handling room-temperature ionic liquids in air—initial efforts focused on drying and handling of the liquids in air to allow the addition of moisture-sensitive metal salts; (2) initiated experiments on electrodeposition of metals from room-temperature ionic liquids (see figure), with some initially promising results showing differences in metal deposit morphology using different liquids; (3) compared these results to theoretical results using the COSMO-RS model (Conductor-Like Screening Model for Realistic Solvents); and (4) developed a new reference electrode for use in room-temperature ionic liquids experiments, which allows for useful comparisons to be made between different liquids for metal deposition, and will make a meaningful contribution to this new field of electrochemical research. 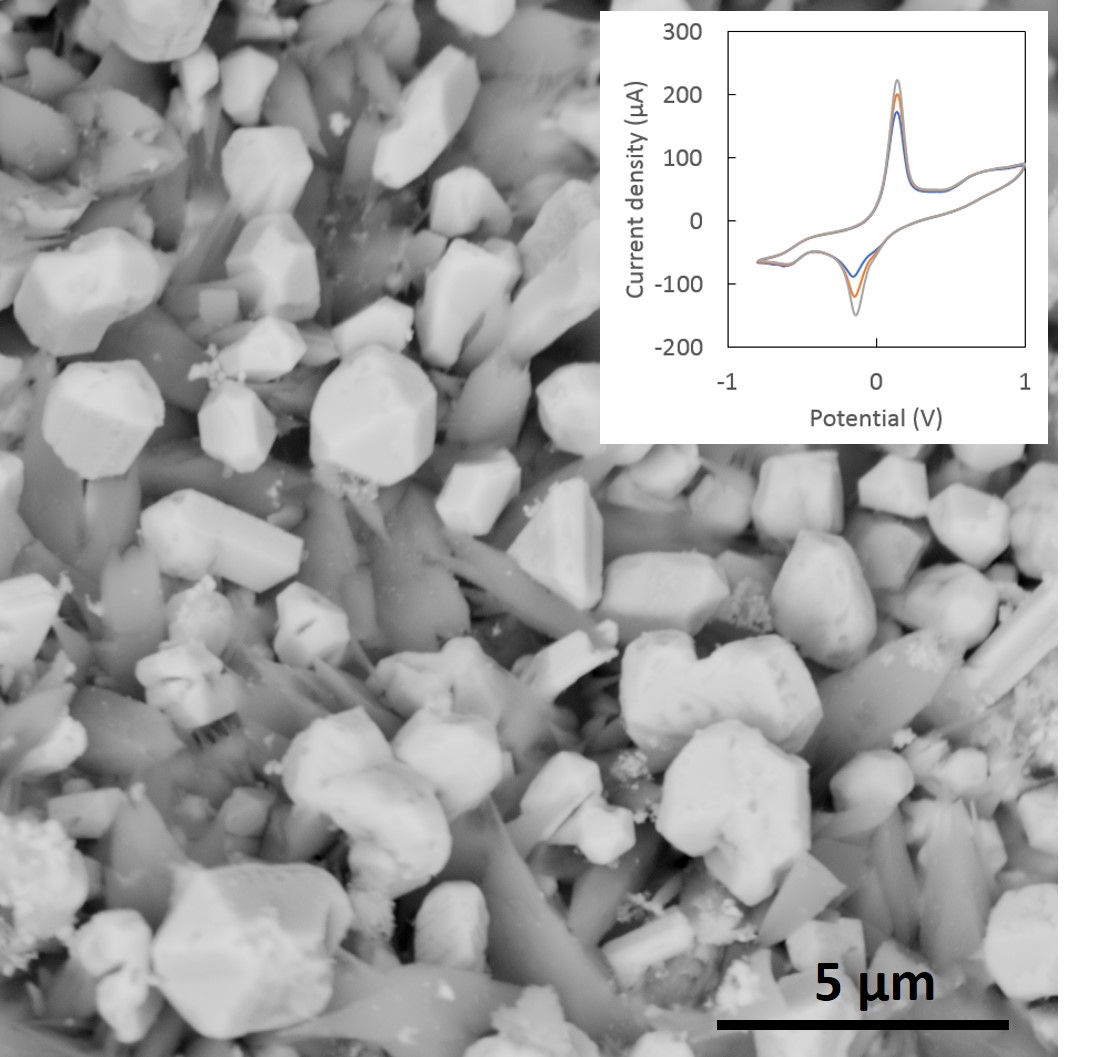 This scanning electron micrograph of silver microcrystals deposited from a room-temperature ionic liquid (1-ethyl-3-methylimidazolium trifluoromethanesulfonate) demonstrates to first order that the process can be performed. The inset shows a cyclic voltammogram trace (an electrochemical measurement used to study the properties of an analyte in solution) during deposition, illustrating that silver reduction and oxidation peaks increase in size with cycling under different conditions than depositions in water.