Within the field of high-explosives (HE) science, the need to better understand HE chemistry drives research into interactions involving isotope substitution and other species of interest (e.g. tritium or uranium). This feasibility study was designed to investigate the potential of using laser ablation and optical emission spectroscopy to understand the high-temperature chemistry of an HE analogue with deuterium gas and, separately, with depleted uranium. The combination of laser ablation with optical emission spectroscopy is ideally suited for studying these interactions for two reasons: (1) emission spectra are highly sensitive to isotope substitution, making it easy to distinguish between chemical reactions involving 1 H or 2 H (deuterium), and (2) laser ablation emission spectroscopy is a rapid and cost-effective platform for studying the chemistry of HE.

In order to accurately interpret the early chemistry of high-explosive detonations, scientists require an improved understanding of the chemistry between dissociated HE products and relevant species, such as tritium or uranium. One current topic of interest is in developing validated models of HE chemistry to understand how detonation products form. While tests using actual HE detonations provide model validation and valuable insight into these chemical processes, HE tests can often be technically challenging and expensive to execute. Laser ablation emission spectroscopy (see schematic below) provides a simple and cost-effective means by which to understand high-temperature chemistry and develop emission signatures relevant to actual HE detonations. 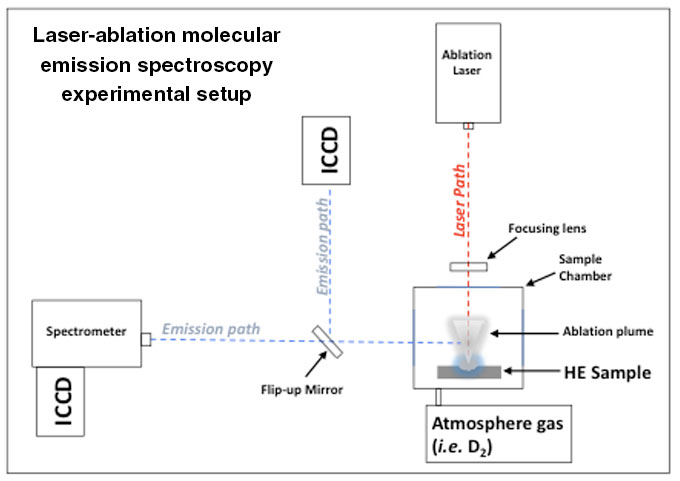 Simple schematic of the laser ablation molecular emission spectroscopy setup illustrating the ablation laser path as well as the emission path. The emission path can either be directed to a combination spectrometer and intensified charge coupled device (ICCD) for spectroscopy or simply imaged on the ICCD (not utilized for this study).

Laser ablation produces an initial plasma in excess of 10,000 K (~1 eV) (De Giacomo and Hermann 2017). In the condensing plasma, ions, atoms, and molecular species are initially in an excited state. The molecular species subsequently undergo rovibronic (rotational-vibrational-electronic) de-excitation. One can easily measure light from this de-excitation process using a dispersive grating and a detector to acquire characteristic spectra of these species (Bol'shakov et al. 2016, De Giacomo and Hermann 2017). Molecular emission spectroscopy has been shown to be effective for studying chemistry subsequent to the laser ablation of chemical compounds or pure elements reacting with surrounding materials(Harilal et al. 2016, Weisz et al. 2018, Serrano et al. 2015). It is also beginning to be applied to the chemistry of HE detonations (Glumac, N. 2005, 2017, Gottfried 2017, Kalam et al. 2017).

In order to understand the fundamental effects of low and high atomic number species (e.g. H and depleted U) on HE chemistry and relevant spectral interpretations, we proposed and accomplished the following research objectives:

Objective 1: To develop a signature of isotopic substitution with 2 H with HE-derived species (or a relevant surrogate) using laser ablation and emission spectroscopy in a deuterium-rich environment.

This study expands the field of HE science and supports the NNSA mission in stockpile stewardship.