Our research focuses on designing, fabricating, launching, and operating a small spacecraft with diagnostics for measuring concentrations of methane and carbon dioxide in the Earth's atmosphere to project how climate change affects stratospheric ozone. This research supports the DOE goal of delivering scientific tools to transform our understanding of nature.

Measurements of methane, carbon dioxide, and water from the upper troposphere to the middle stratosphere provide critical information on stratospheric circulation and how it responds to increasing greenhouse gas concentrations. The circulation affects stratospheric temperature by controlling the distribution of these important radiative gases, but also affects photochemistry through its impact on the distribution of gases that control oxygen loss processes. Measuring stratospheric circulation and its variability is essential for projecting how climate change will affect stratospheric ozone. To understand how best to perform space-based observation of methane and carbon dioxide in the atmosphere, we plan to design, fabricate, launch, and operate a small spacecraft with miniaturized diagnostics for measuring the concentration of gases. The passive measurements, using sunlight as the light source, allow us to determine how this low-cost (<$1M per satellite) and rapidly designed technique can provide high-cadence data for atmospheric research. Conducting measurements from space at low cost allows deployment of a network of sensors for extended coverage of the Earth’s atmosphere. We are collaborating with the National Aeronautics and Space Administration's Goddard Space Flight Center, which will create the instrument payload. We are leading satellite development, mission planning, and testing efforts. The project includes eight months of on-orbit data collection and analysis by both institutions.

We expect to develop and implement techniques and instruments required to enable a small satellite to collect data on stratospheric circulation and perform broader atmospheric measurements generally thought to require large, lengthy, and high-cost space assets. We are developing a 6U CubeSat (30 × 20 × 10 cm) miniaturized spacecraft and providing alternate methods for communicating with CubeSats without the need of a dedicated ground station. Our three major objectives are (1) developing key small-satellite technologies for scientific missions and national security by supporting fabrication of the satellite payload and spacecraft at the Goddard Space Flight Center; (2) developing miniaturization of atmospheric measurement instrumentation, the laser heterodyne radiometer (which detects gases in the atmosphere by concentrating sunlight at various altitudes near the target atmospheric-gas absorption wavelength into a single-mode fiber, and mixing it with an internal narrow-line laser to estimate gas concentration), and integration into a small-satellite platform during fabrication, integration, and testing; and (3) developing a small-satellite mission plan for collecting atmospheric data in low Earth orbit and demonstrating and refining collection of actual on-board data. Successfully collecting such on-orbit data would enable use of constellations of inexpensive small satellites for operational systems.

Our project supports the DOE science and energy objective of delivering scientific discoveries and tools that transform our understanding of nature. Research into the design, optimization, and operation of a CubeSat spacecraft leverages Livermore Laboratory's expertise in miniaturized-satellite bus development and expands expertise to larger satellites, supporting the cyber security, space, and intelligence mission focus area and the earth and atmospheric science core competency.

In FY17 we and our collaborators (1) fabricated the major bus sub-systems for command and data handling, attitude (orientation) control, deployment, global positioning system, and power; (2) put in place and demonstrated a ground system; (3) purchased cells for the solar panels; (4) completed a prototype payload and are fabricating the final flight unit (see figure); and (5) began mission planning using a project-developed shared tool. 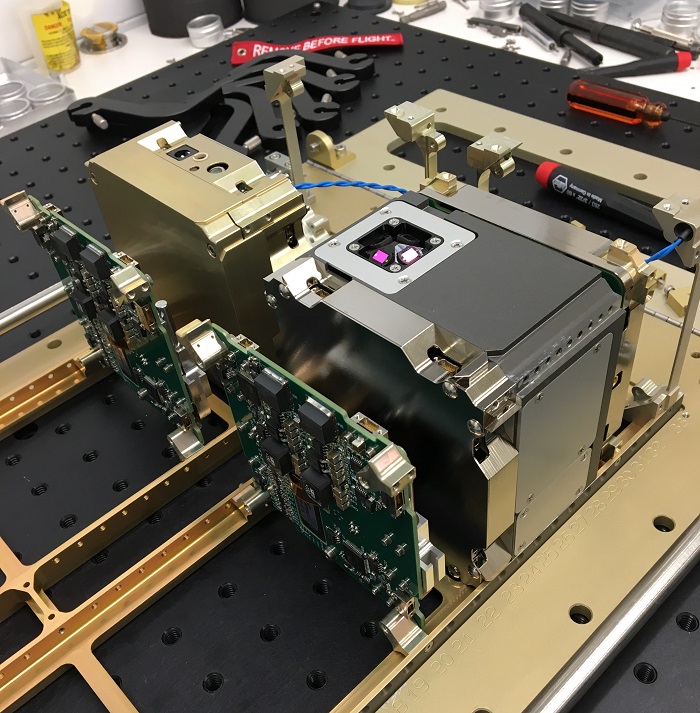 Flight hardware in its assembly fixture during a fit check for a small satellite (20 × 10 × 30 cm) for the Measuring Atmospheric Gas Using Small Satellites (MiniCarb) project.