Melting and freezing cause tremendous and fundamental changes in a material's response to external forces. For multicomponent materials, the dynamic process of crossing the melting transition can drive rapid chemical separation between solid and liquid phases, leading to undesirable hydrodynamic behavior. From a fundamental science perspective, the melting transition in planetary materials is extremely important because it plays a major role in determining whether an extrasolar planet could be habitable. Our objective is to improve our knowledge of the melting transition in planetary materials at extreme pressures and temperatures. We will also determine the effect of kinetics on our measurements by performing experiments on two platforms that sample widely disparate timescales: the laser shock platform at University of Rochester's OMEGA laser facility in New York and the gas gun platform at the Argonne National Laboratory in Illinois.

By the end of this project we expect to be able to determine if an extrasolar planet with a mass between one and ten Earth masses (a "super-Earth") could have a liquid metal core and if it will solidify from the center. Both of these criteria are requirements for generating a stable megneto-dynamo, a proposed requirement for habitability that protects life from severe radiation from the Sun and shields the atmosphere against erosion by the solar wind, as is the case for Earth. We also expect to have a significantly improved understanding of how the mantle of rocky extrasolar planets will solidify, which we will use to predict if plate tectonics are possible on super-Earths. Results from our research into the kinetics of melting and solidification would also have direct applications to equation of state and strength modeling of multicomponent materials. Many applications require an in-depth understanding of alloys and compounds at extreme pressures and temperatures, and the decades-old tools developed at LLNL to deal with single-component materials are not applicable when dealing with complex multicomponent materials. While the materials differ in the planetary science arena, the physics remains the same. Thus, results of this research can also be applied to efforts to increase the fidelity of weapons physics models and to increase the understanding of how advanced manufacturing materials melt and solidify.

Our proposed project into the time-dependent nature of melting and freezing in complex multicomponent materials is relevant to the Laboratory's high-energy-density science core competency and the stockpile stewardship science strategic focus area. The research contributes to four themes in LLNL's investment strategy: (1) increasing the fidelity of weapons physics models, (2) providing a basic understanding of how advanced manufacturing materials melt and solidify, (3) contributing to the development of experimental platforms for future weapons and complex integration experiments, and (4) providing a fundamental understanding of extreme, high-energy-density states of matter.

In FY15 we (1) began applying the one-dimensional radiation-hydrodynamics code HYADES to the design of laser shock-melting experiments at OMEGA; (2) sourced, purchased, and prepared major target materials for the project, (3) obtained preliminary data from the sound-speed measurements on magnesium silicate, which suggests that there is no liquid–liquid phase transition, with important implications for our understanding of magma oceans; and (4) obtained preliminary data from compressed iron alloys, which suggests that solid-state decomposition is not fast enough on the laser timescales. 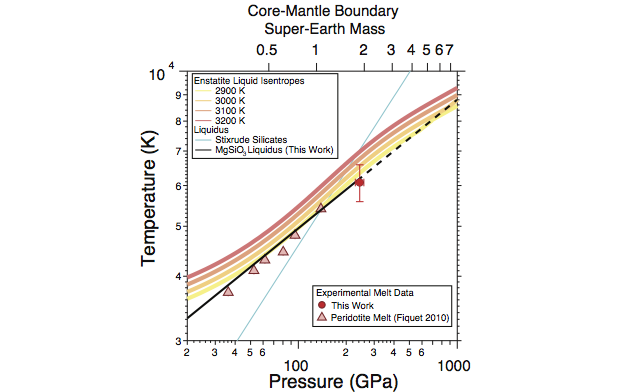 The pressure–temperature phase diagram of enstatite, a mineral similar to the bulk composition of silicate Earth (the primitive mantle). The top axis shows the pressure at the core mantle boundary of a super-Earth of given mass. The dashed line shows the melting curve prediction of Stixrude et al. (2014), and the solid black line shows a fit to previous melting-curve measurements and our recent high-pressure measurement of the melting curve (solid red square). Also shown are magma ocean isentropes of different potential temperatures. One can see that the isentropes will not intersect the mantle melt curve at 1 to 2 Mbar, but are nearly parallel to the mantle curve for a wide range of super-Earth masses. This suggests that it may be possible for a large super-Earth to have an entire mantle magma ocean, conducting heat rapidly away from the core and enabling efficient chemical mixing throughout the mantle.