Everything we know about the inside of Earth is derived from remote surface measurements in combination with modeling and experiments. Because of the high temperatures of the Earth's mantle, we have no way of drilling deeper than Earth's crust. We propose to determine the relationship of hydrogen diffusion and conduction in upper-mantle minerals as a tool for inferring hydrogen distribution in the mantle. The project is motivated by the critical need for this information to accurately interpret the geophysical data on Earth's mantle. Evidence of a deep-Earth water cycle would provide new insight on planetary formation as well as the origin of Earth's oceans. We plan to perform a series of deuterium–hydrogen experiments on mantle minerals at a wide range of pressure and temperature conditions. Samples will be analyzed by nanometer-scale secondary-ion mass spectrometry to determine diffusion coefficients, and electrical conductivity will be modeled for comparison to geophysical measurements, allowing hydrogen contents to be inferred regionally inside of the Earth.

Project success will result in a comprehensive model of electrical conductivity for the Earth's upper mantle, based on hydrogen diffusion measurements in the primary components of the mantle—olivine and pyroxene—over a wide range of relevant pressure and temperature conditions. This model will enable hydrogen contents to be inferred regionally throughout the upper mantle from the broad array of electrical conductivity field measurements on Earth that have been published. A distribution of hydrogen in the mantle will indicate whether or not a hydrogen-rich reservoir, thought to exist at depths between 410 to 660 km, is linked to Earth's oceans by mantle convection processes. A deep-water cycle throughout Earth's history could explain why it has retained large bodies of water on its surface, unlike other nearby planetary bodies. In addition to relevance to materials science, this research is expected to benefit understanding of our climate system, which depends on characterizing the flow of energy, water, and chemicals between the mantle, hydrosphere, and atmosphere.

This work will extend our understanding of hydrogen diffusion and behavior of mantle materials and will contribute to the knowledge base of materials science, especially under conditions of high pressure and temperature. This effort is relevant to the Laboratory's core competency in high-energy-density science, in which focused laboratory and computational experiments are recreating and characterizing conditions deep inside planets. In addition, our efforts may provide information on our climate, which is a delicate balance of complex systems, below, on, and above the Earth's surface.

In FY15 we (1) cut and oriented olivine samples (the primary constituent of the upper mantle) with the assistance of our collaborators at Arizona State University; (2) performed the dry anneal portion of our experiments, and have designed and fabricated assemblies for 2-GPa experiments using a piston cylinder press; (3) examined samples from previous work, and will soon re-examine hydrogen distributions in these samples using nanometer-scale secondary-ion mass spectrometry to obtain complete hydrogen diffusion as a function of orientation; and (4) hired a postdoctoral researcher who is an expert in multiple-anvil experiments and hydrogen analyses. 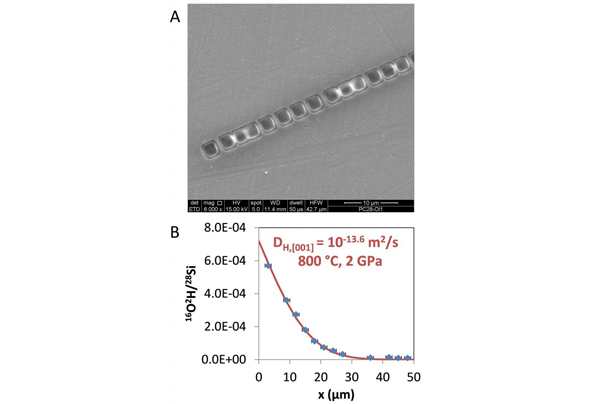 (A) An olivine mineral sample with experimental exchange of deuterium with hydrogen. The sample was analyzed by nanoSIMS, a high-spatial-resolution technique where a linear array of 2-μm square craters are rastered into the surface of the sample, and secondary ions are separated by their charge-to-mass ratio. (B) NanoSIMS data show the concentrations of deuterium diffusing across these relatively short distances into the crystal. This profile is fit to determine a hydrogen self-diffusion coefficient. The information is critical for accurately calculating electrical conductivity in hydrous olivine and to improve our understanding of geophysical measurements on Earth’s mantle.