Our project's goal is to investigate cutting-edge numerical methods for simulation of a laser directed-energy weapon's impact on a target for a full range of timescales. This research will advance the general field of computational modeling in fluid and structure interactions, as well as defense applications, with the use of state-of-the-art algorithms for high-performance computing and fully coupled physics.

A directed-energy weapon emits highly focused energy, transferring that energy to a target to damage or destroy it. Potential applications include anti-personnel weapon systems, missile defense systems, and the disabling of lightly armored vehicles such as cars, drones, watercraft, and electronic devices. A predictive simulation capability is critical to exploring and evaluating new methods of laser directed-energy lethality and vulnerability. Previous simulations showing material failure caused by laser damage with airflow were performed using explicit mechanics capability only. However, this method is prohibitively expensive for problems with timescales of seconds. We are performing the research and development of a robust and predictive capability for the simulation of target engagement and response to a laser directed-energy encounter. For this project, we are focusing on subsonic laminar flows, without formation of strong shocks near the regions of interest. Our goal is to capture long-timescale simulations (seconds to minutes of laser directed energy to target engagement times). We are developing an accurate, robust, and fully-coupled implicit solid mechanics (hydrodynamics with strength) and implicit fluid dynamics approach that can be used in exploring local damage behavior with full system response. This research will impact the general field of computational modeling in fluid and structure interactions, as well as defense applications, with the use of state-of-the-art algorithms for high-performance computing and fully coupled physics.

Exploring methods of laser directed-energy lethality and vulnerability requires efficient and accurate numerical methods. We are developing an end-to-end simulation capability for exploring and evaluating the effectiveness of laser directed energy. We are investigating cutting-edge numerical methods for the full range of timescales for simulating target engagement and response. Our project goal is to fill the gap in capability for long-timescale simulations by producing a coupled multi-physics simulation capability for fluid and structure interaction with adequate computational efficiency for the range of application timescales. These timescales for target engagement and response range from seconds to minutes. The current explicit hydrodynamics simulation capability with aerodynamics for laser directed-energy damage modeling requires on the order of months of computer central processing unit time to capture a second of local material behavior. For practical simulations, it is necessary to develop a fully coupled implicit solid mechanics (hydrodynamics with strength) and implicit fluid dynamics approach for the full-system response, as well as local damage behavior. Because we are planning novel methods that efficiently capture both fast and slow energy deposition and system response time, our effort could have an impact on the general field of computational modeling in fluid–structure interactions, as well as for defense applications. Our technical approach involves multi-physics coupling of the solid mechanics and structural response of a target to the aerodynamics flight loading. Specifically, we are investigating and developing the interface methodology for tight coupling of an implicit solid hydrodynamics model and a high-order, all-speed computational fluid dynamics model. The flow model uses the reconstructed discontinuous Galerkin method in Livermore’s ALE3D code (arbitrary Lagrangian–Eulerian techniques in two and three dimensions). In addition, we are evaluating shock-capturing capabilities within the current ALE3D’s implicit all-speed reconstructed discontinuous Galerkin approach, which will allow us to focus on exploring coupling between fluid and solid mechanics packages.

Our computational effort for simulation of laser directed energy supports the Laboratory’s national security mission area and the core competency of high-performance computing, simulation, and data science. In addition to laser directed-energy applications, which support the mission research challenge area of directed energy, there are a range of other national security applications that can benefit from the fluid–structure modeling at extreme conditions, as well as the continued efforts with ALE3D in advanced manufacturing. This research also furthers the DOE goal to strengthen key science, technology, and engineering capabilities and modernize the national security infrastructure.

In FY17 we (1) began replacing the current materials visualization package with PETSc (Portable, Extensible Toolkit for Scientific Computing) in thermo-structural mechanics packages of ALE3D, which will enable incorporation of these packages of ALE3D into the SNES (Scalable Nonlinear Equations Solvers) nonlinear solver, for tight coupling with an n-fluid dynamics package; (2) began work on preconditioning of a fully implicit n-fluid dynamics solver; (3) provided an initial layout for extending this scalable preconditioning technique, originally developed for three-by-three systems in fluid dynamics, to an n-by-n system using a nested Schur complement (a key tool in numerical analyses, statistics, and matrix analysis), which is necessary for the proposed multi-physics coupling; and (4) began implementing mesh motion in reconstructed discontinuous Galerkin solvers of ALE3D. 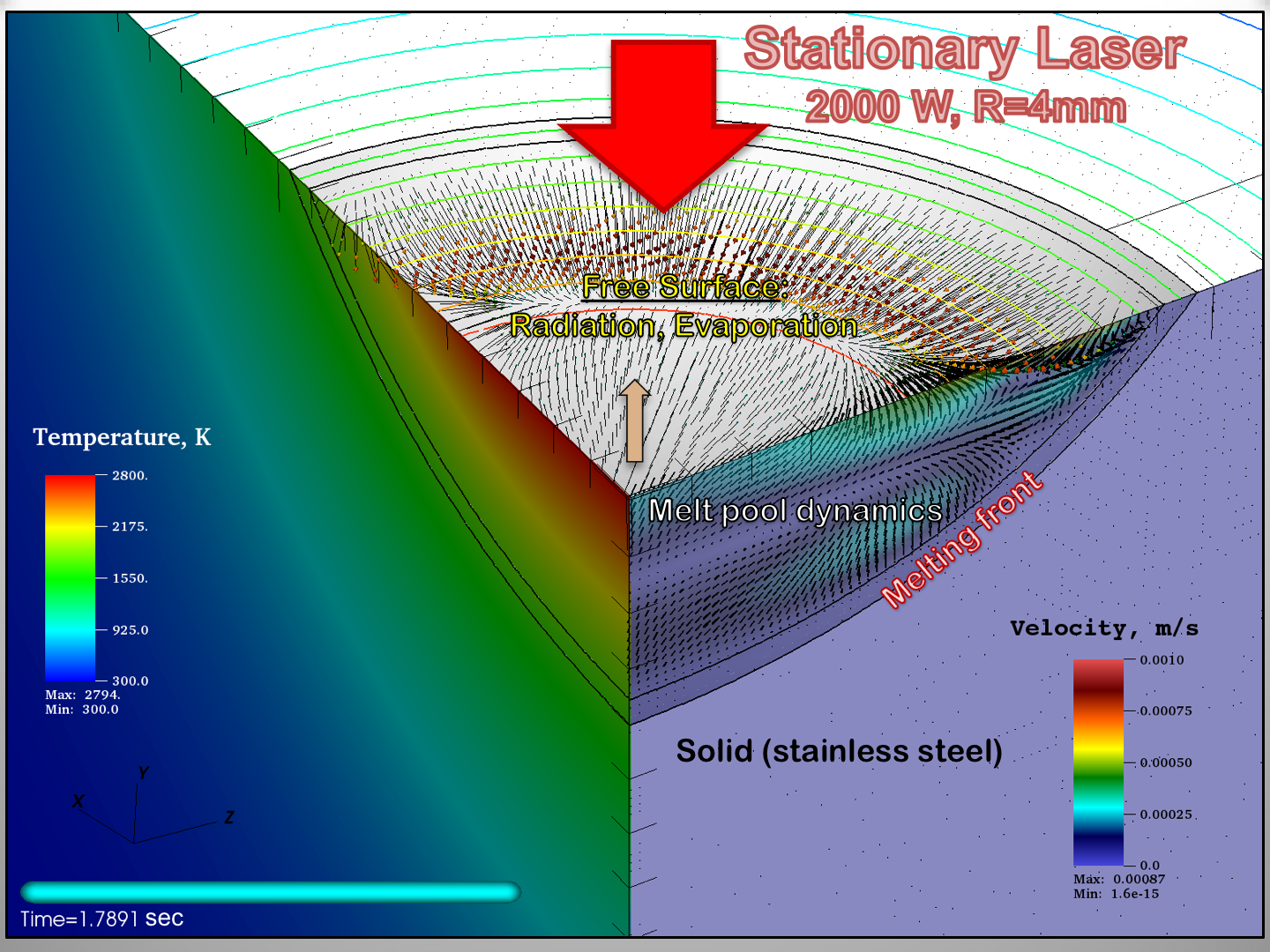 A scalable, fully-implicit simulation of a long-time transient for direct energy deposition on a stainless steel plate using tightly-coupled, non-linear physics thermo-fluid dynamics with phase change and a Newton-Krylov-based solver with an iterative preconditioner and high-order, discontinuous Galerkin discretization with 20 million degrees of freedom.

Weston, B., R. Nourgaliev, A. Anderson, 2017. "Preconditioning of A High-Order, Fully-Implicit Compressible Flow Solver for Large-Scale Simulations of Multi-Physics Processes in Additive Manufacturing." International Conference on Coupled Problems in Science and Engineering. LLNL-ABS-707298.