Wetlands as a Source of Atmospheric Methane: A Multiscale and Multidisciplinary Approach

Understanding the interacting processes that govern net emissions of methane (a powerful greenhouse gas) from wetlands is critical for predicting biospheric feedbacks to climate change. We will investigate the response of these processes to warming and to elevated levels of carbon dioxide at the DOE Office of Biological and Environmental Research's Spruce and Peatland Responses Under Climatic and Environmental Change (SPRUCE) project site (shown in figure) and, based on our results, assess how the processes interact to drive changes in net emissions. Specifically, we will (1) link underground processes to atmospheric fluxes using observations of carbon-13 and hydrogen-2 (measured with isotope-ratio mass spectrometry) and carbon-14 (measured with accelerator mass spectrometry), (2) identify key microbial species influencing methane production and consumption using stable isotope probing with nanometer-scale secondary-ion mass spectroscopy, (3) constrain ebullition phase transition rates with measurements of noble gases in pore water using membrane-inlet mass spectrometry, and (4) integrate our findings into a box model that describes wetland response to global warming and elevated levels of carbon dioxide.

We expect to provide the first comprehensive study of the link among the methane-producing microorganisms methanogens and methane-consuming methanotrophs, the in situ production and consumption of methane, attributed carbon sources, and net emissions. Our results will be integrated to identify how individual processes respond to experimental treatments and how this response scales from the microscale to the ecosystem, enabling testing of current working hypotheses for divergent responses of wetland emissions to future change. Our deliverables include the quantitative, process-level information required to evaluate the physiochemical parameters of methane and carbon dioxide fluxes from wetlands and to integrate microbial community function into these descriptors for improved prediction. Finally, our project will demonstrate the use in carbon cycle science of new capabilities—carbon-14 and hydrogen-2 measurements, nanometer-scale secondary-ion mass spectroscopy, and membrane-inlet mass spectrometry for detection of noble gases.

This project supports the Laboratory's mission in energy security by advancing capabilities in predicting and understanding climate change. It also directly supports the Laboratory's core competency in nuclear, chemical, and isotopic signatures by promoting the continued development and early application of specialized techniques in accelerator mass spectrometry and isotope-ratio mass spectrometry.

In FY15 we (1) completed air extraction and chemical analyses for all samples collected in FY14 for the pre-warming and deep-peat warming experiments; (2) used these results to finalize plans for the whole-system warming experiment, which included field campaigns in April and monthly collections for June through September for carbon-13-labeled chip-based stable-isotope probing, pore-water noble gases, surface carbon-14 flux, and canopy carbon dioxide and methane isotopes to test whole-ecosystem warming; (3) completed spring and early-summer air extractions and analyses, and began late-summer extractions and analyses; and (4) began development of the methanogen probing chip using a stable isotope labeled with carbon-13. 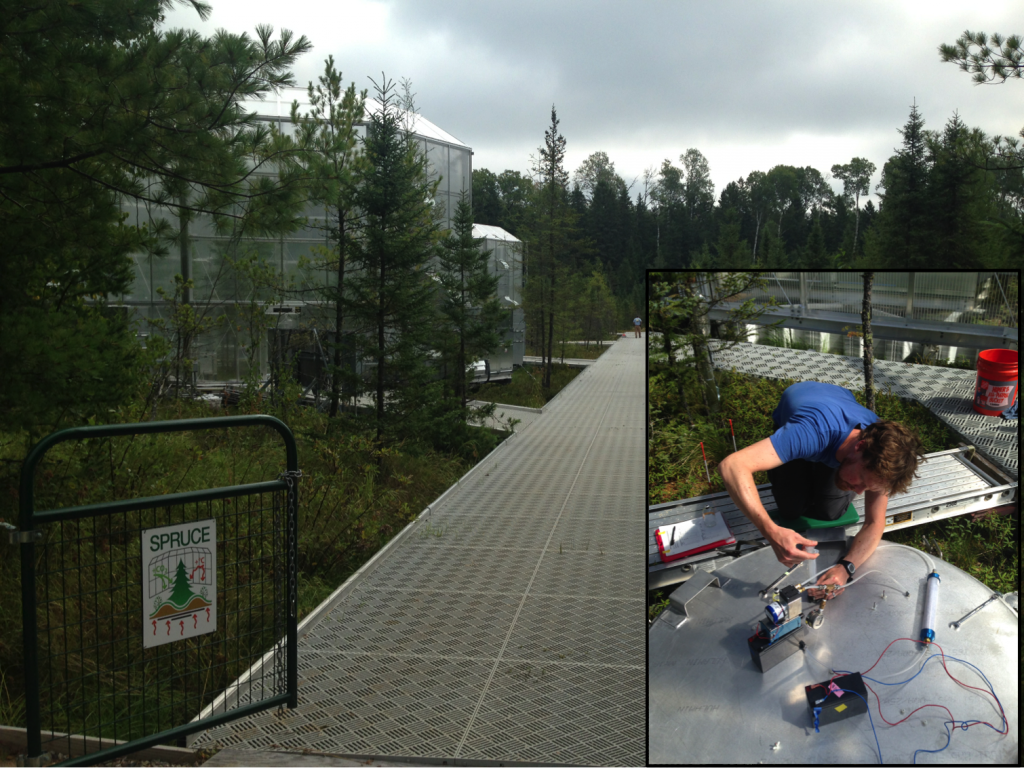 The SPRUCE site, a spruce bog in northern Minnesota where experimental chambers (left) are being used to simulate a warmer future climate. Air emitted from the bog surface is collected for isotopic analysis of carbon dioxide and methane (inset). These measurements tell us that the carbon being emitted from the bog surface under our current climate was recently taken up from the atmosphere by vegetation and is cycling through the bog rapidly, not from decomposition of old peat that has been stored in the bog over thousands of years.