The nation faces more and more problems that are global in scale, especially in the field of national security, yet lacks the capability of simulating those problems at worldwide scale to help develop the best possible countermeasures. We intend to develop global-scale models to predict outcomes, evaluate courses of action, and develop new analysis techniques for addressing global problems. To demonstrate the capabilities of our global modeling approach, we will develop applications based on discrete-event simulation, which models the operation of a system as a discrete sequence of events in time, with each event occurring at a particular instant and marking a change of state in the system. For this project, we will model a distributed denial-of-service cyber attack as well as a pandemic model that simulates the spread of an evolving virus. We will tackle three fundamental research challenges in discrete-event simulation: (1) the automatic reverse engineering of source code; (2) dynamic load balancing, a technique that distributes processing equally among processors throughout the job's life; and (3) global synchronization using only one-sided communication data.

Using Sequoia-class supercomputers, we expect to develop and implement planetary-scale models such as a real-time model with an agent for every person on earth, executing five events per second per person; a model of the entire Internet, transmitting 10 packets per second per node; or a worldwide pandemic model simulating viral evolution during replication and transmission. We will aim for planetary scale, and in so doing learn a tremendous amount about the underlying technical challenges. 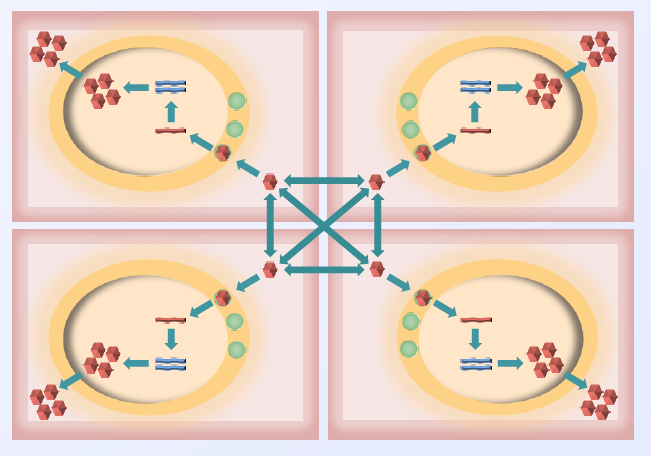 Schematic diagram of our viral evolution model, illustrating the main steps required to simulate the evolution of viral genomic sequences as they are replicated in cells. This model is designed to execute in parallel on many compute processes, and each rectangle shows the components represented in a single compute process. Individual virions (viral copies) exist in the intercellular medium, and their reproduction and mutation is modeled in three steps: virions attach to a cell well, enter the cell, and form replication complexes. The positive-sense viral RNA is copied repeatedly into negative-sense RNA, with mutations (sense is a concept to describe translation polarity of these nucleic acid molecules). Each negative-sense RNA is copied repeatedly into positive-sense RNA with additional mutations, and encapsulated in the capsid protein coat. When the number of virions in the cell exceeds a threshold, the cell bursts and dies, releasing all the produced viral copies back into the intercellular medium.