We investigated the feasibility of using a nonlinear spectroscopy technique to examine the hydrogen isotopic uniformity of the fuel layer in Inertial Confinement Fusion targets. Successful target designs and simulations of ignition demand a good understanding of the fuel layer inside the capsule. During cryogenic layering, isotopic fractionation can lead to inhomogeneity in the fuel layer. It is important to have a technique to characterize the isotopic composition of the fuel layer to better predict ignition outcome. We designed, built, and tested a coherent anti-Stokes Raman spectroscopic system, which is sensitive to vibrational and rotational signatures of chemical species. A femtosecond laser was used to provide both the pump pulse and the red-shifted Stokes pulse through super-continuum generation. A resonance-enhanced coherent anti-Stokes Raman spectroscopic signal was measured from both liquid toluene and hydrogen gas at high pressure (~300 psi) to validate the system.

Theoretical Inertial Confinement Fusion target designs and numerical simulations of ignition often assume a homogenous layer of deuterium–tritium fuel inside the capsule. Any nonuniformity can potentially affect the efficiency of fusion reaction.1 Using optical microscopy and x-ray radiography, a roughness of the solid–vapor interface in the fuel layer upon cooling has been observed.2 There are also indications that during cryogenic layering, isotopic fractionation can take place because of the different triple-point temperatures for deuterium, tritium, and deuterium–tritium, leading to inhomogeneity in the fuel layer rich in deuterium or tritium.3 Because the temperature-dependent thermonuclear reaction rates for deuterium, tritium, and deuterium–tritium are very different, fractionation of the fuel layer can significantly affect the performance of the target. It is therefore important to accurately characterize the isotopic composition of the hydrogen-ice layer inside the target capsule to better simulate and predict ignition outcome.

The quality of the fuel layers, such as isotopic fractionation, varies depending on the layering methods and protocols. After freezing, the fractionation can also evolve over time and go through some degree of “healing” because of molecular diffusion. This diffusion may be enhanced for tritium-containing fuel because of the energy generated from beta decay.2 To advance our understanding of the physics of cryogenic layering and improve layering protocols, we require a diagnostic tool that provides a better characterization of the deuterium–tritium layer inside the capsule. This diagnostic tool needs to provide in situ chemical composition measurements of the ice layer, should allow observation during target filling and layer formation, and needs to have three-dimensional resolution, possibly down to a few microns. Given that the temperature of interest is close to the triple point, this tool should also be compatible with a cryogenic system and produce minimal perturbations, such as heating, to the hydrogen ice.

Spontaneous Raman spectroscopy is a light-scattering technique widely used for the detection of vibrational and rotational signatures of chemical species. It is relatively noninvasive but suffers from its fairly low scattering cross-sections that limit the signal level. As a result, long sampling times are often necessary to overcome signal-to-noise issues, making it difficult to follow dynamic processes. Also, prolonged excitation from a high-average-power laser may lead to heating or modification of the sample.

Coherent anti-Stokes Raman spectroscopy (CARS) is a nonlinear four-wave mixing spectroscopy technique based on the Raman effect. When the frequency difference between the two excitation laser beams (ωp- ωs) is tuned to a Raman-active vibrational or rotational mode (ωv), a resonance enhancement of the anti-Stokes emission (ωas) at 2ωp- ωs is observed (Figure 1). The signal intensity, ICARS, is proportional to both the pump and Stokes intensity (Ip)2(Is) and the effective third-order susceptibility of the sample χ(3).

Figure 1. In coherent anti-Stokes Raman spectroscopy, with an anti-Stokes frequency of ωas, the frequency difference between the two excitation laser beams (ωp- ωs) is tuned to a Raman-active vibrational or rotational mode (ωv).

Because CARS is a multiphoton process and has a nonlinear dependence on excitation field intensity (Ip and Is), a signal is only generated from the laser focus. By using tight focus, one can achieve three-dimensional resolution. Because of the high peak intensity, short pulse lasers in the picosecond range are often used in CARS for better signal. The low average power is also advantageous because it minimizes heating. Furthermore, because the CARS signal is blue-shifted relative to the excitation, it allows easier suppression of background such as fluorescence.

For this project, we designed, constructed, and tested a CARS spectroscopy system and evaluated different experimental CARS configurations. This project established a test platform that provides noninvasive characterization of a sample's chemical composition. This stand-alone test platform can be used to access the feasibility of applying CARS to existing target diagnostic systems to study hydrogen and its isotopic components.

The ideal pump and Stokes excitation beams used in CARS are typically a few picoseconds in pulse duration.4 Because the laser is the most expensive investment of any CARS system and the goal of this project was to demonstrate a proof of principle of the technique, we chose to use an existing 500-kHz femtosecond laser at 1,030 nm with 350-fs pulse duration and up to ~10 μJ per pulse energy. The shorter pulse duration of this system produced a higher peak intensity and therefore a potentially higher CARS signal. The near-infrared wavelength also minimized the two-photon enhancement of χ(3). However, there were a few key drawbacks to using this particular laser. First, the shorter pulse translated to a wider spectral bandwidth, which reduced the spectral resolution of the system. Second, using femtosecond pulses as excitation increased the non-resonant component of CARS signal, which reduced the overall signal to noise.4 Third, the nonlinear four-wave mixing technique requires good spatial and temporal overlap of the pump and Stokes pulses to be efficient. Femtosecond pulses make temporal overlapping very challenging because the path length of each pulse needs to be within 100 mm of each other. Any thermal expansion of the system overtime could significantly impact the overlap.

Our initial design of the system involved splitting the laser output pulses into two. One beam was used as pump ωp­. The second beam went through a photonic crystal fiber to generate a super-continuum and served as the red-shifted Stokes pulse ωs. Both beams were then combined and focused on a sample using a 10x 0.26NA objective. A motorized delay stage was used to adjust the temporal overlap of the two beams. The anti-Stokes signal was collected by an imaging spectrometer (iHR320, Horiba) using a 1,200 gr/mm grating onto a liquid-nitrogen-cooled charge-coupled-device camera (Princeton Instrument). The schematic of the setup is shown in Figure 2. The typical super-continuum spectrum from the photonic crystal fiber (NL-1050-NEG-1) is shown in the inset, with the arrow pointing to the wavelength of the fundamental pump pulse and the circle highlighting the wavelength range of the Stokes pulse (red circle). We did not tune the wavelength of the Stokes pulse to match a specific vibrational mode. Instead, the entire bandwidth of the Stokes pulse was used to excite multiple modes at once and provide simultaneous measurements within the wavelength range.5 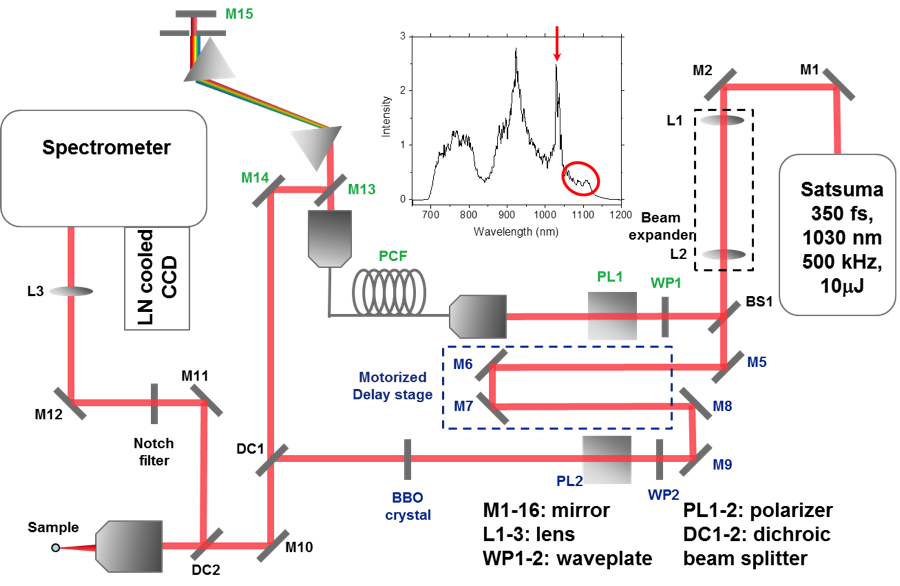 Figure 2. Experimental setup and a typical super-continuum spectrum from the photonic crystal fiber. The arrow and circle are the location of the pump pulse wavelength and the corresponding red-shifted Stokes pulse.

The initial test with toluene yielded a weak and noisy signal—not an ideal result. After carefully analyzing the data, we determined several system limitations. Although a near-infrared laser wavelength at 1,030 nm reduces two-photon contribution to the χ(3), given that it is not a common wavelength there are limited choices of precision optics (such as filters and dichroic mirrors) that are crucial for system efficiency. The intensity of the Stokes pulse from the super-continuum (red shifted relative to the pump) is also very low (see Figure 2 inset). In comparison, the blue side of the photonic crystal fiber output is much stronger. To overcome these limitations, we made modifications to the CARS system, including adding a beta barium borate crystal to the pump arm of the pulse. This addition doubled the frequency of the pulse from 1,030 nm in the near-infrared to 515 nm in the visible, where we had a much larger selection of optical components. We also chose a different photonic crystal fiber (NL-PM-750) to generate the red-shifted Stokes pulse relative to the 515-nm pump pulse.

The red curve in Figure 3 shows the CARS signal from toluene obtained using the modified system. The spontaneous anti-Stokes Raman from using only the pump pulse is shown in black. The sampling time was 1 s for both spectra. The intensity of the broad Stokes’ pulse is plotted in blue. 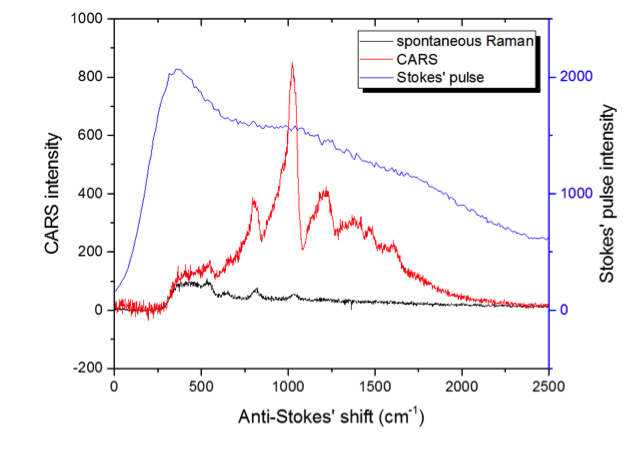 The strong ring modes of toluene at ~790 cm-1; 1,020 cm-1;and the ring-methyl stretching mode at ~1,200 cm-1 are clearly visible. There is an enhancement up to ~15 fold compared to the spontaneous anti-Stokes Raman. The ring mode at ~990 cm-1 is also visible but less resolved, showing the reduced spectral resolution when using femtosecond laser pulses as excitation.

We also tested this CARS system on hydrogen gas at one atmosphere (data not shown) and ~300 psi (Figure 4). With a 10-s sampling time, we did not detect any observable rotational vibration from the hydrogen when looking at samples at 1 atm. At high pressure, the J=1 → J=3 transition is clearly visible in the CARS signal at ~590 cm-1. We also observed a double peak at ~370 cm-1 and ~430 cm-1. We believe the first peak is the J=0 → J=2 transition and the second peak is likely from water in the hydrogen gas. The signal strength of CARS is very sensitive to molecular number density in the sampling volume. With a careful calibration using known mixtures of hydrogen, deuterium, and tritium, we should be able to correlate the signal intensity unique to a particular chemical species to its molecular density (i.e., concentration). 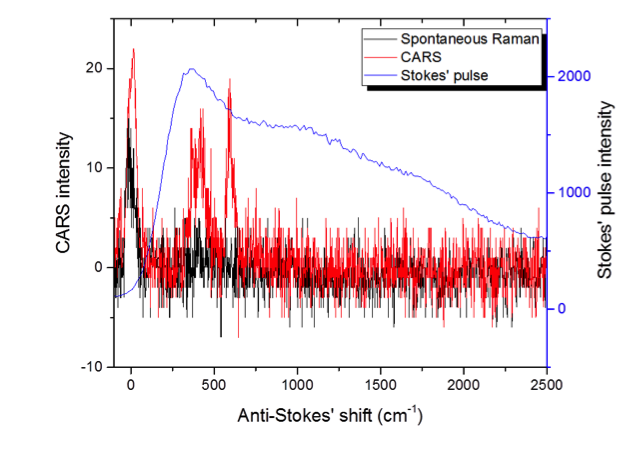 We investigated the feasibility of using a nonlinear spectroscopy to study isotopic uniformity of the hydrogen fuel layer inside an Inertial Confinement Fusion target. A CARS system was designed, built, and tested on liquid toluene, showing good resonance enhancement. We also demonstrated the detection of rotational modes from hydrogen gas with this system. This technique is compatible with the National Ignition Facility's existing cryogenic target diagnostic platform and can be applied to obtain measurements of isotopic composition of the target fuel layer. There is also room to further improve the system by using, for example, a picosecond laser in place of a femtosecond laser. Such a change would increase spectral resolution by reducing the background from the nonresonant contribution.