While deep learning technologies for computer vision have developed rapidly since 2012, modeling of remote sensing systems has remained focused around human vision. In particular, remote sensing systems are usually constructed to optimize the trade-off between cost and sensing quality, with respect to human image interpretability. While some recent studies have explored remote sensing system design as a function of simple computer vision algorithm performance, there has been little work relating this design to the state-of-the-art in computer vision: deep learning with convolutional neural networks. We developed experimental systems to conduct this analysis, showing results with modern deep learning algorithms and recent overhead image data. Our results were compared to standard image quality measurements based on human visual perception, and we concluded not only that machine and human interpretability differ significantly, but that computer vision performance is largely self-consistent across a range of disparate conditions. We present this research as a cornerstone for a new generation of sensor design systems that focus on computer algorithm performance instead of human visual perception.

In the past decade, overhead image data collection rates have expanded to the petabyte scale (Warren et al. 2015, Moody et al. 2016). This imagery is used for a wide variety of applications including disaster relief (Voigt et al. 2007), environmental monitoring (Wulder and Coops 2014), and intelligence, surveillance, and reconnaissance (ISR) (Heinze et al. 2008). Given the scale of this data and the need for fast processing, human analysis alone is no longer a tractable solution to these problems.

Correspondingly, algorithmic processing for this imagery has improved rapidly, with a recent emphasis on the use of convolutional neural networks (CNNs). CNNs, originally proved significant by Yann LeCun in the late 1990s for solving simple image recognition problems (LeCun et al. 1999), rose to prominence in 2012 after a breakthrough many-layer (deep) architecture was introduced by Alex Krizhevsky (Krizhevsky et al. 2012). The use of learned feature representations from CNNs quickly replaced a host of hand-crafted image features, including histograms of oriented gradients (HOG) (Dalal and Triggs, 2005), local binary patterns (LBP) (Ojala et al. 2002), and Haar-like features (Viola and Jones 2001). 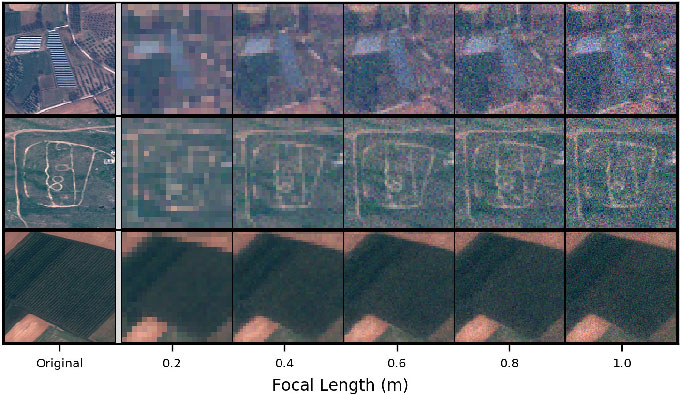 Our approach to modeling algorithm performance with respect to changing image system parameters was straightforward. First, we developed a code that simulates imagery collected by different overhead image systems (seen here, high quality DigitalGlobe imagery). Then, we varied a parameter of this system, such as the optic focal length, and regenerated the entire target dataset with the simulator. Finally, we trained and validated an image recognition model on partitions of this dataset, and measured how image recognition performance changes as a function of the altered system parameter. The three image classes shown here were transformed with varying focal length while other parameters were kept constant (from top to bottom: solar farm, race track, crop field). Original images are on the left separated by a gray column.

This study supports national missions in space security for the reduction of global threats. We developed capabilities to meet national challenges in ISR. Specifically, this research targeted two space security areas of interest: small satellite technologies (our analytic system can be used to engineer satellite optics) and algorithm development and simulation (we researched algorithms targeted to satellite image data).

We developed a methodology for optimizing remote sensing parameters with respect to the performance of deep learning models on real overhead image data. We demonstrated a tool that implements this methodology and conducted a variety of experiments using different sensor and learning parameters.

An implication of this work is that all overhead systems that (1) have been designed to optimize for the National Imagery Interpretability Rating Scale (NIIRS) using the GIQE and (2) produce imagery that is analyzed with CNNs have been designed non-optimally. Designing systems based on the methods described in this paper could yield more optimal systems for CNN processing. Further, these methods can be applied to any visual recognition model. When a visual recognition model superior to CNNs is introduced, the same study can be conducted and compared against the results presented here.

Federal agencies have expressed significant interest in this research, which has the potential to be expanded both in theoretical and practical directions. Additional theoretical work could include utilizing our methods to develop a new version of the GIQE that can compute a version of the NIIRS specifically for machine recognition. A possible practical application would be to apply our methods to a specific design problem, such as designing a satellite imaging system with a budget limit and recognition-capability requirements.

Dalal, N. and B. Triggs. 2005. "Histograms of Oriented Gradients for Human Detection." In Proceedings of the IEEE Computer Society Conference on Computer Vision and Pattern Recognition, 2005. Volume 1, pp. 886–893. IEEE.