We are examining the impacts of various climate forcing mechanisms to provide a physically based criterion for assessing the ability of global climate models to predict drought in California, helping to narrow the uncertainties of predicting future precipitation changes. This work can inform future climate adaptation programs within DOE relevant to their science and energy goals.

Accurate prediction of future drought risks is crucial for planning and adapting California’s water supply to ensure food and water security and protect natural resources. Resource experts, including municipal, agricultural, and ecological decision makers, rely on model predictions of the conditions expected in the coming decades to plan infrastructure and policy methods of adaptation. Such efforts are currently hindered by the considerable uncertainty in model projections of California’s precipitation over the coming decades. Narrowing the uncertainties related to future precipitation changes is one of the key factors that can help evaluate the likelihood of extreme droughts in the future. In our recent work, we have shown that California precipitation is sensitive to changes in the inter-hemispheric energy balance. This means that hemispherically asymmetric climate forcing or feedbacks can trigger precipitation changes over California and the U.S. southwest (see figure). Consequently, incorrect anthropogenic aerosol or volcanic forcing loading in climate model simulations, or incorrect representation of high-latitude sea ice loss can lead to erroneous predictions of California precipitation. We propose to understand the role of inter-hemispherically asymmetric climate mechanisms in California’s hydroclimate, and the changes they induce in tropical Pacific atmospheric circulation that affect precipitation in California. We intend to examine the impacts of various asymmetric climate forcing mechanisms (e.g., volcano eruptions and aerosols) on California’s precipitation in different models and simulation types. In addition, we will reconstruct California’s climate history over the last 2,000 years and correlate it with global sites that record the tropical changes and their effects. Our work will provide a physically based criterion for assessing the ability of global climate models to predict future drought in California, helping to narrow the uncertainties of predicting future precipitation changes.

Our proposed research will ultimately enable assessment of the impacts of forcing uncertainties on projected precipitation changes over California, as well as provide a physically based criterion for ranking climate model projections based on their expected ability to accurately capture California’s future droughts. We expect to produce the first long, high-resolution reconstruction of California's pre-anthropogenic precipitation, laying the foundation for describing the paleoclimate history of the western United States at sub-decadal scales, with reconstruction of natural regional patterns of climate variability such as El Niño Southern Oscillation and the Pacific Decadal Oscillation. We intend to perform analysis of historical simulations forced with two different volcanic data sets in a single-model framework, as well as analysis of historical simulations and future projections. We will further examine and model Mono Lake records and correlate times of extreme wet and dry change at California's Mono Lake to the records from the Santa Barbara Basin and the Cariaco Basin located on the northern continental shelf of Venezuela. We will also verify and further understand the links inferred from the paleontology data using results from model simulations. Our research could eliminate or downscale less-reliable model projections, helping to reduce the range of projected precipitation changes for California. Reduction in uncertainty is of considerable importance for climate resiliency and adaptation efforts because it provides information on the quality of the worst-case scenario. Better understanding of the likelihood of future mega-droughts can strongly benefit existing climate resiliency and security efforts.

The project outcomes will directly contribute to Lawrence Livermore's goal of improved resiliency to climate change in the mission focus area of energy and climate security, and will form a basis for future climate adaptation programs within DOE relevant to their science and energy goals. This work leverages unique Livermore capabilities in climate modeling and model analysis, in support of the core competency in high-performance computing, simulation, and data science. 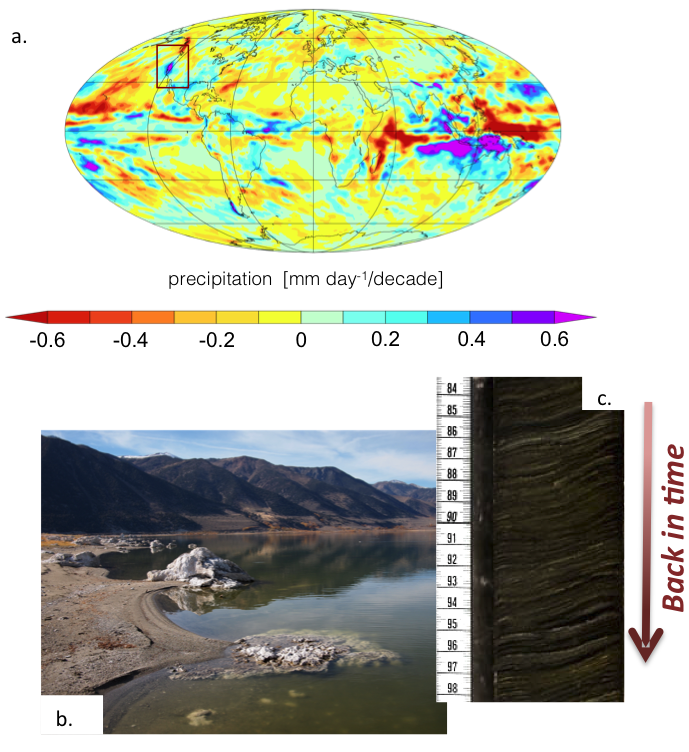 Model reconstructions of hemispherically asymmetric climate forcings suggest that California’s precipitation may be affected by high-latitude events. Precipitation trend differences from 1998 to 2011 between two climate simulations forced with different estimates of volcanic aerosol forcing (a) show that inter-hemispheric differences in the imposed volcanic forcing yield coherent differences in temperature and precipitation. The history of geological, biological, and chemical conditions in lakes such as Mono Lake (b) are recorded in the accumulation of layers of mud on the lake bottom (c). Analysis of the layers helps to reconstruct climate parameters in California’s past, and can be compared to model reconstructions to better understand Earth’s climate system.