Our goal was to demonstrate, via testing of experimental hardware, a new concept in pulsed-power sources that has the potential to achieve power densities orders of magnitude greater than the current state of the art. We employed high-speed flywheel rotors coupled with pulsed coil windings in a Halbach-array architecture to develop this unique compact high-power pulsed generator. A Halbach array is an arrangement of permanent magnets that augments the magnetic field on one side of the array, while cancelling the field to near zero on the other. In our new generator concept, the magnetic field for the Halbach array is produced by an array of pulsed conductors (coils) that simulate the fields of permanent magnet bars, but at much higher fields than are possible with permanent magnets. We made significant progress toward our goal, including (1) completing the engineering, design, analysis and fabrication of key hardware components; (2) validating that these components could be fabricated to very tight tolerances; (3) completing the engineering and design of the drive system; and (4) performing a concept integration of the entire system into an existing vacuum chamber.

Pulsed power sources are employed today in many arenas, where they play an essential role. In pulsed power, energy is accumulated over a relatively long period of time and then released very quickly, thus increasing instantaneous power. Examples range from their use in research employing particle accelerators and laser systems to military ordnance applications. Although condenser banks are the most commonly used pulsed-power sources, their relatively low-volumetric energy density presents a problem for applications requiring hundreds of megajoules of pulsed electrical energy. In this project, we investigated a new approach to the pulsed-power problem through the design, construction, and testing of a model pulsed generator. The central theme of our project was to construct and test a model based on the concept of a Halbach array of magnetic-field components.

Our basic mechanical system consisted of a stator (the stationary part of a rotary system), mounted to the interior of a vacuum vessel and located between two shaft-mounted flywheels (Figure 1). The shaft and flywheels are intended to rotate at speeds up to 2,300 RPM. The device operates by energizing the circuitry (Halbach arrays) of the spinning flywheels. When the circuitry of the flywheels is energized, an extremely large pulse of electrical energy is generated in the stator circuitry. In this new generator concept, the Halbach-array magnetic field is produced by an array of pulsed conductors (coils) that simulate the fields of permanent magnet bars, but at much higher fields than are possible with permanent magnets.

The concept of using pulsed rotor windings is embodied in the Compulsator, developed at the University of Texas, Austin. These Compulsators, with conventional-design magnetic-field and stator windings have achieved pulsed-power densities on the order of 1,000 kW/kg. However, with its Halbach-array magnetic-field windings (Figure 2) and special stator windings, our new generator was predicted to produce pulsed-power densities an order of magnitude higher than the Compulsator. Initial code simulation results showed excellent power and energy values utilizing the Halbach array concept (Figure 3).

In addition to the Halbach-array magnetic-field winding coils, the other key element in the design is the rotating flywheel itself. The flywheel must be strong enough to withstand the forces imparted on it, but must also be easy to fabricate as well as electrically nonconductive to allow the Halbach coils to be assembled and secured in its interior.

To meet these requirements, the flywheels are fabricated from a G-10 glass–epoxy composite, which has a high tensile strength and excellent electrical insulating properties. Table 1 is a list of the relevant orthotropic mechanical properties of G-10. Here x corresponds to the disk hoop direction, y the radial direction, and z the axial direction. The resulting rotor stress is shown in Table 2, with the corresponding finite-element analysis model (Figure 4).

Table 1. Rotor disk material properties for the nonconductive flywheels for our pulsed-power generator. 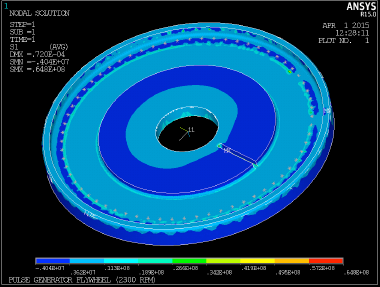 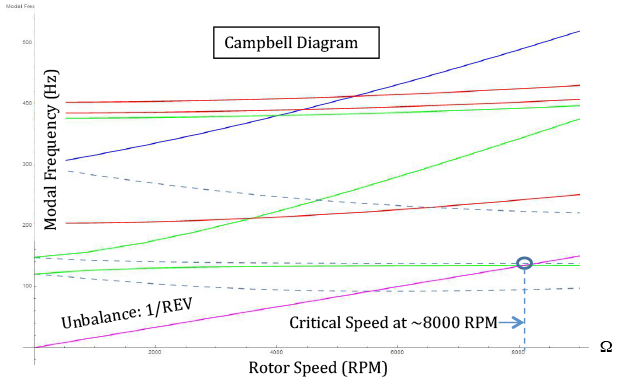 Pulsed-power sources are used to generate and apply energetic beams and high-power energy pulses, with applications in radiation hydrodynamics and Inertial Confinement Fusion that support central Laboratory missions in national and energy security. In addition, pulsed-power technology is central to measurements of material properties relevant to LLNL's advanced materials and manufacturing core competency and contributes to the LLNL core competency in high-energy-density physics.

Significant progress was made to demonstrate the viability of our proposed high-power pulsed generator system. We completed the engineering, design, analysis, and fabrication of the key hardware components of the system, including the rotors, stator, Halbach magnetic-field array coils, stator windings, and the main stator-support hardware. We validated that these components, especially the rotors and stators, could be fabricated to the very tight tolerances required between the two component sub-assemblies. The engineering and design of the drive system and concept integration of the entire system into an existing vacuum chamber was also completed. Discussions with the military indicate that, once the project demonstrates the stated capabilities, support would be available to develop the next level of performance.