We are developing new capabilities to provide accurate and efficient quantum simulations of material properties across an extreme range of densities, pressures, and temperatures. The method formulates density functional theory densities, energies, and forces as spectral integrals, yielding a linearly scaling method that is well suited to massively parallel computer architectures and applicable to metals and insulators.

At Lawrence Livermore, many applications require equation-of-state models that must span up to nine orders of magnitude in both density and temperature. Consequently, we need tools that are both accurate and efficient throughout the entire phase and across diverse physical regimes, including materials under expansion, condensed matter, warm dense matter, and plasmas. Most of these phases are completely inaccessible to focused science experiments, meaning we must rely heavily on theoretical methods. Our current theoretical workhorse for making highly accurate predictions of equation of state is the quantum molecular dynamics method based on density functional theory (used to investigate the electronic structure of many-body systems). While this method has proven highly successful in describing the properties of many materials from first principles, it is typically limited to temperatures below about 5 to 10 eV because of a steep increase in computational cost with increasing temperatures. Alternative methods that are efficient at high temperature become increasingly difficult to use as the temperature falls. A fundamentally different formulation of the equations for density functional theory is needed to enable high-energy-density science at temperatures two to three orders of magnitude higher (1–10 keV) than is currently feasible. Earlier work strongly suggests that quantum molecular dynamics methods based on density functional theory will be accurate at ultrahigh temperatures and pressures, if the computational challenges can be overcome. We are developing such a method to provide accurate and efficient quantum simulations of material properties across an extreme range of densities, pressures, and temperatures. Our spectral quadrature method formulates density functional theory densities, energies, and forces as spectral integrals, yielding a linearly scaling method that is well suited to massively parallel computer architectures and applicable to metals and insulators. We will use the resultant code to determine melt lines as well as shock and release states in the multiple-megabar regime for different categories of materials.

For this project, we expect to deliver standard quantum molecular-dynamics capabilities, which will include various ensembles and access to structural and transport properties, in a highly scalable implementation. Results will also include calculations over a wide variety of densities and temperatures (up to 1 keV) of the equations of state of different classes of materials with very different electronic band gaps and metallization properties, including molecular compounds and covalent extended, ionic, and metallic systems. In addition, we will determine the melting line and high-temperature behavior of different classes of materials such as iron, water, magnesium oxide, and enstatite, a common rock-forming mineral, at multiple-megabar pressures. If time permits, we also will use this new capability to establish the mass–radius relationships for super-Earth exoplanets. This work will address a crucial gap in our current theoretical capabilities that is limiting our ability to fully leverage exciting, new, high-energy-density experimental facilities such as the Linac Coherent Light Source at the SLAC National Accelerator Laboratory at Stanford and Lawrence Livermore's National Ignition Facility.

The capabilities we are developing will form a critical part of the theoretical and computational infrastructure of LLNL, enable high-energy-density science in the warm dense matter regime, and will provide a completely new capability at ultrahigh temperatures for addressing new science. Thus, this project will enhance the Laboratory's core competencies in high-energy-density science and high-performance computing, simulation, and data science, and supports the DOE goal in strengthening key science, technology, and engineering capabilities.

In FY17 we completed the development of two approaches to large-scale, high-temperature quantum molecular dynamics. Specifically, we (1) developed the Fermi-Operator Expansion Quantum Molecular Dynamics (FOE-QMD) code; (2) optimized the code on the Livermore Sequoia and the Los Alamos Trinity high-performance computing platforms; (3) performed isochoric FOE-QMD simulations to calculate the carbon Hugoniot (a curve of compression states for analyzing a material's equation of state) up to gigabar pressures; (4) developed the Spectral Quadrature Density Functional Theory (SQDFT) code; (5) implemented this code on our high-performance computing platforms; and (6) incorporated, for both approaches, the optimized norm-conserving Vanderbilt potential formulation to allow accurate calculations at extreme pressure and temperature conditions and constructed multi-projector optimized pseudopotentials for aluminum, carbon, and silicon. 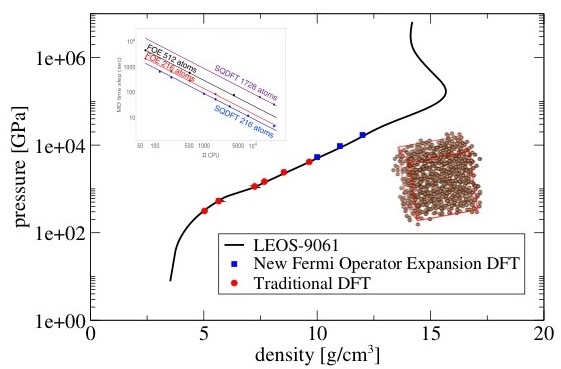 Top left inset: Both our Fermi-Operator Expansion (FOE) and Spectral Quadrature Density Functional Theory (SQDFT) implementations show good strong scaling on Lawrence Livermore’s high-performance computing cluster, Quartz: The time to solution for a density functional theory (DFT) molecular dynamics (MD) step reaches ~100 s even for a large system of 1,728 atoms. For carbon at 12 g/cc and 565,000 K, we find that our matrix-vector SQDFT implementation is faster than our sparse matrix FOE implementation for the same accuracy. Main image: We calculated the carbon Hugoniot and obtained good agreement with the equation of state 9061, confirming the accuracy of the Livermore equation of state (LEOS) 9061 model in that range. The points from the traditional (diagonalization and orthogonalization) implementation of DFT—which become computationally intractable at high temperature (the highest pressure "red" point is at a temperature of 100,000 K)—are shown in red. The points from our new implementation of DFT, which can reach much higher temperatures and pressures, are shown in blue. Right inset: Snapshot of our system of 216 Carbon atoms at 565,000 K and 12 g/cc.