To determine whether phase transitions to complex structural forms are ubiquitous at high pressures, we are measuring changes in ionization potential of iron and magnesium under high pressure. These measurements could provide key experimental benchmarking data for theoretical models that could be used in assessing the effectiveness and reliability of the U.S. nuclear weapons stockpile as well as for Inertial Confinement Fusion designs.

The effect of surrounding electrons on an atom's ionization potential (the energy required to remove an electron from a neutral atom) drives a multitude of fundamental material properties including electron and heat transport, opacity, compressibility, crystal structure, and bonding. When density increases, the enhanced interactions of neighboring atoms increases the energy of bound electrons, which then require less energy to ionize. Equation-of-state (EOS) models for describing stellar and planetary interiors as well as stockpile materials and Inertial Confinement Fusion employ simplified approximations of this changing ionization potential. Recent studies to benchmark these approximations at high pressure and temperature have yielded potentially conflicting results, but each study accesses a different phase-space range, and effects of temperature and density are difficult to decouple. In solid and low-electronvolt temperature regimes, simple approximations for this changing ionization potential (referred to as the ionization potential depression in the plasma phase) are usually inaccurate. We are performing in situ measurements of properties predicted to be sensitive to or correlated with density-driven changes in ionization potential. Specifically, we are examining the absorption edge (a substance's abrupt increase in absorption of electromagnetic radiation as frequency is increased) and the crystal structure to test and benchmark model predictions for ionization potential depression at high density. These predictions will be used to refine EOS models for materials under high pressure and density. Using the OMEGA laser facility at the Laboratory for Laser Energetics, New York, and Livermore's National Ignition Facility (NIF), we are performing x-ray inelastic scattering and x-ray diffraction measurements on iron and magnesium compressed to high density using ramp-shaped laser pulses.

We expect to determine whether the predicted phase transition sequence in iron and magnesium is observed experimentally, to determine the structures of the high-pressure phases, and to investigate the possibility of detecting additional diffraction features from non-nuclear maxima in electron densities (i.e., a maximum electron density that appears at a position away, rather than near, the nucleus) in the material's structural lattice. Experimental data generated will be key for developing ionization models in the high-energy-density regime. We are also experimentally investigating and benchmarking model predictions for high-pressure electride phase formation in magnesium (the formation of an ionic compound in which the axion is an electron). Our specific objectives are to confirm or refute predictions of high-pressure crystal structure and the conditions for transitions, and to find evidence for the presence of non-nuclear maxima in electron densities in the lattice. Successful project results will impact EOS models used for Inertial Confinement Fusion and stockpile stewardship, and will improve understanding of the fundamental processes in Earth’s inner core boundary, such as thermal conduction from the core to the mantle.

Our work addresses the NNSA goal of managing and understanding the condition of the nuclear weapons stockpile, and supports the Laboratory’s core competency in high-energy-density science through examination of model predictions for ionization potential depression at high pressure and density. 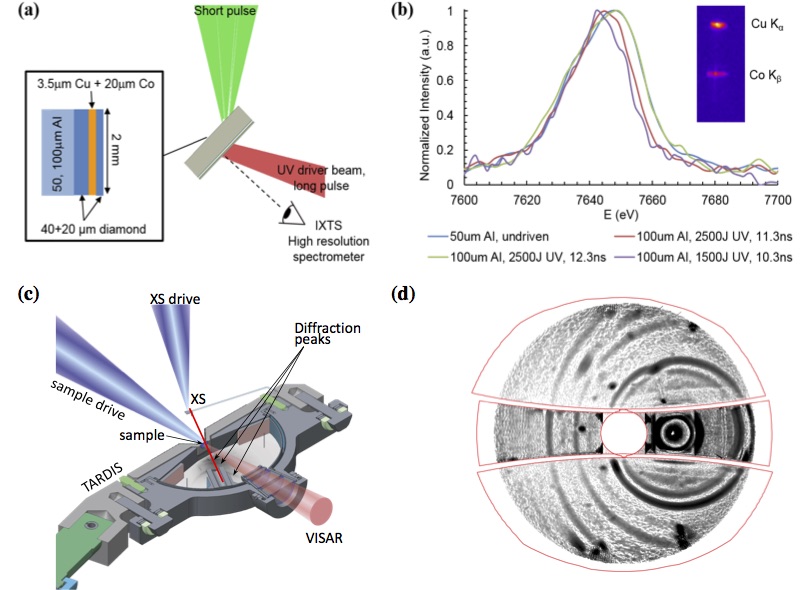 This figure illustrates the four accomplishments listed above. (a) A schematic of the experimental configuration for the OMEGA EP laser facility designed to probe density-driven changes in electron energy levels (of cobalt, in this case). Inset: The target geometry. The long pulse driver beam on the front side compresses the copper (Cu) and cobalt (Co) layers to high density through ramp compression. The thick aluminum layer on the backside interacting with a short pulse generates hot electrons that can induce fluorescence in Cu and Co. The fluorescence lines are measured using a high-resolution imaging x-ray Thomson spectrometer (IXTS). (b) An example of the raw image from IXTS is shown in the inset. Both the Cu Kα and Co Kß lines are observed with high signal-to-noise ratio. Under the designed experimental conditions, the Cu Kα line is not subject to an energy shift and can be used as a reference. The lineouts of Co Kß (normalized with the peak intensity) under different driver conditions and delays are plotted. The energy shifts are so small that they are within the resolution of the spectrometer (~ 4 eV). (c) A schematic of the experimental configuration for the National Ignition Facility (NIF) designed to probe changes in crystal structure resulting from density-driven changes in electronic energy levels in magnesium. The TARDIS (TARget Diffraction In Situ) powder x-ray diffraction diagnostic registers diffracted x-rays on three image plates lining a semicircular chamber. The x-ray source (XS) is helium-alpha radiation from a foil of germanium (Ge) or zinc (Zn), excited using 24 NIF beams. The x-rays are scattered off of the magnesium (Mg) sample (compressed by 16 NIF beams) in transmission. The pressure in the sample is probed with a velocity diagnostic (VISAR: Velocity Interferometer System for Any Reflector). (d) High-quality data on the three TARDIS image plates, background-subtracted and warped into a stereographic view where Bragg diffraction peaks appear as concentric circles. The data shows a new phase of Mg at 300 GPa.