We generated and studied matter in extreme conditions by irradiating targets of nanometer-scale wire arrays with high-energy (up to 100 J), short pulses (less than 1 ps) from Livermore's Titan laser. Our study extended by two orders of magnitude in energy the recent experiments conducted at Colorado State University in Fort Collins, Colorado, and allowed the generation and study of a parameter space of hot and dense matter that has rarely been possible before. The results of our work support Lawrence Livermore's high-energy-density physics efforts and contribute to the NNSA goal of strengthening the nation's science, technology, and engineering base.

Recent experiments at Colorado State University (CSU) have shown that trapping of femtosecond laser pulses of high intensity deep within ordered nanowire arrays can volumetrically heat dense matter into a new ultra-hot plasma regime, with electron densities nearly 100 times greater than the typical critical density and multi-keV temperatures (Purvis 2013). The experiments used a small laser, providing 60-fs pulses, to obtain extraordinarily high degrees of ionization (e.g., 52 times ionized gold) and gigabar pressures. All the plasma parameters are computed to be exceptional: The wire core is calculated to reach thermal pressures of 10 Gbar and a thermal energy density of 2 GJ cm−3. While the plasma created after the dissolved wires expands, collides, and thermalizes, it is computed to have a thermal energy density of 0.3 GJ cm−3 and a pressure of 1–2 Gbar. This pressure is nearly two orders of magnitude larger than that in Inertial Confinement Fusion hohlraum plasmas and is comparable to that created in the central hot spot of the imploded fusion capsule in National Ignition Facility (NIF) experiments at high laser energy. The main underlying concept is mostly based on light-trapping of short laser pulses deep within the array of aligned nanowires, before the nanowires explode and form a hot, uniform plasma. The laser light interacts with material at densities approaching solid with almost 100% laser radiation absorption efficiency.

In this project, we intended to scale the volumetric plasma-heating scheme up by using laser pulses with 100 times more energy provided by the 2ω (532-nm) laser pulses from the Titan laser available at Lawrence Livermore's Jupiter Laser Facility (JLF). Realizing larger plasma volumes and longer plasma lifetimes allowed us to explore extremely high energy densities, temperatures, and degrees of ionization.

The main goals of our research project were to (1) design and fabricate structured nanotargets that have an average density of 0.1–0.5 of a solid and are suitable for the Titan laser parameters; (2) investigate experimentally and numerically the unique absorption mechanisms and radiation properties of these targets, which are completely different from the ones seen in common laser–plasma interactions with solid targets; and (3) measure and optimize the hard x-ray emission from the nanostructured targets and evaluate their potential use as the next-generation x-ray backlighters.

We achieved all of our goals. Moreover, we integrated the experiments on Titan with smaller scale experiments on the Comet laser of the JLF and on the high-power titanium–sapphire laser available at CSU (Purvis 2013).

Our irradiation scheme (Figure 1) involved having an ultra-short laser pulse irradiate an array of vertically aligned nanowires at normal incidence, which waveguides the laser energy several micrometers deep into the target before the interwire distance collapses due to Coulomb explosions and thermal expansion. At this point, a critical density plasma quickly fills the volume between the nanowires. The system then returns to a regime similar to a typical laser-irradiated planar target, in which high densities and high temperatures cannot be obtained simultaneously. Any significant pre-pulse would impair the process, making a high-contrast laser system paramount. 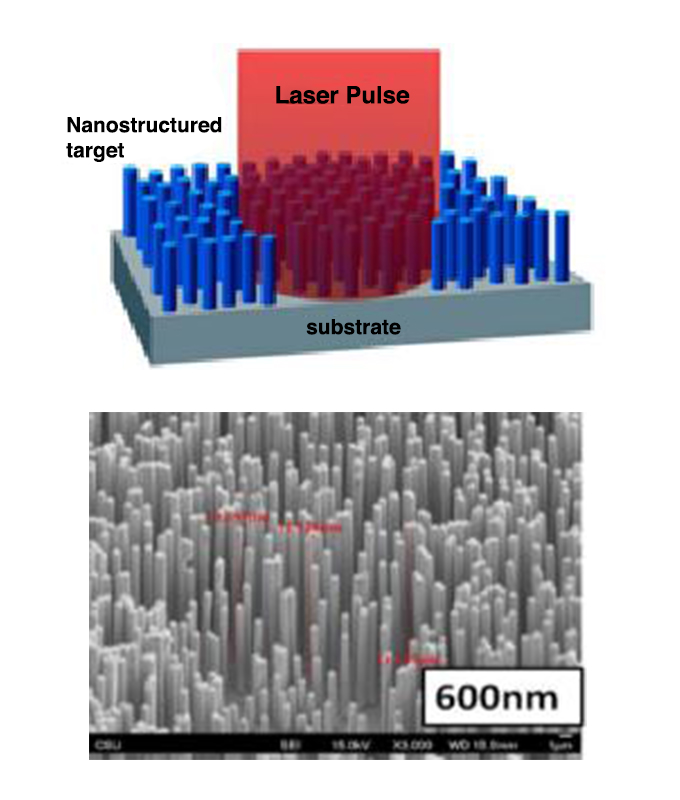 By design, the wire–wire separation is chosen to avoid, as much as possible, filling the interwire channels before the end of the laser pulse, to maintain the efficient coupling of laser radiation to bulk matter energy.

The 2ω laser pulses from Titan can provide up to ~40 J and pulse durations between ~0.7 ps and ~2 ps; with pre-pulse contrast better than 108. In this case, simple scaling models and particle-in-cell (PIC) simulations have suggested nanowires of diameters ranging from 400 nm to 1 µm in diameter, for densities about 12% of solid. Using one-dimensional inorganic nanostructure templates, we built arrays of gold, silver, nickel, and palladium nanowires that are vertically oriented and have controlled lengths ranging from 4 µm up to 30 µm. An example of these nanostructured targets is shown in Figure 1.

Figure 2 shows the results of measurements of large-angle back-reflection obtained on Titan when using nickel nanostructured targets, as compared to nickel foils.

The Titan short laser pulses (2ω, ~1 ps, 10 µm full-width at half-maximum spot size, and ~40 J) were incident at 19° from the target norm to project the reflected laser light onto a diffusively reflective plate made of Spectralon. The plate is placed to capture the reflected light within 40°in horizontal (beam plane) and vertical directions. The reflection was captured by a charge-coupled-device camera. In this particular case, the nanowire targets show a reduction of ~4x in the reflectivity of laser light, indicating stronger coupling of laser energy into the structured targets as compared to flat foils.

Extensive measurements of the x-ray emission from the nanostructured arrays were performed at Titan using a suite of diagnostics. The instrumentation included: (1) a von Hamos x-ray spectrometer to cover the spectral region between 7.5 keV and 8.5 keV; (2) two transmission crystal spectrometers (TCA) covering a combined spectral region between 11 keV and 120 keV; (3) three step-wedge spectrometers covering the spectral region >60 keV; and (4) an array of eight filtered photodiodes capable of measuring in the 1–20 keV range, depending on the filters selected. We conducted experiments with aligned nanowire arrays made of gold, silver, and nickel wires with diameters between 0.1 µm and 1 µm. 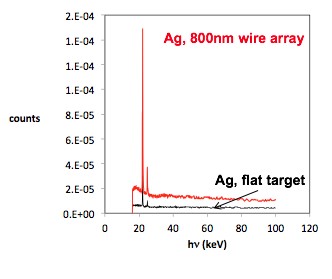 Figure 3. Comparison of spectra produced by irradiating silver foils and silver nanowire arrays, 800 nm in diameter (4e7 wires/cm2) with the 2ω laser pulses, ~2-s long on TITAN. The spectra show a dramatic increase in K-shell emission from the nanostructured targets.

The enhancement in x-ray emission was not limited to line emission. Measurements obtained with a step-wedge spectrometer show the plasmas from gold nanowire targets are hotter than those corresponding to a gold foil. Figure 4(a) shows the value of the electron temperature, kT, that results from fitting the data from the step wedges (25 different tantalum filters of different thickness) with a single-temperature Maxwellian. Data for gold nanowire arrays with wires of different diameter ranging from 0.4 µm to 1 µm are shown in comparison with data corresponding to an gold foil. The values of the electron temperature for the gold nanowire arrays exceed those of the foil target by about a factor of two, and appear to be relatively independent of nanowire diameters. Figure 4(b) shows the corresponding conversion efficiency (CE) in the region above 70 keV as determined from the step-wedge spectrometer. The nanowire arrays are observed to yield a conversion efficiency up to 3x larger than the foil, with little variations with respect to the nanowire diameter.

Figure 4. Enhancement in (a) hot-electron temperature and (b) conversion efficiency into x-ray emission above 70 keV when using gold (Au) nanostructured targets, as compared to gold foils.

During the project we conducted particle-in-cell (PIC) simulations of the plasmas that can be created with a 50 J energy 2ω pulse of 500 fs up to 2 ps in duration, i.e., the parameters of the pulses available from the Titan laser. To understand the target behavior, we used PIC simulations to model the laser–plasma interactions in high-Z gold and silver nanowire arrays. Simulations conducted using the parameters of Titan's second harmonic beamline suggest that it is possible to achieve volumetric heating even with pulse durations that are orders of magnitude longer than those used in the CSU experiment to date. In particular, the simulations show that a 500-fs laser pulse from Titan can penetrate deeply into an array of vertically aligned, 400-nm-diameter gold wires, where average electron densities in excess of 100 times critical can be achieved. The key to couple such a relatively long high-energy laser pulse into the plasma is the unique combination of mechanisms that take place in these nanostructured targets. The ponderomotive potential generated by the relativistic intensities of the Titan laser pulse pushes electrons in the voids between the wires and forms the needle-like wave along the nanowire surface ("surface wave") which penetrates deep into the material. This causes a strong electric field and a return current that propagates back into the wires. The process resembles the formation of Weibel instability in high-field laser interactions. However, in our case, the return electron current path is not spontaneously formed but is set by the wires. The magnitude of the return current at the laser intensities achievable with Titan (up to 1020 W/cm2) might be sufficient to prevent the wires from expanding. The return current even compresses them, allowing an increase of time to deposit the energy before the interwire gap collides.

Such a laser-plasma scheme can be expected to allow for very high conversion efficiency x-ray sources in the multi-keV photon energy range. To achieve high conversion efficiency, a hot and very dense plasma must be created. The spot size selected must be small but still sufficiently large for the radiation cooling time to be less than the hydro-expansion time. Our Radex hydrodynamics and atomic physics code suggests that if most of the laser pump energy can be deposited to volumetrically heat the nano-target array, the broadband emission x-ray conversion efficiency can reach 80–90%. The combination of short radiation cooling time and plasma hydro lifetime will limit the source duration to about 2–3 ps duration.

This project is directly relevant to the Laboratory's focus on high-energy-density physics. It has allowed the generation and study of a parameter space of hot and dense matter that has rarely been possible before. Moreover, the generation of compact ultra-bright x-ray sources based on nanomaterials has great potential for picosecond radiography for Inertial Confinement Fusion (ICF) implosions. Our work also supports the NNSA goal of strengthening the science, technology, and engineering base.

We have demonstrated volumetric plasma-heating and enhanced laser energy absorption from nanostructured targets using laser pulses between 500 fs and 2 ps. We have characterized the hard x-ray emission from such nanostructured targets and shown that the enhanced conversion efficiencies achievable with such targets make them the obvious choice for the next-generation of ultra-bright x-ray sources. We plan to use this scheme on the Advanced Radiographic Capability on the NIF, for the realization of picosecond radiography of ICF targets. We also plan to continue our collaboration with the CSU team to measure the time history of the x-ray emission and refine the measurements of the depth of penetration of the laser energy into the nanostructured targets.