Our goal is to study the physical mechanisms and process parameters controlling the composition, density, thickness, grain structure, and surface morphology of film coatings using the high-power pulsed sputter deposition process. The basic understanding of this process will impact a broad range of applications, including laser targets for future Inertial Confinement Fusion and high-energy-density campaigns, as well as industrial applications including corrosion- and wear-resistant films, nanometer-scale laminates, x-ray optics, and optical material coatings.

Novel materials synthesis and development using physical vapor deposition requires fundamental understanding of plasma conditions and film-growth dynamics. A central theme of this work is to control a material's microstructure during sputtering deposition. Over the last few decades, the difficulty of producing heavy-metal coatings has been one of the major bottlenecks limiting our studies of the important family of Inertial Confinement Fusion designs with colliding-shell targets. Our previous attempts to fabricate such coatings by conventional direct-current magnetron sputtering have had limited success because of inherent complexity and our limited understanding of the deposition process. With this research, we intend to investigate the physics of a novel and promising pulsed-sputter deposition process. Our goal is to expand the scientific foundation of sputter-deposition processes through a combination of well-posed experiments and state-of-the-art modeling. We plan to achieve this goal by deploying a novel set of in situ diagnostics during pulsed deposition, allowing us to dynamically monitor plasma conditions, ion flux and energy distributions, substrate temperature, and film stress. Additionally, we will model film nucleation and growth by a combination of classical molecular dynamics and a novel parallel kinetic Monte Carlo algorithm (models calculated from random sampling), with experimental data used both for input to simulations and for validation of simulation results. Our goal is to identify physical mechanisms and relevant process parameters controlling the composition, density, thickness, grain structure, and surface morphology of the films. The outcome of this project could have significant scientific and programmatic impacts, enabling novel materials synthesis and an experimental laser campaign with colliding-shell target designs. The basic understanding of the deposition process will also have direct and important implications for a broad range of industrial applications.

We expect to expand Lawrence Livermore National Laboratory's existing magnetron-sputtering capabilities by building state-of-the-art in situ diagnostics, adding high-power impulse magnetron capability, and gaining fundamental understanding of film-deposition dynamics through diagnosing the plasma as well as modeling of film growth. We intend to (1) investigate the fundamental physics of the high-power impulse magnetron sputtering processes and their correlation to film stress and microstructure control, (2) develop an understanding of dopant effects on microstructure evolution, (3) correlate unique microstructure of high-power impulse magnetron-sputtering films with mechanical properties and failure processes of metallic films, (4) provide an understanding of film microstructure control by a combination of classical molecular dynamics and a novel parallel kinetic Monte Carlo algorithm, and (5) produce monolithic and gradient-density metal shells of importance to high-energy-density and Inertial Confinement Fusion target programs. The understanding gained from the successful conclusion of this project could open up new opportunities to fabricate novel materials and eventually help build new types of targets for future Inertial Confinement Fusion and high-energy-density campaigns. The basic understanding of the deposition process will also have direct and important implications to a broad range of industrial applications of sputter-deposited coatings, including corrosion- and wear-resistant films, nanometer-scale laminates, x-ray optics, and optical material coatings.

Our research is expected to expand the Laboratory's core competency of advanced materials and manufacturing to build necessary knowledge for the fabrication of next-generation metal shells for laser targets that are poised to have long-lasting impacts on stockpile stewardship science and inertial fusion science and technology. This research is therefore relevant to DOE goals in nuclear security, as well as science and energy. The project also supports the Laboratory's core competency in high-performance computing, simulation, and data science that is required for our modeling methodology.

In FY17 we (1) successfully installed a high-power impulse-magnetron-sputtering system (HiPIMS) in a film coater at the Laboratory's National Ignition Facility; (2) performed a series of HiPIMS film coatings on copper, aluminum, tantalum, and platinum, which helped us build baseline HiPIMS parameters for each material; (3) measured the residual stresses, microstructure, and mechanical properties of the above-mentioned films; (4) conducted HiPIMS coatings on three-dimensional printed lattice structures; and (5) hired a new postdoctoral researcher. 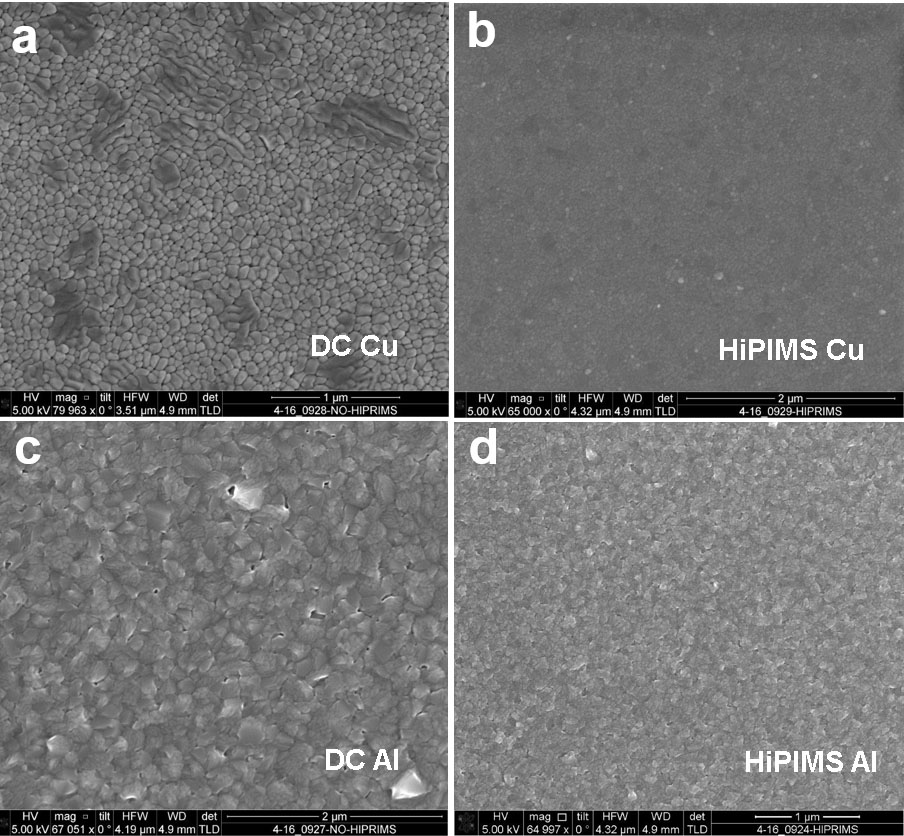