Nuclear Fission in a Plasma

Fission plays a critical role in the nucleosynthesis of heavy elements. However, fission-fragment properties have never been calculated for astrophysical plasmas in 75 years of fission physics. Some of the same physics will also play a role in fission at Livermore's National Ignition Facility (NIF). Our objective is to calculate how fission-fragment properties are modified by the tremendous plasma densities inside the crusts of neutron stars, as well as the high neutron fluxes in neutron stars and at NIF. Our theory effort focuses on plutonium-240 fission in those environments, with similar effects expected for other actinides. We will calculate the effect of both neutron-star and NIF plasmas on fission by building on existing Laboratory codes and techniques for the microscopic description of fission, and incorporating nucleus and plasma coupling.

Nuclear fission can be significantly altered inside a plasma. We do not currently know precisely what species of fragments are produced by fission inside neutron-star and supernovae plasmas, or what their energies and other properties are. We expect to provide the first-ever predictions of these quantities, shedding light on the origin of the elements heavier than iron in nature. We will also provide the interpretation needed by proposed fission experiments at NIF. If successful, our research will open the door to further efforts in nucleosynthesis, atomic nuclear-coupling effects at NIF, and muonic atoms, which share similar physics with the proposed work and are relevant to both basic science and applications to energy production in nuclear reactors.

This project is of direct relevance to the Laboratory's nuclear, chemical, and isotopic science and technology core competency by calculating nuclear properties in plasma environments, addressing fundamental questions in the nucleosynthesis of elements heavier than iron, and shedding light on formation of the heaviest elements in nature by studying fission—the process that limits the maximum size of those elements in the astrophysical environments where they are born. Furthermore, this project develops a critical competency for studies at the interface between nuclear and high-energy-density science that will directly benefit the analysis and interpretation of nuclear diagnostics at NIF, and more generally advance stockpile stewardship science.

In FY15 we (1) focused on the calculation of the initial state for fission, developing codes to compute strength functions (one of the critical ingredients in the calculation of population cross sections) starting from protons, neutrons, and an effective interaction between them; (2) performed preliminary calculations of strength functions for plutonium-240 using these codes; (3) began implementing codes to calculate nuclear level density (another critical ingredient in cross-section calculations) in a microscopic approach; and (4) performed a level density and strength function measurement for plutonium-243 at the Oslo Cyclotron Laboratory in Norway, which can be used to benchmark the codes. 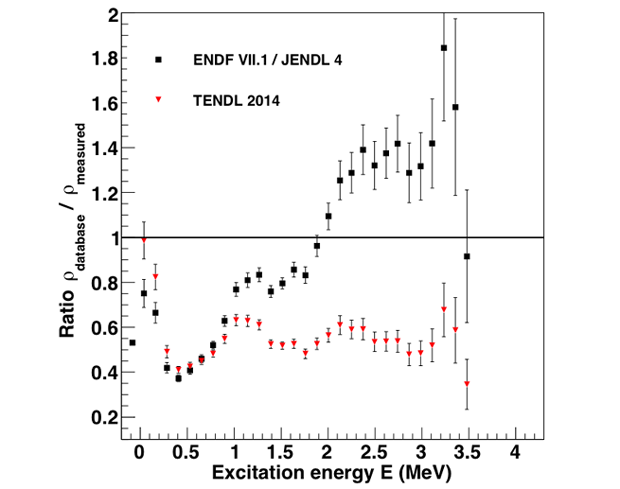 We are evaluating the population mechanisms of actinide nuclei in plasmas. The level density of the nucleus is a critical ingredient in the description of these population mechanisms, and our recent measurement has revealed serious departures from the accepted values in standard databases. Shown is the ratio of measured level density to the values in two popular databases as a function of excitation energy.