There are no future climate change scenarios that can keep warming below 1.5°C without significant carbon dioxide removal (CDR). This challenge requires investments in basic and applied research in all potential CDR strategies, and it is unlikely that there will be one single CDR strategy that meets the needs of avoiding deleterious climate impacts and ecological devastation due to ocean acidification. We therefore sought to determine the feasibility of developing an ocean inorganic carbon CDR pathway using Lawrence Livermore National Laboratory’s (LLNL's) CO 2 capture capsule technology. Using extant carbon-capture technology of silicon-based capsules and composite media containing sodium carbonate in synthetic instant-ocean and local Northern California seawater (33.4 psu, ~2.1 mM Σ dissolved inorganic carbon) we have determined that both capsules and one version of extruded composite media lose CO 3 . This drives up pH in ambient water but does not remove inorganic carbon. The current technology could be viable for local alkalinity addition and amelioration of ocean acidification. At a density of ~10 g capsules per L seawater, the capsules could be cycled up to 5 times prior to losing all of their intrinsic CO 3 . No authigenic or spontaneous precipitation of calcium carbonate (aragonite polymorph) occurred during the experiments. Authigenic precipitation, simply through increased pH and an aragonite saturation state, did not spontaneously (and within limited seeding experiments) occur at most seawater salinities, with or without elevated (>40°C) temperature. In addition, we found that microbial biofouling of the capsules in real seawater is not problematic.

The recognized detriment to societal health and well-being due to anthropogenic induced climate change and concomitant ocean acidification impacts resulted in the acceptance of the Paris Agreement at the 23 rd Conference of the Parties (UNFCC 2015). This agreement, strongly based on the projections of future climate change from the Coupled Model Intercomparison Project (Phase 5) and the Fifth Assessment Report of the Intergovernmental Panel on Climate Change (IPCC 2014), expresses a desire to keep anthropogenically induced warming below 2°C, and ideally below 1.5°C, globally. The implementation of the Paris Agreement and similar "=1.5–2°C" scenarios requires a transition to non-greenhouse-gas-producing energy sources (e.g., CO 2 , CH 4 , N 2 O). This mitigation strategy is combined with a suite of CDR activities. There are no climate change scenarios that can keep warming below 1.5°C without significant CDR, and CDR is necessary in the vast majority of <2°C scenarios (see figure below). This challenge requires investments in basic and applied research in all potential CDR strategies (NRC 2015). Simply, it is unlikely that there will be one single CDR strategy that meets all the needs of avoiding deleterious climate impacts and ecological devastation due to ocean acidification. Here, we determine the feasibility of an ocean inorganic carbon CDR pathway using LLNL’s CO 2 capture capsule technology (Vericella et al. 2015). 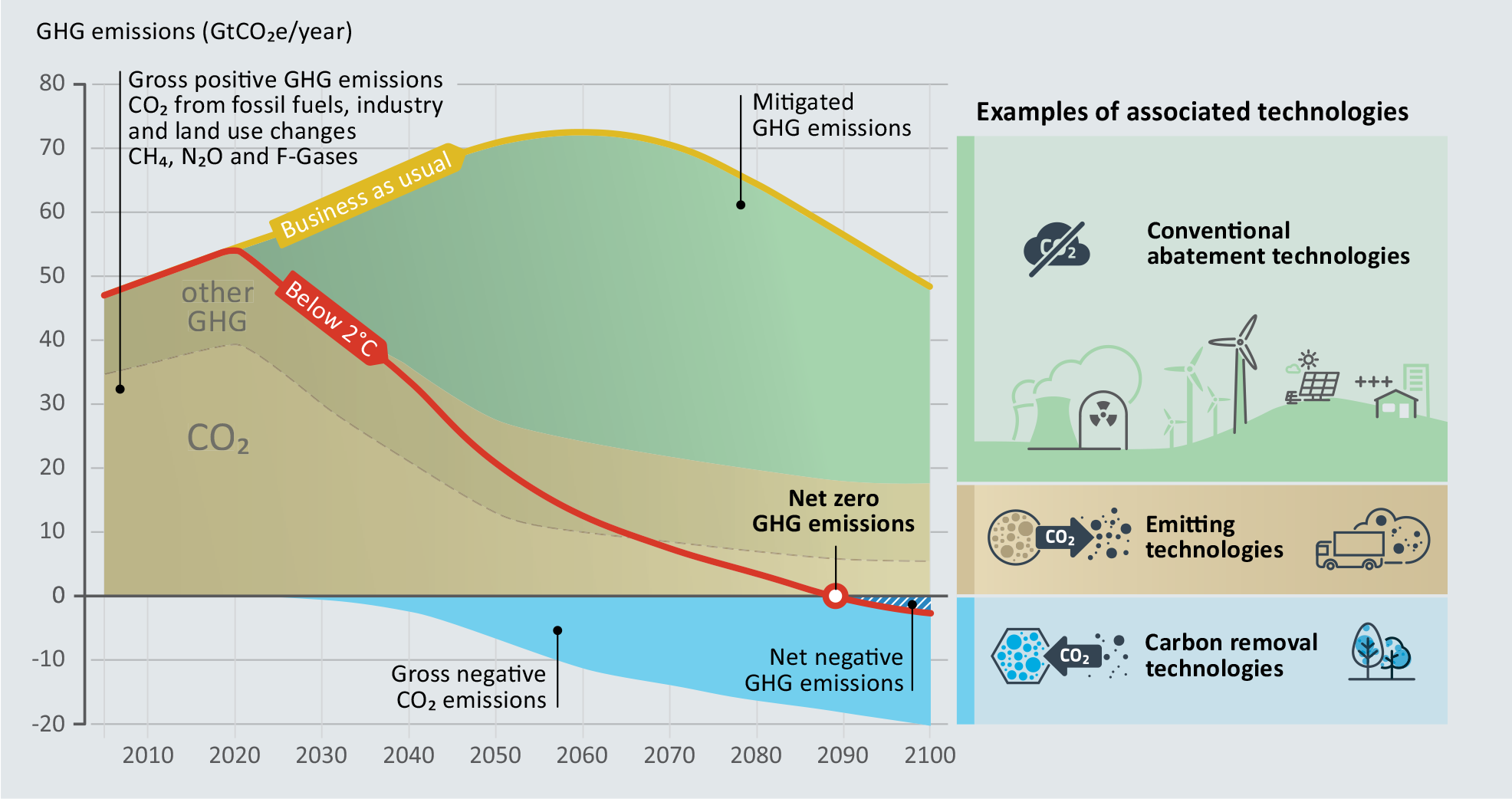 Greenhouse gas (GHG) emissions (GtCO 2 equivalent/year) as a function of time. In this scenario, peak CO 2 emissions occur in 2020 and future emissions are replaced via renewables in combination with CO 2 removal strategies. The total CO 2 budget is capped by the best estimates to keep global warming <2°C. Roadmaps based on integrated assessment models indicate that by 2050, ~7GtCO 2 /yr of negative emissions are required, with the mass increasing to 2100. Adapted from Smith and Friedmann (2017).

Presently, ~50 metric tons (Mt) of CO 2 /yr are sequestered in direct air-capture pilot projects. These pilot projects are focused at point-source, power-generation locations (NRC 2015). The capture of free air is challenging because the carbon concentration (~410 ppm) is 100–300 x lower than that of flue gases and requires 2–10x the energy of carbon capture and sequestration (CCS) from point sources. By contrast, oceanic surface water, which equilibrates with atmospheric CO 2 on the timescale of months, has a total inorganic carbon concentration of ~2.3 mM. Compared to free air, seawater is a natural carbon concentrator, >100x that of air per unit volume, with the carbon distributed among three species: CO 2(aq) , bicarbonate ion (HCO 3 - ), and carbonate ion (CO 3 = ), with CO 2(aq) a percent or less of the total dissolved inorganic carbon concentration.

Polymer microcapsules composed of liquid carbonate cores and highly permeable silicone shells, which have been used as flue gas carbon-capture technology (Vericella et al. 2015) and complementary carbon-capture media, were tested in an effort to trap surface-seawater dissolved CO 2 (CO 2(aq) : eqn 1). Because much of the warm surface ocean is supersaturated with respect to calcium carbonate (CaCO 3 ), the process of removing CO 2(aq) from seawater may lead to the precipitation of CaCO 3 .

The precipitation of CaCO 3 consumes bicarbonate ions, leading to an increase in CO 2(aq) . If this occurs, the effect should increase the overall carbon-capture efficiency of the capsules relative to total dissolved inorganic carbon. The CO 2 that is trapped in the capsule would be available for Fischer-Tropsch conversion to industrial products (i.e., a renewable pathway) or for sequestration (CDR-CCS pathway). If precipitated, CaCO 3 could be recovered and used as lime mud for agriculture, in aggregates for building materials, or for replenishment of beaches. At the very least, a rise in pH and decrease in TDIC would be an equivalent to an alkalinity addition, which would ameliorate ocean acidification and enhance calcification by marine biota (e.g., mollusks, gastropods, corals, etc.).

This proposal supports the Laboratory director’s initiative in carbon research and advances the DOE goal of delivering scientific discoveries and major scientific tools capable of transforming our understanding of nature and strengthening the connection between advances in fundamental science and technological innovation. This cross-cutting study supports the Laboratory’s research challenge in energy and climate security while enhancing core competencies in advanced materials and manufacturing and earth and atmospheric science. This feasibility study will provide a venue for the project team to engage and partner with the state, University of California, and other institutions and non-governmental organizations in the realm of energy and climate security.

The results of this project indicate that the extant flue-gas capture technology engineered at LLNL is not suitable for removal of dissolved inorganic carbon from seawater. Alternative formulations and designs that reduce (if not halt) leaching of CO 3 ion out of the technology may provide a pathway forward. The current technology might be used for alkalinity addition, useful to ameliorate the local effects of ocean acidification.

Additionally, we conclude that precipitation of a carbonate phase is not likely to occur during removal of CO 2 from seawater, especially at capsule to sea water mass ratios expected to be most effective for low operating costs (less than 10:1). In order to provide significant CaCO 3 precipitation for local use, it may be necessary to run the extraction through an additional CO 2 removal procedure and heat 10–15 o C or more above ambient.