Researchers are developing new image-analysis algorithms that yield actionable inferences from low signal-to-noise data gathered from different ground- and space-based observatories that might otherwise be discarded. Integrating these image processing and inference algorithms with constellations of small satellites, can provide a tool that is highly applicable to space security missions.

The 2011 Nobel Prize in Physics was awarded for the discovery of the accelerating expansion of the universe, thought to be driven by "dark energy," which has no explanation by known physical phenomena. Lawrence Livermore contributes leading roles in two next-generation dark-energy surveys: the ground-based Large Synoptic Survey Telescope in northern Chile and the National Aeronautics and Space Administration's space-based WFIRST-AFTA (Wide-Field Infrared Survey Telescope and Astrophysics Focused Telescope Assets). Both surveys will image billions of galaxies, and for the first time we will be limited by systematics rather than statistical errors. We plan to improve dark-energy parameter constraints from these surveys by an order of magnitude with new image-analysis algorithms that synthesize many low signal-to-noise observations to reduce both systematic and statistical errors in the measurements of gravitational lensing effects on galaxy images. Our approach relies on numerical forward simulation of images, including source properties (e.g., brightness, morphology, and spectral features), observing conditions (e.g., atmosphere turbulence or telescope image aberrations), and detector response. These simulations are embedded into a Monte Carlo statistical framework, which relies on repeated random sampling to compute results, to characterize noise distributions and propagate maximal information about sources in compressed form. Because this characterization of images retains all statistical information, optimal combinations of information from multiple images is possible to derive new insights that are often unachievable with any single observation. Because many space surveillance applications face similar challenges, we will also develop the dual-use applications of our image reduction and analysis algorithms for key national security missions.

Traditional astronomical image analysis relies on point estimators of source properties extracted into a catalog for downstream processing. Such point estimators invariably become biased and sub-optimal as various systematic errors become important and as the signal-to-noise ratio of the measurements decrease. We expect our approach will change the way that most astronomical imaging is analyzed and improve the inferences about cosmological parameters and galaxy properties by an order of magnitude to enable distinguishing dark energy from modified gravity. With a statistically sampled forward-model of the sensor pixel data, our algorithms are less prone to biased inferences and can regulate measurements with arbitrarily low signal-to-noise. In some cases, our algorithms promise to significantly reduce risk in key science requirements. For space domain awareness, our program may create actionable inferences from low signal-to-noise data from different observatories that might otherwise be discarded. We expect to create new capabilities for integrating numerous economical sensors to replace a few conventional expensive facilities. Specific tasks include (1) scaling image analysis and hierarchical inference algorithms, (2) building an orbital debris catalog from optical transit surveys, (3) deriving new dark-energy constraints from initial dark-energy surveys, (4) preparing for the Large Synoptic Survey Telescope commissioning and testing our analysis methodology on next-stage dark-energy surveys, and (5) simulating an integrated space surveillance mission with multiple observatories. A successful project will establish a leading role for Livermore in the science analyses from the two dark-energy survey telescopes and enable new mission concepts for space surveillance.

The dual-use application of our image processing and inference algorithms will meet the research and development requirements in the development of constellations of small satellites to perform national security missions, including detailed modeling and simulation of constellations and design of algorithms to combine information from similar sensors. This effort supports DOE goals in science and security and the Laboratory's mission challenge area in space security. Our methodology is applicable to the Laboratory’s core competency in high-performance computing, simulation, and data science.

In FY17 we (1) demonstrated image analysis components using both simulated and real data from a variety of input sources, including new detection algorithms and Bayesian probability models for characterizing sources in the images; (2) deployed computational tools on high-performance computing resources and tested the scalability of certain algorithms with input data size; and (3) developed algorithm modifications for data calibration and utilization of multi-epoch imagery to filter desired signals from background noise. 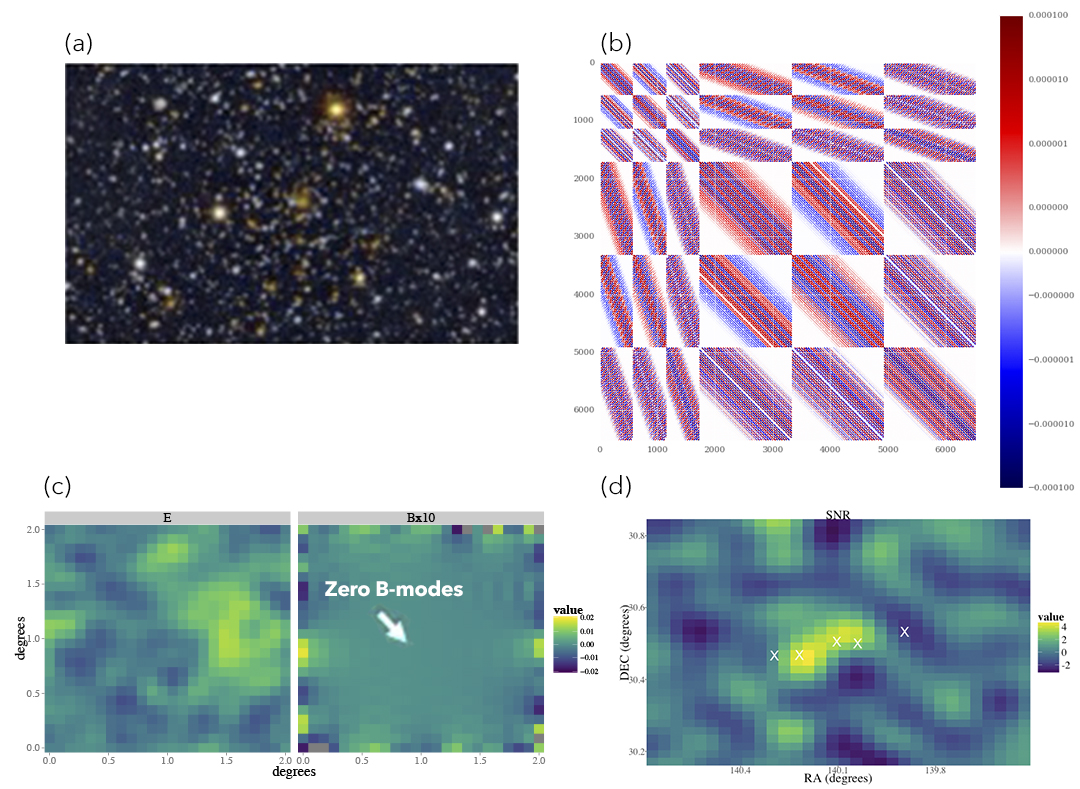 The cosmological matter distribution can be inferred from gravitational lensing distortions of background galaxy images by mass along the line-of-sight. (a) The Deep Lens Survey is a four-band optical imaging survey for which galaxy image moments have been measured to sub-percent accuracy enabling cosmological “mass mapping.” (b) The lensing distortions and magnifications of galaxy images in a field such as in (a) are highly correlated, requiring specification of the covariance matrix of the lensing effects over the field—a potentially high-dimensional problem in spatial statistics. (c) Using a physics-based covariance model we can accurately separate “E-type” and “B-type” contributions to the lensing field (analogous to curl-free or gradient-free vector fields). (d) Our new mass mapping algorithm correctly reproduces the mass distribution in a known system of merging galaxy clusters (yellow peaks and white “x” symbols).