We explored laser-plasma acceleration of electrons and subsequent x-ray emission processes on large-scale picosecond lasers. X rays produced by laser-plasma accelerators can provide broadband photon-energy sources of millions of electron volts. X-ray photons can pass through dense plasmas, and absorption of the x rays can be directly measured via spectroscopy and other imaging techniques. In this context, x-ray sources from laser-plasma accelerators can be a versatile tool to probe high-energy-density (HED) science experiments. This project explored the theoretical and experimental aspects of these x-ray sources on several picosecond/kilojoule-class laser systems: the National Ignition Facility's Advanced Radiographic Capability (ARC) laser and the Titan laser at Lawrence Livermore National Laboratory (LLNL), the OMEGA Extended Performance laser at the Laboratory for Laser Energetics (University of Rochester), and the Megajoule Laser Facility's PETAL laser at the The French Alternative Energies and Atomic Energy Commission (France). We demonstrated the acceleration of electrons beyond 300 MeV, as well as the production of x rays using betatron, Compton-scattering, and Bremsstrahlung radiation. Our research has opened the prospect of using novel x-ray backlighters at large-scale, HED science laser drivers.

Understanding the relationship between temperature, pressure, and density in extreme environments is one of the challenges of HED plasma science (Basic Energy Sciences Advisory Committee 2009, Robinson and Plummer 2009, National Research Council 2003, Davidson et al. 2004, National Research Council 2007, Rosner and Browne 2007, Hicks et al. 2010). Solving this relationship will help to answer fundamental questions regarding the evolution of stars, the formation of planets, how to harness the power of stars to provide a limitless source of energy, as well as the mechanisms of stellar explosions. Thanks to the breakthroughs achieved via experiments conducted at high-intensity laser facilities, scientists are now able to recreate in the laboratory conditions once thought to be attainable only in the interiors of stars and planets.

One approach to this problem is to study how high-intensity radiation affects the behavior of HED plasmas. These plasmas exist in a non-equilibrium state and are difficult to study. They are also extremely transient in nature. One advantage of using external sources of particles and photons to study HED plasmas is that the effects of their interaction with an HED plasma can be directly measured. Unlike visible light, x-ray photons can pass through dense plasmas, and we can measure the absorption of the x rays directly via spectroscopy and other imaging techniques.

At large-scale laser facilities such as the National Ignition Facility (NIF), backlighters are primarily K-alpha or Bremsstrahlung x-ray sources from laser–solid target interaction. They are used for a number of experiments and platforms such as convergent ablators to measure the ablator density profile (Hicks et al. 2010) and target diffraction in-situ, where four NIF quad lasers are focused onto a backlighter foil to generate He-alpha x rays (Ahmed et al. 2013). In parallel, x-ray sources are being developed at NIF for several applications. For Compton radiography, Bremsstrahlung x-ray sources are produced by focusing a NIF laser on a gold nanowire (Tommasini et al. 2011). More recently, 13 keV Kr K-alpha x-ray sources from gas pipes have been produced with a 3 percent conversion efficiency (Fournier et al. 2013). However, the current x-ray sources available at NIF are isotropic (meaning that most of the photons they produce are lost), not easily tunable, and limited in efficiency beyond 30 keV.

Within this context, we investigated x-ray emission mechanisms based on laser wakefield acceleration (Esarey et al. 2009) using ARC. In a laser wakefield accelerator (LWFA), a high-powered laser is focused on a gas target to generate a plasma. As the laser travels through the plasma, it is trailed by a wave in its wake, similar to that of a boat on a calm lake. If the laser intensity is sufficiently high, the wave amplitude can increase to the point where it starts to break. Electrons are then injected into the wake and are accelerated as though "surfing" the wave. Since the accelerating field associated with the plasma wave is so immense (and traveling at almost the speed of light), the injected electrons are rapidly propelled to relativistic energies over a distance of only a few millimeters to a centimeter. A LWFA provides significant improvements in size and capability by exploiting x-ray generation mechanisms (Tajima and Dawson 1979). Early LWFA experiments included the acceleration of electrons up to a few hundred MeV in the self-modulated laser wakefield (SMLWF) or forced laser wakefield regime.

A notable application of LWFAs is to generate ultra-compact light sources with novel properties. For example, betatron x-ray radiation is readily produced when electrons are accelerated at an ultrahigh gradient in an LWFA (see figure). 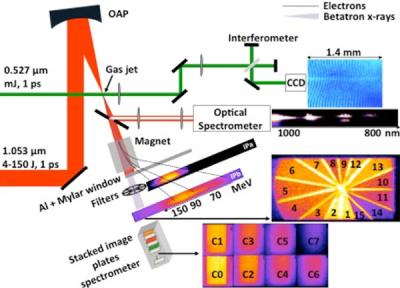 Experimental platform developed on the Titan laser at the Jupiter Laser Facility (Livermore) to demonstrate betatron radiation in the self-modulated regime. The laser ( red ) is focused (via an off-axis parabola, OAP) onto a gas jet, generating electrons and betatron x rays. (CCD = charge-coupled device)

Our baseline experiment focused a kilojoule-class, picosecond-pulse-duration laser onto a gas target to accelerate electrons up to a few hundred MeV through SMLWFA. In turn, the electrons can generate x rays via three different mechanisms: betatron, Compton scattering, and Bremsstrahlung radiation. If the laser pulse is several plasma periods long and is sufficiently intense (as it was the case in our experiments), electrons can be accelerated by the interplay of SMLWFA and direct laser acceleration (Adachi et al. 2006). We first studied the SMLWFA regime as a mechanism for betatron x ray emission in experiments at the Jupiter laser facility, using the Titan laser. In the three-dimensional, highly nonlinear LWFA regime, when a short-duration, highly intense laser pulse is focused inside a plasma, the laser force completely expels the plasma electrons away from the strong-intensity regions to form an ion bubble in the wake of the pulse (Lu et al. 2007). Electrons trapped at the back of this structure are accelerated by the focusing force of the more massive and immobile ions to produce broadband, synchrotron-like radiation in the keV energy range.

We explored two additional mechanisms (Compton scattering and Bremsstrahlung radiation), because of their ability to produce photons in a higher photon energy range than betatron radiation alone. In Compton scattering, the laser beam exits the LWFA and collides with a foil of low-Z material (e.g., polyethylene) placed just after the plasma at a small angle with respect to the axis normal to the laser. This creates a plasma mirror that reflects the laser beam backward to interact with the high-energy electron beam and generate a bright gamma-ray beam via inverse Compton scattering, where laser photons scatter off the relativistic electron beam to get their energy upshifted to the MeV level. A low-Z material is used as a plasma mirror to increase reflectivity and to reduce the Bremsstrahlung radiation created by the laser and the electrons hitting the foil. In the case of Bremsstrahlung radiation, the LWFA electron beam collides with a high-Z material, which generates a bright MeV beam. As the electrons pass near the nuclei of the material, they decelerate and their path is deflected. Due to energy conservation, the lost energy is emitted as a high-energy photon. If the electron comes to a total stop, it transfers all its energy into the photon; therefore, the maximum energy of the gamma-ray beam matches the maximum energy of the electron beam.

This research supports NNSA and Laboratory goals in stockpile stewardship. By exploring novel x-ray backlighters, this project helped maintain the Laboratory's leadership in HED science and supported its strategic focus area in lasers and optical materials science and technology. It leveraged Livermore's expertise in accelerator, laser, and x-ray sciences and strengthened the Laboratory's leadership position in the field of ultrafast x-ray light sources. This project provided a better understanding of material properties and phase transitions in extreme conditions of temperature and pressure, which is important for stockpile stewardship and in situ material characterization during manufacturing. Our research also helped reduce uncertainties in plasma properties, another important goal for stockpile stewardship science.

We explored the development of novel x-ray sources using laser–plasma acceleration in the self-modulated regime on large-scale, picosecond/kilojoule-class laser systems. These x-ray sources will be useful for future HED science experiments. The continuing development of x-ray sources based on laser–plasma acceleration at various user facilities such as the OMEGA Extended Performance laser at the Laboratory for Laser Energetics, the NIF's ARC laser, and the Megajoule Laser Facility's PETAL laser will provide an additional x-ray and electron-beam capability of interest to many research groups. Our project has strengthened the Laboratory's leadership in materials and HED science and the application of short-pulse lasers for the generation of secondary x-ray radiation sources.

This project was also instrumental to obtaining further funds through the DOE's Early Career Research Program to develop applications for the x-ray sources we explored. X-ray sources from laser–plasma accelerators may be a transformational tool for investigating HED plasmas and materials under extreme conditions. The list of potential customers for this work is very broad and spans the disciplines of materials characterization and imaging in industry, medicine, chemistry, protein crystallography, biology, inertial fusion, and HED sciences.