Many properties of the high-energy-density environments in nuclear weapons tests, advanced laser-fusion experiments, the interior of stars, and other astrophysical bodies must be inferred from the resulting long-lived radioactive nuclei that are produced. These radioactive nuclei are most easily and sensitively identified by studying the characteristic gamma rays emitted during decay. We plan to make highly accurate gamma-ray branching-ratio measurements for a group of high-atomic-number rare earth isotopes to greatly improve the precision and reliability with which the fission yield and reaction products in high-energy-density environments can be determined. The branching ratio for a species is the ratio of the partial decay constant to the overall decay constant. These branching ratios are important nuclear-data inputs to physics models used to obtain a first-principles understanding of weapons science and high-energy-density physics. Techniques will be developed that take advantage of new radioactive-beam facilities, such as DOE's CARIBU located at Argonne National Laboratory, to produce radioactive samples and perform decay spectroscopy measurements.

We expect to measure the gamma-ray branching ratios of four high-atomic-number rare earth isotopes (neodymium-147, europium-156, cerium-144, and thulium-167), with 1 to 2% precision to greatly improve the nuclear data used to understand fission yield and reaction-in-flight neutrons (see figure). We will develop an isotope-harvesting technique that can be used to make ultrapure radioactive sources at CARIBU and other radioactive-beam facilities such as the Facility for Rare Isotope Beams at Michigan State University. In addition, we will develop a 4-pi gas proportional detector that can be used to precisely measure branching ratios of any fission product or reaction product with a half-life over one hour. Finally, we anticipate attracting a postdoctoral researcher and two graduate students to Livermore to assist with the challenge of developing new precision measurements of radioactive decay.

We will address important nuclear data needs for stockpile stewardship science by exploiting new opportunities to harvest fission products and developing new techniques for precision decay measurements. This effort also aligns with the Laboratory core competencies of nuclear, chemical, and isotopic science and technology and high-energy-density science. For several isotopes, nuclear data limits the precision with which conclusions can be drawn about high-energy-density environments of interest to the weapons complex (absolute fission-product yield studies) and ignition fusion efforts (the flux of reaction-in-flight neutrons).

In FY16 we (1) obtained results for the gamma-ray branching ratios for the decay of thulium-167 and the thulium-169(n,3n) and thulium-167 reaction cross-section; (2) developed a 4-pi gas proportional counter to detect low-energy beta particles with nearly 100% efficiency; (3) characterized this detector using samples produced at the University of California, Irvine reactor facility; (4) set up this detector, a high-purity germanium detector, and associated electronics at Lawrence Livermore; and (5) performed the first harvesting experiment at CARIBU at Argonne and collected high-quality, pure samples of zirconium-95 on ultrathin carbon foils. These samples will be used to understand systematic effects on the way to 1% branching ratio measurements. 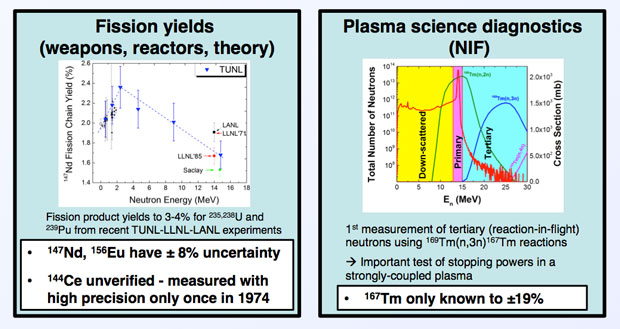 The impact of Improved gamma-ray emission branching ratios for high-atomic-number rare earth isotopes to greatly improve the precision and reliability with which the fission yield and reaction products in high-energy-density environments can be determined.