Magnetic fields are abound in the universe, yet their generation and amplification mechanisms remain an active topic of research. Astrophysical plasma interactions play a key role in these processes. Weibel-mediated collisionless shocks are a possible mechanism for magnetic field generation. These shocks are collisionless because the interaction is mediated by collective plasma effects, not Coulomb collisions as is typical for most terrestrial shocks. The Weibel instability occurs under high-velocity plasma flow conditions. Our work focused on exploring the fundamental microphysics of collisionless shock formation and magnetic-field amplification using laser-produced plasma streams that can be associated with the dynamics of astrophysical processes. Specifically, we generated high-velocity counterstreaming plasma to investigate Weibel-mediated collisionless shocks and the amplification of magnetic fields. The OMEGA laser facilities at the Laboratory for Laser Energetics in New York and Lawrence Livermore National Laboratory's National Ignition Facility were used to produce very-high-velocity, hot plasmas. The evolution of the plasma conditions (temperature, density, velocity, etc.) and magnetic fields were characterized using a suite of diagnostics. The resulting measurements were instrumental in furthering our understanding of counterstreaming plasma flows (Ross et al. 2017) (in both the collisonless and collisional regimes) and plasma instabilities (Park et al. 2016). These results enhance our understanding of fundamental plasma physics related to astrophysical magnetic fields.

We were interested in studying magnetic field generation via the Weibel instability and amplification via the turbulent dynamo mechanism. The Weibel instability is the result of an anisotropy in momentum space, which is most simply understood as a superposition of counterstreaming plasma flows in the regime of collisionless shocks. It is similar to a two-stream instability except the perturbations are electromagnetic and cause current filamentation and magnetic field generation. In the regime where the Weibel instability is dominant, the electromagnetic fields grow exponentially and reduce the anisotropy in momentum space; plasma-flow kinetic energy (in the interpenetrating region) is converted into magnetic field energy, impeding the flow, and a shock is thus formed. Astrophysical shocks may be responsible for accelerating nonthermal particles, driving turbulence, generating and amplifying magnetic fields, and effectively decelerating supersonic flows. These processes occur in a variety of scenarios, one being the interaction of a supernova remnant (SNR) with interstellar clouds (Bamba et al. 2003). Even in the presence of a uniform local interstellar medium upstream of the SNR blast wave, density gradients act as a source of turbulence for the macroscopic amplification of magnetic fields. These are very fundamental concepts, yet their microphysics had never been produced and studied experimentally in a laboratory setting.

Laser-driven experiments on the National Ignition Facility (NIF) and the OMEGA Laser Facility are capable of creating interpenetrating plasmas of ~1000 km/s with ion density of ~1×1018–1×1019 ions per cubic centimeter and ion temperature of >1 keV (Ross et al. 2012). Through scaling relations (Ryutov et al. 2012), these experiments can be related to astrophysical environments. Experimental platforms were developed on the OMEGA laser and the NIF. The NIF platform is shown in Figure 1a. Two plastic or low-Z foils are each irradiated with 5–250 kJ of laser energy. Plasma is ablated from each foil and counter-propagates. The electron and ion temperature, the electron density, and the plasma flow velocity were measured at the center point between the foils as a function of time using Thomson scattering on OMEGA and stimulated Raman scattering on the NIF. The plasma conditions were measured for both a single- and double-flow configuration. Rapid heating of the electrons and ions was observed for the double-flow configuration on OMEGA and explained by a novel coupling of the ion two-stream instability and electron-ion drag (Ross et al. 2013). The plastic foils can be deuterated, producing protons and neutrons from the interaction region. The self-generated protons are shown as contours in Figure 1b. 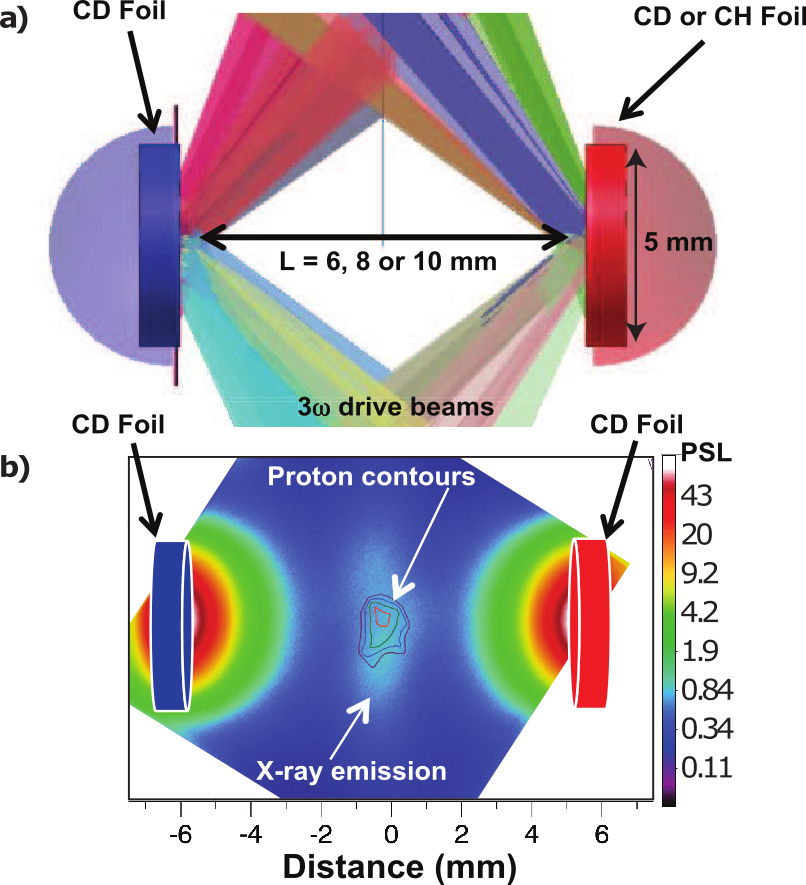 Figure 1. a) The NIF experimental platform we developed with plastic (CH) or deuterated plastic (CD) foils. b) The observed x-ray image and proton image (contours) measured in distance (mm) and photostimulated luminescence (PSL). Through scaling relations (Ryutov et al. 2012), this experiment can be related to astrophysical environments.

While Thomson scattering is excellent for characterizing the localized plasma conditions, it is insensitive to magnetic fields in the regimes of interest. We completed experiments on the NIF and OMEGA using DHe3 proton backlighters to better understand the macroscopic magnetic fields. In double-flow experiments on OMEGA 60 and OMEGA-EP, remarkable and unexpected large self-organizing electromagnetic field structures (Kugland et al. 2012) were discovered and Wiebel-induced filamentation were observed as a function of time using these DHe3 filled capsules to generate proton radiographs. We conjectured that the origin of the large vertical plate structure was advection of the Biermann battery fields from the vicinity of the targets with a subsequent recompression in the mid-plane (Kugland et al. 2013, Ryutov et al. 2013). We believe the filament structure, also observed in the interaction region between the foil targets (shown in Figure 2), is evidence of Weibel filament formation and the precursor to a Weibel-mediated collsionless shock. 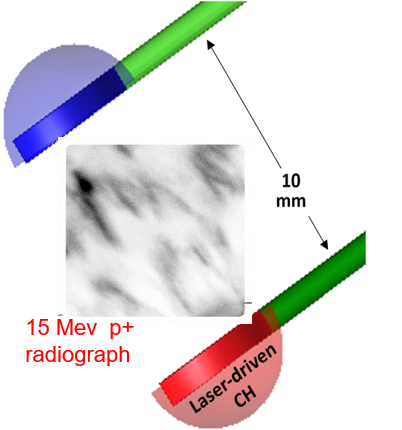 Figure 2. DHe3 proton gradiograph of the magnetic field structure. The filament structure observed in the interaction region between the plastic (CH) foil targets could be the precursor to a Weibel-mediated collisionless shock.

Our approach consisted of (1) designing properly scaled experiments that can explain magnetohydrodynamic (MHD) processes using available MHD and particle-in-cell (PIC) codes, (2) performing NIF experiments to observe formation of collisionless shocks, (3) utilizing the Thomson scattering to understand the plasma conditions, (4) using DHe3 proton radiography to measure the strength of the electric and magnetic fields on NIF, (5) performing high power laser experiments on OMEGA and OMEGA-EP to demonstrate the concept, and (6) generating new science results from all aspects of this work.

To further our understanding of Weibel-mediated shocks we measured double- and single-flow plasma and magnetic-field parameters in new experimental configurations. We studied the effect on the counterstream plasma flows as a function of different laser parameters such as beam-spot sizes, laser geometry, energy, pulse duration, and target-surface finish, including artificially induced ripples or three-dimensional patterns. We also investigated shaped targets, which showed increased on-axis plasma density. We optimized the target and laser configuration to satisfy the basic requirements for creating a Weibel-mediated collisionless shock in a laboratory setting.

By optimizing the plasma conditions in our experiments, primarily increasing the electron density and the plasma flow velocity of the interacting flows, we maintained a long mean free path while decreasing the electromagnetic instability scale length. We confirmed that the mean free path was still large by measuring the flow velocity, density, and temperature using Thomson scattering. The goal of a fully formed collisionless shock remained elusive. We observed an increase only by a factor of two in density between single- and double-flows, whereas a fully formed shock will generate an increase in density by a factor of 3 or 4. We continue to believe that a fully formed Weibel-mediated shock can only be achieved on the NIF. While we were unable to confirm a fully formed collisionless shock, we were able to confirm formation and evolution of Weibel-mediated plasma filaments.

The experimental regime is challenging to model due to the range of temporal and spatial scales involved. The laser–target interaction is modeled with HYDRA (a high-energy-density physics code; Marinak et al. 1998), and the results for a single foil (single flow) are then used to initialize LSP (a large-scale plasma simulations code; Welch et al. 2004) and OSIRIS (a fast ignition simulation code; Fonseca et al. 2008) simulations that accurately model the collisionless interaction, which is something that HYDRA, by its nature, ignores. We completed a series of OSIRIS simulations (shown in Figure 3) that show that the generation of a fully formed collisionless shock is possible on the NIF. The challenge is reaching the proper plasma conditions and maintaining those plasma conditions long enough for the instability to fully develop into a shock.

Hydrodynamic simulations (which include the laser–target interaction physics) have shown that greatly increasing the laser energy delivered to the target foils will significantly increase the density, velocity, and temperatures of the flows. Using 150 kJ of laser energy, an amount of laser energy only accessible on the NIF, resulted in conditions where Weibel-mediated collisionless shock formation was predicted, if the plasma conditions were maintained for longer than 5 ns. Maintaining these conditions in the laboratory for longer than 1–2 ns proved challenging. Optimizing the plasma evolution in time to maintain the required density and velocity is a work in progress. 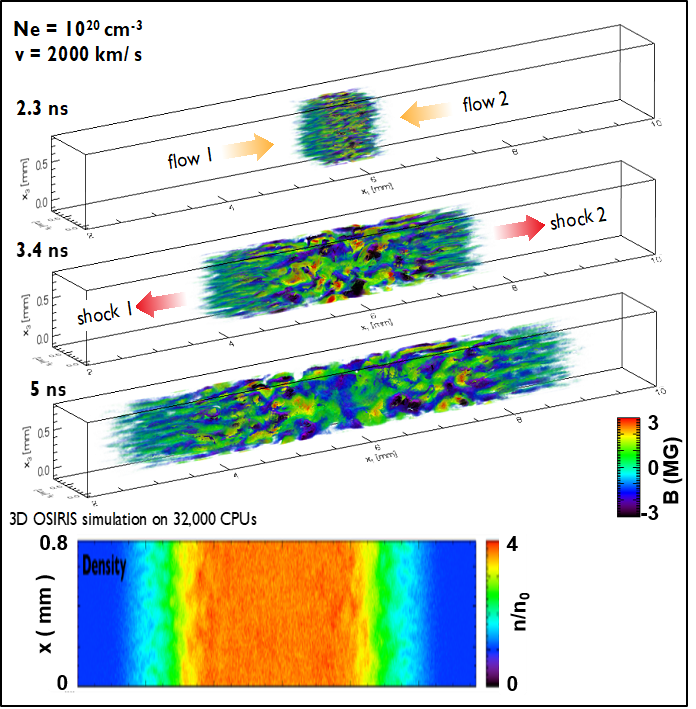 Figure 3. Particle-in-cell simulations showing the evolution of the magnetic (B) field for three different times. The lower image shows the electron density at 5 ns where n0 is the initial single-stream density. (Ne = electron density; v = velocity)

Our laboratory astrophysics study produced understanding of the basic plasma physics processes and dynamics underlying astrophysical magnetic field generation, in support of LLNL's core competency in high-energy-density science relevant to the scientific understanding of plasmas relevant to Inertial Confinement Fusion experiments. This work also supports the NNSA goal of strengthening the science, technology, and engineering base.

We completed a series of experiments on the NIF, OMEGA, and OMEGA EP. Excellent experimental data combined with detailed modeling and theory significantly enhanced our understanding of the Weibel instability and its role in the generation of a magnetic fields. Moving forward, our work will be continued by the Astrophysical Collisionless Shock Experiments with Lasers (ACSEL) collaboration with experimental proposals for both the NIF and OMEGA planned. There are also plans to use the platform developed here to study high-energy particle acceleration.