A three-year investigation into improving and optimizing double-shell target designs for potential applications to inertial fusion energy has identified challenges, potential solutions, and optimization strategies. The overarching challenge is delivering fuel to the inside of the inner shell without incurring large hydrodynamic instability growth from deviations from perfect spherical symmetry in target fabrication. A solution was identified whereby a “peek” hole of diameter less than 1 μm allows for fuel filling from an intra-shell annular fuel reservoir via a fill-tube through the outer shell only. State-of-the-art radiation-hydrodynamic simulations confirmed that this scheme could be a viable option for demonstrating ignition at Livermore's National Ignition Facility and eventual applications in inertial fusion energy. A new scheme was devised that could lead to nearly 50% improved coupling efficiency from the outer shell to the inner shell using a high-atomic-number flyer plate on the inside of the outer shell. The advertised improvement could lead to more robust ignition thresholds at advanced high-power laser facilities and reduced requirements on the laser driver for more efficient inertial fusion energy schemes.

Interest continues in demonstrating ignition on the National Ignition Facility with central hot-spot ignition using a cryogenic low-atomic-number single shell. This ignition mode may be simply characterized as initiated by an ignition spark at fuel center followed by a propagating thermonuclear burn wave into the surrounding dense, annular fuel layer. The conditions needed to support central hot-spot ignition are challenging, requiring ignition temperatures of nearly 10 keV, a compressed fuel density of at least several hundred times the density of liquid water, and careful entropy control of the fuel via well-timed shocks that accelerate the shell to sufficiently high velocity of 350 km/s or more. The relatively high-threshold ignition temperature is a result of the low-high-atomic-number shell surrounding the fuel and the associated high radiation losses. The principle advantage of the central hot-spot scheme is that high gains in energy are possible, leading to attractive options for inertial fusion energy.

A complementary double-shell ignition scheme involves volume ignition where the entire compressed fuel acts as a spark or “hot spot.” The inner shell that encapsulates the fuel is designed to be a high-atomic-number material such as gold that both provides the inertia to confine the fuel sufficiently long and lowers the threshold ignition temperature to several kiloelectronvolts because of the high albedo of this shell. The outer shell acts as a collector of x rays generated within the hohlraum containing the fuel shell that are converted to kinetic energy for subsequent coupling to the inner shell. This double-shell ignition design suffers from lower gain because of the relatively low mass of fuel and the risk of mixing between the high-atomic-number inner shell and low-atomic-number fuel (e.g., deuterium and tritium), to quench any incipient ignition. Furthermore, target fabrication of ignition-scale double shells is a daunting challenge because of the required precision assembly and machining of the shells, not to mention the need to deliver sufficient amounts of fuel to the inner shell without introducing intolerably large seeds for hydro-instability growth (e.g., via fill tubes). Still, the double-shell design could be a vehicle for demonstrating ignition because of its relatively low threshold ignition temperature, insensitivity to fuel entropy, and looser requirements on laser pulse shaping.

Given the challenges to date with demonstrating ignition with single shells, a study of the benefits and challenges with double-shell ignition is timely. Beyond a vehicle for demonstrating ignition, double shells could also look attractive for inertial fusion energy if the gains can be shown to be competitive with central hot-spot designs. This research effort was dedicated to scrutinizing the double-shell platform for challenges that needed to be identified and overcome as well as potential breakthroughs in performance and energy gain that may have been overlooked in the past. The objective of this completed research effort was to perform a reassessment of the attributes of an igniting double shell and whether transformative improvements in target design could be identified and developed for furthering relevant Laboratory missions.

Two-dimensional integrated hohlraum simulations with an oversized rugby-like hohlraum predicted that the outer shell of aluminum could absorb nearly 700 kJ of energy. By comparison, the central hot-spot designs remain near or below 200 kJ. Ignition performance margin varies linearly with absorbed energy, so an oversized double-shell target has a factor-of-several improvement in margin. The all-aluminum ablator (or outer shell) was chosen to be a suitable compromise between acceptable ablation efficiency and nearly complete screening of hohlraum preheat, particularly the harder x rays (>2 keV) from the M-band of gold or depleted uranium. This type of ablator is novel from the standpoint of serving as its own dopant instead of requiring the addition of mid-atomic-number dopants such as silicon, germanium, tungsten, and copper in mainline central hot-spot ablators, (e.g., carbon–hydrogen and high-density carbon and beryllium). By effectively screening out hohlraum-generated x rays with an aluminum outer shell, the use of a high-atomic-number flyer plate for added velocity multiplication when the two shells collide becomes advantageous. Without effective preheat control, a several-micrometer-thick flyer plate will absorb the transmitted x rays and expand to low density, rendering the degree of velocity multiplication very minimal. One-dimensional simulations show the aluminum outer shell absorbing nearly all of the hohlraum x rays so that the flyer-plate density (such as with copper and gold) remained high before colliding with the inner shell. Figure 1 shows the expected increase of inner-shell kinetic energy with use of a 2.5-μm gold flyer plate on the inner surface of the outer shell. A near 50% improvement in shell kinetic energy is predicted over the all-aluminum ablator case with use of a 2.5-μm-thick gold flyer plate. The ability to significantly leverage the degree of coupling to the inner shell with use of a flyer plate is tantamount to effectively increasing the amount of drive energy available. An immediate challenge with the use of flyer plates is the risk that hydrodynamic instability growth may compromise the integrity of the layer before shell collision. However, use of a manufactured compositional gradient from pure gold to aluminum over a several micrometer distance can greatly mitigate this risk. 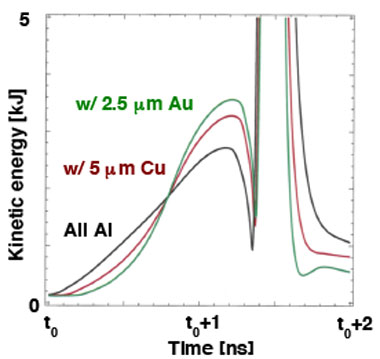 We identified and quantified the risk in using a standard National Ignition Facility fill-tube in the double-shell target that now penetrates both shells. Highly resolved two-dimensional radiation-hydrodynamic simulations showed inner-shell breakup from a jet of high-atomic-number material launched by the fill-tube feature. There are two reasons why such a fill-tube assembly would be particularly problematic for double shells. First, the high- and low-atomic-number interface between the gold pusher (inner shell) and deuterium–tritium fuel is very sensitive to the amount of gold penetrating the fuel and leaves little margin for hydro-instability growth. Second, the smaller scale (~3x) of the inner shell relative to central hot-spot designs on the National Ignition Facility means that the standard fill-tube geometry represents a significantly larger perturbation. To mitigate this risk, we devised and tested with simulations a new fuel-filling scheme. This scheme consists of a sub-micrometer “peek” hole through the inner shell that allows fuel filling of the inner shell once the annular region between the two shells is allowed to become an effective fuel reservoir. The only remaining fill tube in this scheme is one that penetrates the outer shell. Figure 2 shows the results of simulations comparing a conventional fill-tube geometry with the new peek-hole concept, showing more robustness with the latter design. This study could help inform the options available for fuel filling should a sponsored NNSA program move ahead with a double-shell effort.

Figure 2. Material and density plot of imploded double shell at time of peak neutron production that fails to ignite using standard National Ignition Facility fill-tube geometry with penetration of both shells (a). Peek-hole-only simulation with peek-hole diameter of 500 μm, giving about 85% of the one-dimensional yield (b).

The completed research meets the charter of the U.S. DOE's Report to Congress (November 2012), entitled “NNSA’s Path Forward to Achieving Ignition in the Inertial Confinement Fusion Program,” where a three-year plan for a path forward explicitly calls out “exploring alternative indirect drive approaches,” such as double shells. This research area strategically positions LLNL to meet this charter in the pursuit of fusion ignition at the National Ignition Facility. The completed research sustains a core competency of nuclear and isotopic science and technology through the development of a high-atomic-number target ignition platform, and meets the imperative of long-range mission-directed research in the areas of energy and climate, and stockpile stewardship. Developing and advancing the methods of double-shell target design sustains all of these core competencies.

A three-year LDRD-supported investigation into improving and transforming double-shell target designs for eventual application to inertial fusion energy has identified challenges and potential solutions and made transformative advances in realizing double shells as a potentially viable inertial fusion energy target. An identified challenge with former double-shell target designs is delivering fuel to the inside of the inner shell without incurring large hydrodynamic instability growth from deviations from perfect spherical symmetry. We determined a solution whereby a peek hole of diameter less than 1 μm allows for fuel filling from the intra-shell annulus via a fill-tube through the outer shell only. State-of-the-art radiation-hydrodynamic simulations confirmed that this scheme could be a viable option for demonstrating ignition at the National Ignition Facility and eventual applications in inertial fusion energy. We further devised a new scheme that could lead to nearly 50% improved coupling efficiency from the outer shell to the inner shell using a high-atomic-number flyer plate on the inside of the outer shell. This design improvement could lead to more robust ignition thresholds on advanced high-power lasers such as the National Ignition Facility, and reduced requirements on the laser driver for more efficient inertial fusion energy schemes.