This research project is using ultrafast shock experiments, carbon condensates recovery and analysis, and large-scale simulations to develop more accurate modeling of explosives and at the same time advance the emerging field of detonation and high-pressure synthesis science. Predicting the behavior of carbon-rich explosives under strong shock conditions advances the physics, chemistry, and material science understanding of high explosives, in support of DOE and NNSA goals and objectives in nuclear security.

Most high explosives are metastable organic chemical compounds containing an overabundance of carbon. When strongly shocked, their decomposition products consist of gaseous products such as carbon dioxide, carbon monoxide, and water, along with a significant amount of condensed carbon. These carbon condensates (such as nanometer-scale diamonds), play a major role in determining the performance of explosives and have also found extensive use in a variety of industrial and medical applications. However, their nucleation in these strongly reactive, high-pressure and high-temperature environments has never been studied. We will characterize the carbon nucleation process in carbon-rich energetic materials under shock conditions using a combination of ultrafast shock experiments, simulations, and theoretical modeling. The primary research focus will be on liquid carbon monoxide, a carbon-rich system that shares many important features with common explosives (for example, it has an oxygen balance similar to the explosive triaminotrinitrobenzene). However, liquid carbon monoxide is much more accessible to extensive experimental and computational studies that can generate fundamental, widely applicable physics and chemistry results. We will study liquid carbon monoxide using ultrafast shock experiments, carbon condensates recovery and analysis, and large-scale simulations. Our results will enable more accurate modeling of explosives, and at the same time advance the emerging field of detonation and high-pressure synthesis science.

We expect to characterize the liquid carbon monoxide response from the nonreactive regime (below 10 GPa) to full reactivity (above 20 GPa). The experimental effort will employ laser-driven ultrafast shocks, an in-house developed experimental technique for characterizing the shock response of materials on time scales up to a few nanoseconds. This tabletop technique has the advantage of high throughput in a wide range of thermodynamic conditions and has been previously applied to other energetic liquids. The principal experimental objective is to acquire extensive data on response of liquid carbon monoxide to ultrafast shocks for pressures up to at least 50 GPa. Experiments will be followed by post-shock recovery and analysis of the carbon condensates. These experimental measurements will provide both traditional shock Hugoniot results (shock velocity versus particle velocity) as well as time-dependent information on the relaxation of the system through carbon nucleation and chemical reactions towards the chemical equilibrium state. Post-shock recovery and analysis of the carbon condensates will yield information on their size, structure, composition, and morphology. Our molecular dynamics simulations will use primarily density-functional-based tight-binding methods (which provide extremely fast and accurate quantum calculations of materials) as well as density-functional theory and classical force fields. These simulations will provide a complementary picture of the carbon nucleation process in liquid carbon monoxide and its coupling with chemical reactions. Large-scale simulations will produce detailed, atomic-level complementary information on carbon nucleation in liquid carbon monoxide on the same timescale as the ultrafast shock experiments, completing the physical picture of the process. By combining these ultrafast experiments and large-scale simulations, we expect to provide for the first time a comprehensive picture of this fundamental physical process occurring in carbon-rich energetic materials and in other materials such as organic polymers, under strong shock conditions.

Our work, predicting the behavior of carbon-rich explosives under strong shock conditions, supports Lawrence Livermore's expertise in physics, chemistry, and material science of high explosives as well as the DOE and NNSA goals and objectives in nuclear security. By developing a comprehensive physical picture of carbon nucleation in shocked energetic materials, a fundamental physical process controlling carbon production and energy output in carbon-rich compounds, we will enable more accurate modeling of explosives, advancing the Laboratory’s core competency in high-performance computing, simulation, and data science. 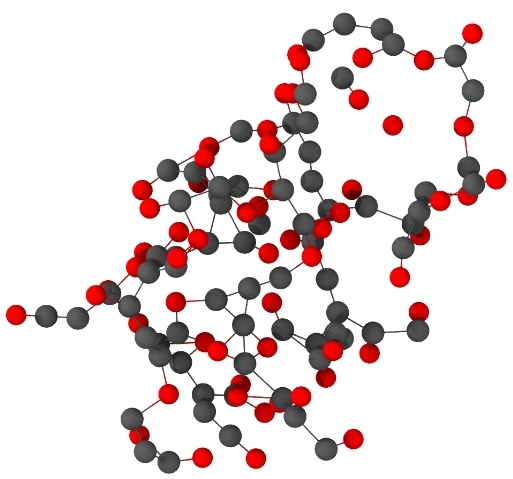 Carbon-rich energetic materials produce carbon particles under shock conditions. We are studying this process for liquid CO at the nanoscale level using experiments and simulations. Density functional theory Monte Carlo simulations of shocked CO yield carbon-rich clusters, such as the one pictured here (shocked to 20 GPa; black dots = carbon; red dots = oxygen), that we hope to compare with experiments.