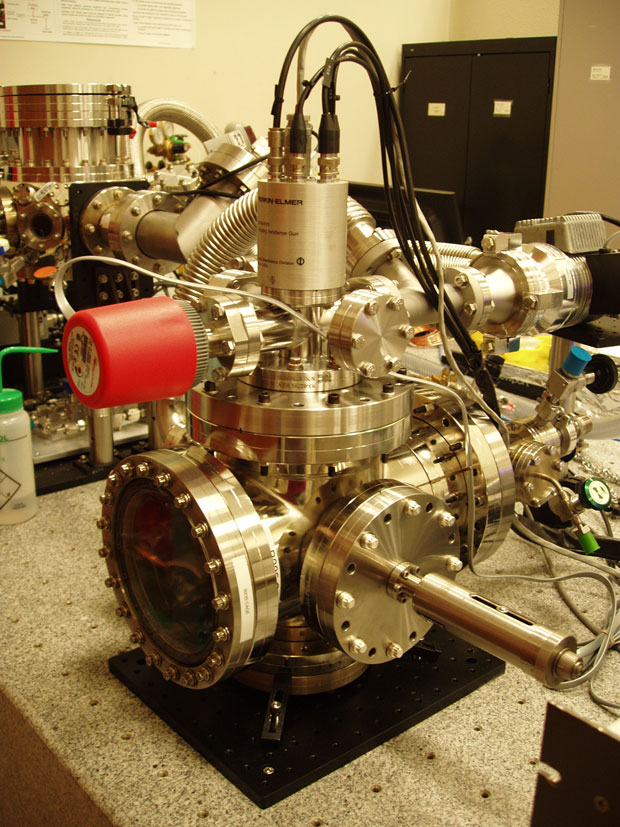 Materials containing boron are of increasing interest for use in laser targets, quantum photonics, electronics, optics, and high-temperature and reactive chemical environments. All these applications are, however, constrained by challenges arising from instabilities produced during the thermally induced fabrication process. Electron-beam-induced deposition is a rapidly developing technique that has been demonstrated for a wide range of materials, and avoids thermal- and mass-transport-related instabilities by overcoming the activation barrier for material deposition by electron-induced dissociation of adsorbed precursor molecules. We plan to determine the feasibility of an electron-beam-induced deposition process for rapid fabrication of boron-containing films. We intend to develop an understanding of the kinetics and mechanisms of electron-beam-induced deposition of boron and boron carbide, and construct a prototype platform at Lawrence Livermore. The platform will be used to characterize boron film deposition by using a method to minimize parameters. The main challenge will be related to the optimization of film deposition rate, uniformity, and stoichiometry, which are a function of the substrate temperature, precursor and purifying gas pressure, and electron energy and flux. We will use a parameter-minimization method to find the optimal conditions for each of these properties. The proposed technique, if feasible, could have major implications on the fabrication methodology of high-energy-density materials and Inertial Confinement Fusion ablators and, more broadly, provide a novel technique for the fabrication of boron-containing materials that are increasingly finding applications across many areas of science.

Electron-beam-induced deposition entails electron dissociation of precursor surface adsorbates into fragments that react with a solid surface. Deposition occurs when the reaction products are nonvolatile, resulting in the addition of surface material comprised of precursor molecule constituents. The technique is typically performed at or close to room temperature by injecting a precursor gas into a high-vacuum chamber, while a substrate is irradiated by an energetic electron beam. The process has major advantages over thermal chemical-vapor-deposition processes, including that the substrate is not exposed to the elevated temperatures required for thermal decomposition of precursor molecules. Exposure to high temperatures leads to the development of undesirable stresses, often resulting in film cracking and delamination. Other critical hurdles in fabrication of thick, continuous boron and boron carbide films are typically slow growth rates and control of film stoichiometry and surface roughness. We have identified trimethyl borate as an ideal starting point for research in the area of low-toxicity precursors. Trimethyl borate has similar structural properties to the tetraethyl orthosilicate precursor that has been well-studied in electron-beam-induced deposition of silica films. We intend to perform experiments to determine the feasibility of this precursor to fabricate boron-containing films with desirable properties. If successful, we expect to demonstrate the feasibility of electron-beam-assisted deposition of boron and boron carbide films with control over stoichiometry, density, surface roughness, crystallinity, and deposition rate. This will provide a novel method that is scalable to rapid fabrication of boron-based ablators for Inertial Confinement Fusion and high-energy-density targets. These boron materials will also be valuable to the general scientific community, with boron films and structures increasingly being explored for their optical, mechanical, and chemical properties. Also importantly, this process, if feasible, could provide a new fabrication technique for the Laboratory. Fabrication of films including carbon, silicon carbide, silicates, and various metals could be explored with the same instrumentation with a simple change of the precursor source.

This feasibility study could result in the development of a novel method for the deposition of boron materials in support of the Laboratory's core competency in advanced materials and manufacturing to tackle the scientific and engineering challenges of accelerating the design, fundamental understanding, and deployment of new materials and manufacturing processes. The work also is relevant to the mission focus area of stockpile stewardship science by providing new materials for high-energy-density research.

Our large-area, gas-mediated electron-beam-induced deposition platform for boron film fabrication. During processing, electrons dissociate surface-adsorbed boron containing precursor molecules, resulting in addition of boron material to the substrate surface. By using electrons instead of conventional thermal dissociation mechanisms such as laser-based heating, thermal stresses can be avoided in the resulting structures.