We are developing a tool that utilizes the physical coupling between seismic and electromagnetic phenomena in porous media to detect and visualize sub-surface fluid flow. This project will provide new applications of seismic-electromagnetic effects to practical subsurface imaging problems for energy services and environmental site characterization.

Seismic-electromagnetic effects are related to pore-fluid movements with respect to the solid grains. By analyzing coupled porous elastic seismic and electromagnetic signals we expect to capture pore-scale behavior and access both structural and fluid properties. Using this new method, we expect to solve the forward and inverse problems to model seismic-electromagnetic effects in porous media. For the forward problem (the fully coupled seismic and electromagnetic system), we will use a spectral-element finite-element method to solve coupled wave equations (specifically, porous elastic-wave equations, which describe the behavior of fluid-saturated porous media, and Maxwell’s electromagnetic wave equations). For the inverse problem, we will use an adjoint-tomography method for obtaining imaging and characterization of the subsurface. The adjoint approach has been implemented for a porous elastic seismic wave system and validated with a synthetic study of carbon dioxide sequestration monitoring. Adding electromagnetic measurements will add crucial constraints on the movement of the fluid phase. This approach will improve our understanding of seismic-electromagnetic effects and demonstrate their potential for constraining the properties of solids and fluids in the subsurface. Our approach offers a new method to map fluid-saturated fracture network, with applications to practical subsurface imaging problems.

This project supports DOE's science and energy objective to deliver scientific discoveries and tools that transform our understanding of nature and strengthen the connection between advances in science and technology innovation. It also supports the Laboratory's Earth and atmospheric science core competency and the energy and climate security research and development challenge by providing a new technique for monitoring fluid transport and fracture-network detection relevant to geophysics, energy exploration and extraction, and carbon dioxide sequestration. 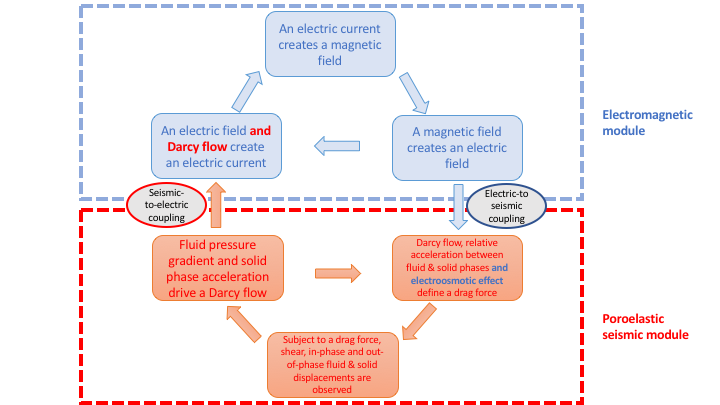 Schematic representation of the fully coupled poroelastic seismic and electromagnetic systems, enabling seismic-to-electric and electric-to-seismic effects. The decoupled poroelastic seismic-wave propagation module is already part of the software known as SPECFEM; it was added in 2008 by the principal investigator. The decoupled electromagnetic module has been implemented in FY17 in SPECFEM based on a viscoelastic-electromagnetic mathematical equivalence. Coupling terms to enable seismic-to-electric and electric-to-seismic effects were identified in FY17.