We are developing time-integration software that accommodates widely varying timescales commonly found in multiphysics simulations (such as atmospheric climate modeling), where cloud microphysics, fluid dynamics, and ocean currents each evolve at different rates. This research supports national missions that rely on complex simulations, such as energy and nuclear security.

The advent of exascale computing systems will enable simulations to create far larger and more complex models than ever before. As a result, scientific simulations (such as in climate, combustion, power-grid, and hydrological sciences) will include more physics, resulting in a growing number of changing timescales. Widely varying timescales are common in multiphysics problems, such as atmospheric climate modeling, where cloud microphysics, fluid dynamics, and ocean currents each evolve at different rates. Timescales can also differ significantly within a single physics discipline. For example, in combustion, timescales can span femtoseconds to seconds. Currently, methods are lacking for these multiple-rate problems. By focusing work where it is needed the most, multirate time integrators have shown three-fold to tenfold increases in speed on model problems in the literature. To meet the needs of increasingly multiscale simulations arising from opportunities of exascale computing, we are developing multirate numerical time integrators targeted at problems of interest to the DOE. These methods will be developed as prototypes with an eye toward future inclusion into the SUNDIALS software library of time integrators for differential equations. We will establish a stability-and-accuracy theory for candidate schemes and develop effective timescale-partitioning methods in tandem with parallelization strategies. Our prototype implementations will aid in later development of a general-purpose software package. Finally, we will test our multirate integrators in combustion and multiphysics climate simulations.

Serial implementations of multirate time integrators have shown significant speedups over single-rate integrators on a variety of benchmark cases. We expect to extend efficiency benefits of such methods to parallel multi-timescale applications, such as combustion, that suffer from a single-rate integrator, slowing solution of an entire problem to ensure accuracy of a small number of variables. Specific objectives include focusing on identification and development of explicit, implicit, and mixed explicit and implicit multirate integrators for both problems with multiple processes (each with its own timescale) operating on a common set of unknowns (additive processes), and problems with unknowns that evolve at differing timescales (variable partitioned processes). The work will build upon established methods to complete stability analysis and derive methods where needed. In addition, we will develop time-step selection and parallel partitioning methods. The work will leverage weak coupling in the system through error estimation, dependence graph analysis, and sensitivity monitoring. Our work will result in prototype codes that will inform software design needs in a common infrastructure for implementations of diverse multirate integrators. Our methods will also bring robustness to multiphysics applications, such as climate, which currently use more ad hoc methods. Implementation of prototype software will make multirate methods accessible to large-scale problems, for which there is currently only limited adoption, and set up future inclusion of multirate schemes into the SUNDIALS integrator suite.

This research supports the NNSA goal of advancing the scientific, technological, and engineering competencies. Specifically, we are enhancing the Lawrence Livermore National Laboratory’s core competency in high-performance computing, simulation, and data science by elucidating temporal discretization and multiple-scale and multiphysics methods, including methods to increase fidelity while focusing on accurate coupling between scale. Additionally, our effort in multi-rate time integrators will result in a suite of methods adaptable to efficient implementation on exascale computer systems and ensure robust coupling between timescales. Our work will also support the Laboratory's energy and climate security strategic focus area by providing more-efficient time integration in simulations of combustion and atmospheric climate. 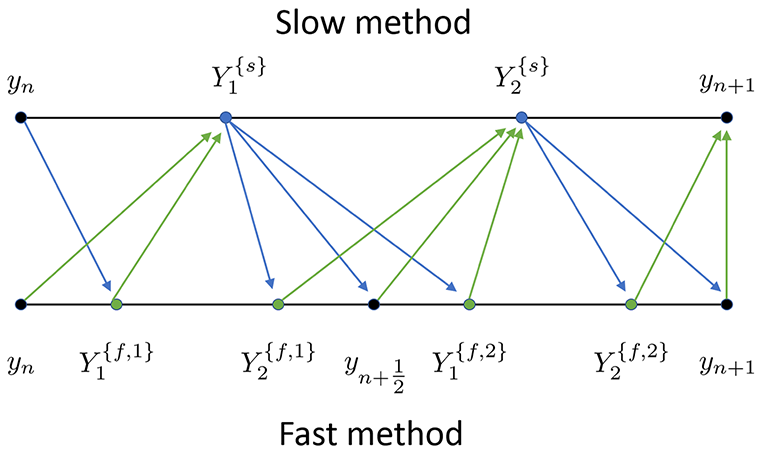 A new method developed in this project that applies approaches for both slow and fast rate components of a two-rate problem to advance the full solution from time tn to time tn+1 while maintaining second-order accuracy of the overall solution. Two fast steps per slow step are depicted. In each method, there are two intermediate-stage solutions: Y1{s} and Y2{s} for the slow method, and Y1{f,1} and Y2{f,2} for the first step of the fast method, per time step. Four stage solutions for the fast method and two for the slow method are depicted. In general, the ratio of the number of fast steps to slow steps would be higher than two. This method was developed to more evenly spread coupling between fast and slow components over the full step, while keeping computational costs low.
&nbsp &nbsp