Our project focused on the simulation of polycrystals using discrete dislocation dynamics. The objective was to extend dislocation dynamics from single crystals to polycrystals through the integration and coupling of Green’s functions methods with finite element solution methods for generalized elastic-plastic continua. DDLab, a prototype code and testbed for dislocation dynamics (written using the MATLAB scripting language) was used to test solution-coupling strategies and verify that the proposed solution methods were valid. While not all of the goals of the project were met, many of them were, and the results of the work clearly point toward directions that will enable an elegant solution to this problem in the future.

The Parallel Dislocation Simulator code we developed at Lawrence Livermore National Laboratory has become the standard dislocation-dynamics simulation tool used in materials science to study the fundamental mechanisms of plasticity. The success of the Parallel Dislocation Simulator has been achieved by introducing many innovations such as a non-singular continuum theory of dislocations, discrete topological operations, dynamic load balancing, and implicit time-integration, among others. These innovations did not exist in the first version of the code; they were added to the second version of the simulator in 2004. These innovations were made possible through development of a simplified prototype code, DDLab.

The DDLab code was written in MATLAB scripts, allowing many of the algorithms to be iteratively improved quickly, deployed to Parallel Dislocation Simulator, and finally cross-checked with DDLab. We proposed to develop a new prototype reference dislocation dynamics code, FEDDLab, which would be capable of modeling simple multi-crystal geometries. Currently, dislocation dynamics codes are relegated to single-crystal simulations; polycrystalline simulations have not been possible. We proposed to use the DDLab tool to investigate the deformation properties of polycrystalline metals to predict their behavior from the fundamental defect interactions that control them. This would enable us to predict the mechanical performance of materials under conditions that are difficult to reach experimentally, as well as predict the behavior of novel microstructures before they are even fabricated. We proposed to build a prototype code using the MATLAB scripting language to develop the algorithms required to perform such complex multi-defect simulations with the intent of porting it to the ParaDiS code base to enable simulations on exascale computers.

We expect the proposed simulation tool would help elucidate the extent to which grain-refinement strategies can be used to strengthen polycrystals, how polycrystalline microstructures could be tailored to obtain the greatest benefits of grain refinement, and understand the role that grain refinement and grain texture may play in metals subjected to dynamic loading instead of quasi-static loading, where most data on grain-refinement strengthening exists. The tool would have applications in advanced materials research by improving the predicted strength of metals under dynamic loading conditions difficult to achieve in laboratory environments. The simulation capability could also be used to predict the performance of additively manufactured metals to guide the conditions of their manufacture. The finite-domain version of dislocation dynamics requires a coupling of the dislocation dynamics method with a finite element to correct the infinite force fields in bounded domains. Apart from being used as a reference for the more powerful ParaDiS code, our simulation tool would be used to investigate the mechanisms of grain-boundary dislocation interactions such as grain-boundary sliding, dislocation transmission, and dislocation dissolution in accommodating plastic relaxation of polycrystalline metals under load. Furthermore, the code would be used to investigate the unit mechanisms of strain accommodation at grain-boundary triple lines and probe the extent to which defect elasticity is able to predict the outcomes of grain-boundary dislocation triple-line intersections. These small-scale simulations will enable grain-refinement techniques for strengthening polycrystals.

In FY17, we proposed to (1) implement simple polycrystalline geometries within the DDLab code framework to investigate the quality of the coupled Green’s function and finite-element method solution methods for elastically anisotropic crystals; (2) develop and implement a simple finite-element code within MATLAB, integrate that code with the existing DDLab code, and implement the quasi-analytical expressions for the forces between dislocations in the same material grain and in neighboring grains; and (3) conduct a test of the quality of our solution using isotropic elastic routines and comparing the coupled Green’s function and finite-element method solution with a Green’s function reference solution.

By the end of FY2017 many of the goals established at the beginning of the year were accomplished, but a full-fledged prototype discrete polycrystal plasticity code was not completed. A simple elastic-plastic finite-element code for crystalline materials was written using the MATLAB scripting language. The finite-element code enabled the definition of arbitrary crystalline orientations to be defined within an element and enabled a full 6x6 anisotropic elastic-constant matrix to be defined. The finite-element code facilitated the definition of traction-displacement conditions to be specified on the boundary surfaces of the system, but not periodic boundary conditions. Simple test-boundary value problems were conducted, such as constant-displacement boundary conditions with and without compensating internal plasticity, constant-traction conditions with and without internal plasticity, and point-force (Green’s function) tests to ensure that the finite-element routines' behavior were mathematically correct.

The simplest way to remove this contribution to the stress field is to use the analytical equations derived from the Green’s function for the stress at a point due to a dislocation segment and show that the integration of those stresses using common numerical quadrature techniques leads to a finite-element solution that balances the internal nodal forces, and balances the forces at surface nodes with the integrated tractions across those surfaces. A test problem was constructed to see if this stress-subtraction method would work by placing a dislocation loop inside a regular finite-element mesh. The force vectors at the finite-element nodes near the dislocation loop (Figure 1) show a large imbalance in the forces, indicating that the numerically integrated stresses do not yield an equilibrium solution as resolved on the finite-element grid. 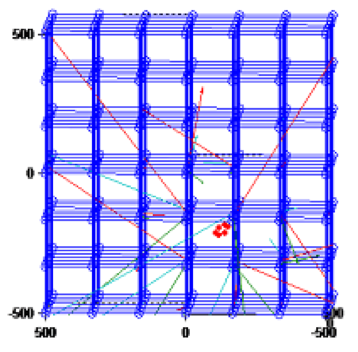 The best solution to this problem would be to analytically integrate the stress field to obtain the forces on the finite-element nodes, but such volume integrals of the stresses due to dislocations do not currently exist. The next best solution is to use the surface integral expressions that were used to balance the forces on the surface of the mesh on all of the interior surfaces of the mesh. That method is guaranteed to yield a solution where the equilibrium of the mesh is satisfied, at which point an inverse problem could be solved to find the stresses at the material points.

To bring this work to conclusion, and make the current code a fully functioning discrete plasticity code for polycrystals, the update algorithm needs to be implemented. The most complicated part of the update is the part that calculates the forces on the dislocations due to the stress fields described by both the Green’s function components and finite element components. The motion of the dislocation in response to those forces would be handled in the same manner it is now within the existing dislocation dynamic framework, and the work done to date would be used to initialize the next step and properly partition the stress field.