Melting and freezing cause tremendous and fundamental changes in a material's response to external forces. For multicomponent materials, the dynamic process of crossing the melting transition can drive rapid chemical separation between solid and liquid phases, leading to undesirable hydrodynamic behavior. From a fundamental science perspective, the melting transition in planetary materials is extremely important because it plays a major role in determining whether an extrasolar planet could be habitable. Our objective is to improve our knowledge of the melting transition in planetary materials at extreme pressures and temperatures. We will also determine the effect of kinetics on our measurements by performing experiments on two platforms that sample widely disparate timescales: the laser shock platform at University of Rochester's OMEGA laser facility in New York and the gas gun platform at the Argonne National Laboratory in Illinois.

By the end of this project we expect to be able to determine if an extrasolar planet with a mass between one and ten Earth masses (a "super-Earth") could have a liquid metal core and if it will solidify from the center. Both of these criteria are requirements for generating a stable magneto-dynamo, a proposed requirement for habitability that protects life from severe radiation from the Sun and shields the atmosphere against erosion by the solar wind, as is the case for Earth. We also expect to have a significantly improved understanding of how the mantle of rocky extrasolar planets will solidify, which we will use to predict if plate tectonics are possible on super-Earths. Results from our research into the kinetics of melting and solidification would also have direct applications to equation of state and strength modeling of multicomponent materials. Many applications require an in-depth understanding of alloys and compounds at extreme pressures and temperatures, and the decades-old tools developed at Lawrence Livermore to deal with single-component materials are not applicable when dealing with complex multicomponent materials. While the materials differ in the planetary science arena, the physics remains the same.

Our research project into the time-dependent nature of melting and freezing in complex multicomponent materials is relevant to the Laboratory's high-energy-density science core competency and the stockpile stewardship science strategic focus area. The research contributes to four themes in LLNL's investment strategy: (1) increasing the fidelity of weapons physics models, (2) providing a basic understanding of how advanced manufacturing materials melt and solidify, (3) contributing to the development of experimental platforms for future weapons and complex integration experiments, and (4) providing a fundamental understanding of extreme, high-energy-density states of matter.

In FY16 we have (1) successfully performed a series of shock-melt experiments on forsterite, an iron–silicon alloy (see figure), and a shock-melt-ramp re-solidification experiment on an iron alloy—although the initial results are exceptionally promising, we need to perform further experiments because of pulse-shaping issues at the facility; (2) developed an equation-of-state model for an important magnesium silicate, and are working on developing a multiphase equation-of-state model for iron; (3) made an important discovery about the high-pressure melt curve of magnesium metasilicate; and (4) performed shock-diffraction experiments on forsterite at the Dynamic Compression Sector at Argonne National Laboratory, with promising results. 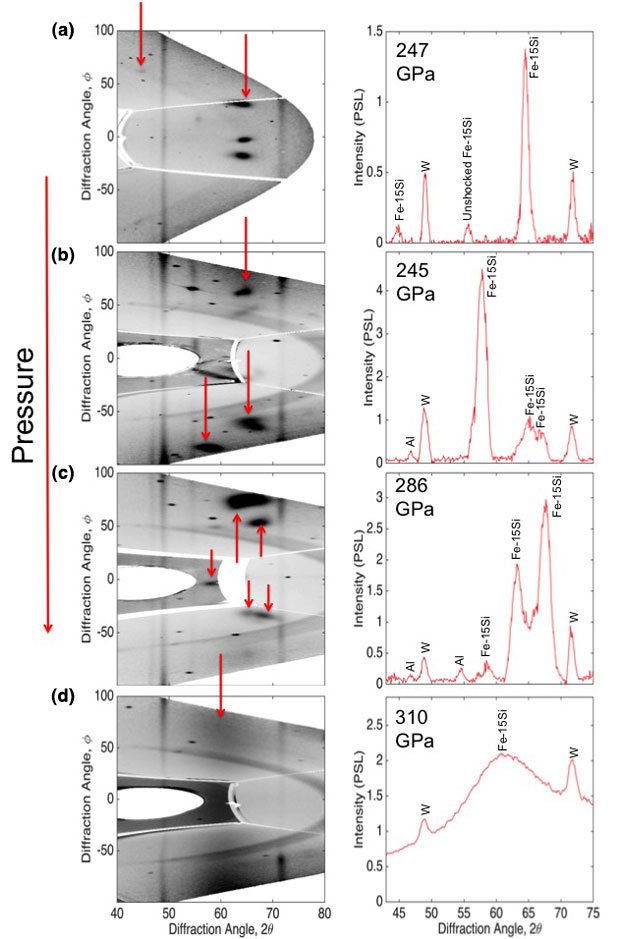