Future fusion power plants based on the deuterium–tritium fuel cycle need to create their own tritium fuel to sustain operation. To do so, lithium must be incorporated in the breeding blanket that surrounds the fusion chamber. Various lithium-containing breeding materials are possible, in either liquid (liquid metals and molten salts) or solid (typically lithium-bearing ceramics) state. The most recent inertial-fusion energy chamber concept uses liquid lithium as the tritium breeder and primary coolant for the blanket. While lithium has many attractive features, its high chemical reactivity with air, water, and other compounds poses significant engineering challenges to assure safe operation. Our objective in this project is to develop ternary liquid metal alloys with a reduced fire hazard that still meet key requirements such as maintaining a tritium breeding ratio greater than or equal to one. The research plan was based on a multiphase interdisciplinary approach including predictive analysis of the alloy phase state, detailed neutronics analyses, experimental verification of alloy melt temperature and composition, and finally experimental measurements of the tritium solubility and chemical reactivity of the most promising ternary alloys. Based on the results, a ternary alloy of lithium, tin, and zinc could be a good alternative to liquid lithium and may have some advantages over the lithium–lead binary alloy proposed in tritium breeding blankets for magnetic fusion energy. Enriching the lithium in the lithium-6 isotope is an option that would allow very low lithium content in the ternary, which is predicted, though not proven, to reduce the chemical reactivity compared to pure lithium.

The most recent concept for inertial fusion energy will produce the tritium fuel required to sustain operation via nuclear reactions within a self-cooled liquid lithium tritium-breeding blanket.1 The proposed design would capture and convert fusion neutrons born in an Inertial Confinement Fusion target to usable thermal power while closing the tritium fuel cycle.2 Neutrons streaming outwards from a burning fusion target interact with the blanket structures and liquid lithium to produce heat and tritium, which are subsequently carried away via the lithium as it exits the fusion chamber and proceeds through the power plant. Pure lithium metal generally offers the best balance of thermal, mechanical, and nuclear performance of all other breeder materials.3

Advantages of liquid lithium include its low density and resulting low hydrostatic pressures and stresses. Likewise, it has good heat transfer properties and excellent corrosion properties when impurity concentration is kept low—for example, less than 100 weight parts per million nitrogen.4 Lithium melts at 181°C and has a large spread between its melting and boiling temperatures. Its low viscosity and density and high specific heat result in a low pumping power when used as the primary coolant. Also, lithium’s affinity for hydrogen isotopes, including tritium, means that tritium permeation is less of a concern than for other liquid breeders.

Our primary objective was to develop a new ternary alloy breeder that could alleviate many of the issues associated with these binary alloys while minimally affecting other performance metrics. A ternary alloy can in principle provide the degrees of freedom needed to simultaneously meet the nuclear, thermal, and chemical requirements of the working fluid. In fact, previous work exploring lithium-based lead–bismuth ternary alloys has shown good promise for other fusion systems, but lithium-6 enrichment was required and bismuth posed availability and activation challenges.6,7

As described in the following section, additional research and development will be required in order to quantify the advantages and limitations of lithium-based ternary alloys for use in fusion tritium-breeding blankets.

The study plan was based on a multiphase interdisciplinary approach including theoretical modeling of the alloy phase diagrams, detailed neutronics analyses, experimental verification of alloy melt temperature and composition, and finally experimental measurements of the tritium solubility and chemical reactivity of the most promising ternary alloys. Results for each of these are provided below.

To be a suitable candidate, the ternary alloy must be in the liquid phase with a melt temperature that is compatible with the structural material proposed for use in the fusion chamber and primary heat transfer system. Early in the project, phenomenological thermodynamic analyses were completed using CALPHAD (calculation of phase diagrams) and the Thermo-Calc software. The initial focus was on lithium–tin–zinc ternary alloys. As an example of the type of information we developed, Figure 1 show the predicted phase diagram for the ternary lithium–tin–zinc alloy system at 673 K (400°C). Regions of liquid (L) or multiphase liquid (L1 + L2) are potentially viable. Similar plots were constructed over a temperature range of 200 to 700°C.8 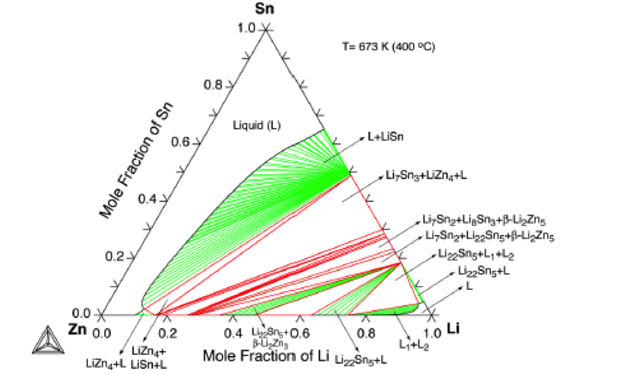 We quantified several aspects of candidate alloys including the tritium breeding ratio, energy multiplication, and neutron activation. These are all key parts of the selection criteria for the breeder.

The most important was the assessment of the tritium breeding ratio, which is the ratio of tritium atoms produced in the blanket to the tritium atoms consumed in the fusion reactions. The fusion reaction between deuterium and tritium produces an alpha particle (α) and a neutron (n). In the process, energy is released that appears in the form of kinetic energy of the alpha particle and neutron. To create tritium to provide a continuous supply of fuel, the fusion neutron must initiate nuclear reactions with lithium. Lithium has two isotopes, lithium-6 (6Li) and lithium-7 (7Li). Both isotopes have tritium- (T) producing reactions with neutrons:

Both reactions produce a new tritium atom and a helium nucleus. The reaction with lithium-7 also emits another lower-energy neutron (n') that can subsequently produce more tritium breeding reactions with lithium-6. In this way, one fusion neutron can result in more than one tritium-producing reaction and thus achieve a tritium breeding ratio greater than one. Neutron multipliers such as beryllium and lead can also be used in the blanket to enhance the ratio.

Another important output of the neutronics analyses was the energy multiplication factor defined as the ratio of the total thermal power produced to the fusion power. The ratio is typically greater than one due to exothermic nuclear reaction with lithium and other blanket material. Both lithium-6 and tin are significant contributors to the energy multiplication factor. A third nuclear performance characteristics considered was the activation of the ternary alloys because it impacts safety aspects of the plant.

The neutronics work was carried out by our collaborators from the University of California, Berkeley, and is thoroughly documented in several reports.9–12 Figure 2, an example of the type of information generated, shows a map of the regions of an acceptable tritium breeding ratio (above and to the left of the solid lines) with lines of constant energy multiplication also shown. In terms of power plant economics, the higher the energy multiplication factor, the better, subject to the requirement that the tritium breeding ratio is greater than 1 (typically 1.02–1.1 to allow for processing losses and modeling uncertainties). This indicates that, at least from a neutronics perspective, a lithium–tin–zinc alloy with as little as 15 to 20 atom% lithium could achieve a tritium breeding ratio greater than 1 and also give a relatively high energy multiplication factor (greater than 1.2) if the lithium is enriched in lithium-6. 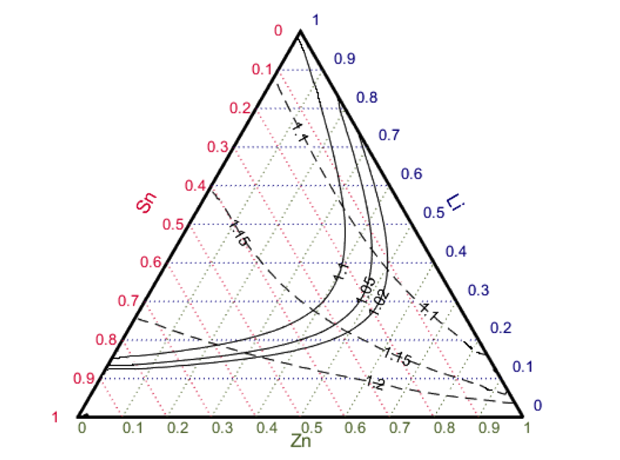 Figure 2. Lines of constant high tritium breeding ratio (solid) from 1.02 to 1.1 and lines of constant energy multiplication factor (dashed) from 1.1 to 1.2 for the lithium–tin–zinc ternary alloy system for lithium enriched to 90% in lithium-6.

Although the use of the Thermo-Calc software provided certain confidence that the liquid alloy phases will occur, the data for many elements and associated alloys simply does not exist. Thus, a critical part of our plan was the experimental measurement of the phase diagram for a wide range of candidate alloy compositions. The selected approach was to use a differential scanning calorimeter, which was placed inside a glove box backfilled with a high-purity argon atmosphere to prevent lithium reaction with air. By the end of FY15, the calorimeter was operating and initial results for a lithium–tin–zinc alloy were obtained. The work on alloy formation, alloy characterization, and the initial differential scanning calorimetric data are documented in an LLNL technical report.13

For the alloy candidate to be successfully used for a fusion power plant, it is our view that it must maintain a high tritium solubility to prevent tritium permeation and associated buildup throughout the plant. Solubility in binary alloys and eutectics like lithium–lead are known to be orders of magnitude lower than pure lithium.14 However, solubility of newly developed ternary alloys has not been explored. The research plan was to use both a differential scanning calorimeter and Sieverts apparatus to measure hydrogen solubility in selected alloys. Because of equipment issues with the differential scanning calorimeter, we began to focus on the design of a Sieverts apparatus. To that end, we documented the proposed design of such an apparatus, including an option that uses differential pressure measurements for higher sensitivity.15

The next step would be to down-select a few top candidates based on the phase diagrams and neutronics results and conduct experiments to determine the chemical reactivity with air and water. The background planning information for such experiments are documented in a University of California, Berkeley, report.16

All of the factors discussed above provide input to the selection of the best alternative ternary alloy. As part of our work, we developed a methodology to combine a variety of factors to score the candidates. The criteria included tritium breeding ratio, energy multiplication factor, chemical reactivity, melt temperature, tritium inventory, power handling, material cost, and material abundance. The rating methodology and preliminary results are documented in an LLNL technical report.17 Completion of the experimental validation of phases, tritium solubility, and chemical reactivity are required to refine the results and lend them credibility.

Developing new underpinning technologies for fusion energy science and technology is one of the Laboratory’s strategic priorities, and primary coolant reactivity has been identified as a substantial technology risk. This research project specifically addressed concerns in fusion safety and performances by striving to mitigate this risk by developing and studying a lithium-alloy tritium breeder that maintains performance while reducing chemical reactivity of direct lithium metal. Developing new alloys is also relevant to the Laboratory’s core competency in advanced materials and manufacturing.

This project explored various aspects of lithium-based, ternary liquid alloys for use in fusion breeding blankets. Our goal was to discover and quantify characteristics of new breeder material with the potential for improved performance compared to the liquid lithium proposed for inertial fusion energy and, in a broader perspective, the lithium–lead alloy proposed for magnetic fusion energy. Based on the work to date, we concluded that a lithium–tin–zinc alloy enriched in lithium-6 will have excellent tritium breeding and energy multiplication performance. The small fraction of lithium required (with as little as 15 to 20 atom% lithium) suggests that the chemical reactivity will be significantly lower than pure lithium, but this requires experimental validation, including experimental measurements of the melt temperature and tritium solubility, which would be the logical next steps in this process.