We are measuring the thermal conductivity of dynamically compressed materials to gain an accurate measurement of this property, which has direct relevance for the Earth’s mantle and core temperature, magnetic field, and interior evolution. It also plays a limiting role in supercooled solidification kinetics and morphology and is important for Inertial Confinement Fusion modeling efforts.

Thermal conductivity is of great importance to the geoscience community because it plays a key role in planetary models and has direct implications to our understanding of how the Earth’s magnetic field is powered. Experimentally, thermal conductivity of the Earth’s core remains poorly constrained because of the extreme difficulty in making thermal transport measurements under the relevant pressure and temperature conditions. Thermal conductivity is also relevant to Lawrence Livermore’s mission in that thermal transport plays a limiting role in supercooled solidification kinetics and morphology, and is a key property in Inertial Confinement Fusion modeling efforts. Thermal conductivity is a rate-limiting parameter for crystallization under rapid compression. We expect to measure the thermal conductivity of iron at Earth core conditions using plasma-piston ramp-compression techniques that have been developed in recent years on the Janus and OMEGA lasers. Ramp compression produces less dissipative heating, thus enabling higher compression and lower temperature than shock compression. Ramp-compression equation-of-state and x-ray diffraction measurements on iron to terapascal pressures have confirmed a “cool” quasi-isentropic compression path in which the sample remains in the solid state at peak compression. In contrast to the tendency for the ramp compression waves to steepen with time (because of the pressure-dependent increase in sound speed), the propagating thermal wave is characterized by a rise time that increases and a peak temperature that decreases with time. In our experiments, the thermal emission at an iron and sapphire interface, integrated over a 350- to 900-nm spectral window, will be resolved as a function of time and one-dimensional space across the iron steps with the National Ignition Facility or OMEGA streaked optical pyrometer diagnostic. A preliminary analysis of our data will use two observables for determining thermal transit times from which we can then constrain the thermal conductivity. The data we obtain will directly inform Earth interior models.

Thermal conductivity plays a key role in the shell-capsule fuel mix within Inertial Confinement Fusion studies. The experimental and analysis techniques we are developing will open the possibility of making new types of heat transport measurements using high-powered lasers, and is relevant to the Laboratory’s core competency in high-energy-density science as well as the core competency of Earth and atmospheric science. Applications to Inertial Confinement Fusion also supports DOE’s goal for a more economically competitive, environmentally responsible, secure, and resilient U.S. energy infrastructure. 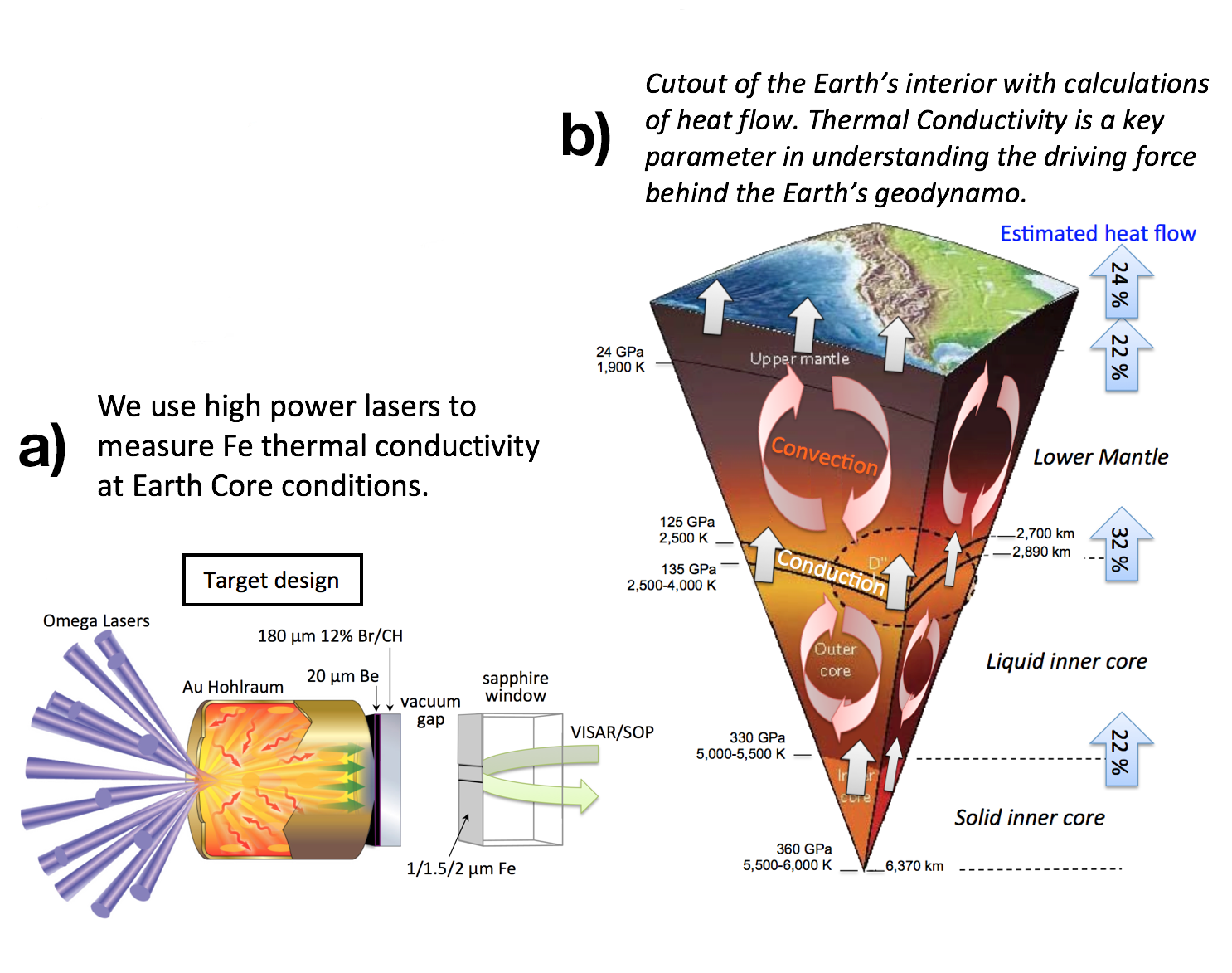 Using the high-powered OMEGA laser facility and our target design, we are measuring iron thermal conductivity at conditions equivalent to those found at the Earth's core. (a) Our target design, showing the gold (Au) hohlraum and the iron (Fe) and sapphire interface with a velocity interferometer (VISAR) and streaked optical pyrometer (SOP). (b) Cutout of Earth's interior with calculations of heat flow. Thermal conductivity is a key parameter in understanding the driving force behind the Earth's geodynamo.