Certain important diagnostic and communication applications receive faint electrical signals that must be transmitted over long distances for capture. Optical links reduce bandwidth and distance restrictions of metal transmission lines. However, such signals are only weakly imprinted onto the optical carrier, resulting in low fidelity transmission. Increasing signal fidelity often necessitates insertion of radio-frequency amplifiers before the electro-optic modulator, but (especially at high frequencies) such amplification results in large irreversible distortions. We have investigated the feasibility of a sensitive and linear modulation by optical nonlinearity (SALMON) modulator to supersede radio-frequency-amplified modulators. SALMON uses cross-phase modulation to enhance the modulation depth of an radio-frequency-modulated optical wave. This ultrafast process has the potential to result in less irreversible distortions as compared to a radio-frequency-amplified modulator. Using the SALMON modulator, we demonstrated a sensitivity enhancement factor greater than 20 and significantly reduced distortion, proving it a feasible alternative to a radio-frequency-amplified modulator.

Many diagnostic and communication systems, such as cellular telephone networks and radar, receive weak signals that must be amplified and remotely sent over long distances to receivers. Although optical links alleviate the bandwidth and distance restrictions of metal wires for transmission to receivers, weak signals are unable to fully modulate an optical wave, resulting in poor dynamic range. Radio-frequency amplifiers are commonly employed before electro-optic modulators. The resultant radio-frequency-amplified modulators increase modulation for fiber optic delivery but severely degrade fidelity.

We found that the SALMON modulator can achieve sensitivity enhancements greater than 20 times while exhibiting less irreversible distortion, and we also investigated its impact on noise. For this study, we experimentally quantified the sensitivity enhancement, distortion, and noise of a conventional modulator and our SALMON modulator with an experimental test bed. We also created a physics-based end-to-end model to evaluate and optimize experiments.

For our modeling effort, we calculated the relationship between voltage into an electro-optic modulator and voltage out of the photodetector for a general optical link.1 When an electro-optic modulator is fed by a carrier laser and input radio-frequency voltage VRF,in and subsequently identified with the photodetector, the output voltage VRF,out is related to system parameters by

where Pcar is the carrier laser power, RLis the photodetector load resistance, Resp is the photodetector responsiveness, and Vπ is the half-wave voltage of the electro-optic modulator. There are practical limits to the values of the quantities in the parentheses, so a larger output voltage necessitates amplifying the input in the radio-frequency domain, resulting in the aforementioned distortion and fidelity reduction.

It is important to note that in Mach–Zehnder modulators (commonly used for controlling the amplitude of an optical wave), the input voltage results in a modulator phase, and at the end of the link results in a detected voltage. Any increase in the modulator phase results in a larger voltage identified with a photodetector. Examining the phase alone allows one to isolate the electro-optic modulator’s properties independent of the rest of the optical link (e.g., the photodetector and carrier laser).

We measured the strength of the sensitivity enhancement factor as a function of optical power of this SALMON modulator, which uses a highly nonlinear fiber as the cross-phase modulation stage (see Figure 1). Sensitivity enhancement was calculated by measuring the modulation depth with and without the cross-phase modulation stage. The model we created predicts a linear relationship between sensitivity enhancement and pump laser power. Our cross-phase modulation stage was a telecommunications wavelength (1.5-μm) highly nonlinear fiber (Sumitomo Electric), a silica optical fiber whose specialty is to strongly confine the optical field to increase the nonlinearity, and as a result has a nonlinear coefficient γ = 30 x 10-3/W⋅m and length L = 103m. Given the fit in Figure 1 of X = (22/W)Ppump, this implies K = 0.37. The deviation of K from 1 is likely due to a drop in the cross-phase modulation strength from ideality because of walk-off of the relative polarizations of the pump and carrier waves throughout the highly nonlinear fiber, pump loss along the fiber, and pump-carrier group velocity dispersion. Experiment-to-experiment differences in sensitivity enhancement factor could be caused by pump and signal polarization drift over time due to environmental fluctuations. The great agreement between theory and experiment lends strong credence to the origin of the observations, and also shows the ability to engineer the amplification strength. 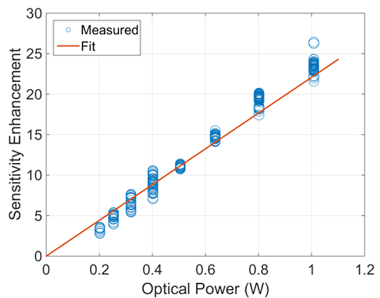 Figure 2. Two-dimensional distribution of input modulation phase versus deviation of modulation phase from input for electronic signal amplifiers. In these plots, noise manifests as the thickness of the distribution, whereas irreversible distortions scale with area inside hysteresis loops. (a) Using a radio-frequency amplifier results in large distortion. (b) Using a cross-phase modulation amplifier results in no visible distortion. Although in this first demonstration using cross-phase modulation exhibits larger noise, the total error is significantly reduced.

Through this work, the Laboratory gained a unique modulator technology for high-fidelity capture of weak signals. In addition, this addresses a pressing need for the Department of Defense's Defense Advanced Research Projects Agency: higher sensitivity for radar applications. Electronic warfare requires the best performance possible. However, weak signals are often lost in a sea of noise, as well as jamming signals and their distortions. The SALMON modulator has the potential to provide the increase in sensitivity necessary for these applications.

Many high-speed temporal diagnostics of advanced fusion-class lasers, laser target-chamber dynamics, and weapons tests require detection of weak radio-frequency signals that must be sent over long distances to protect valuable hardware from damage. A new electro-optic modulator technology for delivery of these signals would enable both high sensitivity and fidelity in support of the Laboratory’s core competencies in lasers and optical materials science and technology and high-energy-density science.

We determined that the SALMON modulator has passed the test of feasibility—that is, it exhibited sensitivity enhancement greater than 10 (actually >20) and had significantly lower distortions than a state-of-the-art radio-frequency amplifier. These results are very promising for the future deployment of this class of modulators in an array of applications. However, this study also raised a question about its noise performance. Although the SALMON modulator clearly outperformed a high-performance radio-frequency-amplified modulator, its performance could potentially be significantly improved. Further work is needed to ascertain the source of the additional noise in this modulator to determine whether the noise can be mitigated. In addition, there is a very large and rich parameter area to explore to further optimize the performance of SALMON modulators, including, but not limited to, choice of optical wavelength and highly nonlinear fiber (which influences nonlinearity and dispersion).