We are developing the scientific and statistical basis for forensic analyses based on genetically variant peptides from various human tissue types, and extending the concept to other forensic and intelligence contexts. This research addresses major gaps in forensic science and will also impact the fields of biological archeology and proteomics.

Traditional mainstays of forensic science that depend on qualitative expert opinion such as hair and fingerprint analysis are being challenged regularly as lacking a scientific and statistical basis. These challenges, leading to questions of the admissibility of this type of evidence in current cases and the validity of previous convictions, are potentially leading to a state of crisis in forensics. The shortcomings of these qualitative methods not only undermine an important element of the criminal justice system, but also increase resistance to their use in the broader national security community. The deoxyribonucleic acid (DNA) typing methodology stands out as an exception, but its use is limited when the sample has degraded or when there are multiple contributors. Protein can serve as a surrogate for DNA in these cases and provide an alternative quantifiable analysis strategy. Furthermore, genetically useful information can be obtained from genetically variant peptides extracted from protein samples. We plan to develop the scientific and statistical basis for forensic use of analyses based on genetically variant peptides and extend the concept to other forensic and intelligence contexts. We will focus on the tissue types and quantities commonly found at crime scenes and develop sample preparation and analytical methods to detect variation in the form of genetically variant peptides. The project has three broad objectives: (1) enable human identification from a single hair, (2) develop techniques for other forensically relevant tissue sources, and (3) exploit next-generation sequencing to obtain unique and specific peptides to track individuals and resolve complex mixtures. Addressing each of these objectives will incorporate automated processes that are compatible with microscopic- and nanometer-scale fluidic sample handling and analysis, and will require the development of novel bioinformatic and biostatistical methodologies. The methods we develop will also significantly impact biological archeology by providing biogeographic information or sex determination for samples that no longer contain usable DNA for these purposes. We will further develop strategies to track individuals, even against a complex background of many individuals, using genetically variant peptides related to ultra-rare variants.

Forensic science is currently under intense scrutiny, particularly regarding hair and fiber analysis, related to the reliability of subjective expert-witness testimony. Our research will directly address this issue by providing quantifiable analysis of hair, teeth, and bone evidence to replace subjective methods. By focusing on the tissue types commonly found at crime scenes, we will add protein typing as a scientific and statistically rigorous forensic tool. We expect to establish the technical foundation for using proteins as a source of information for human identification. Expected results include (1) integrating measures of identity based on genetically variant peptides and DNA; (2) developing a biogeographic prediction algorithm; (3) developing methods to identify, characterize, and validate genetically variant peptides expressed in bone and teeth, and evidenced in palm prints and fingerprints; (4) developing a methodology to identify sex-specific peptides; (5) identifying unique or rare genetically variant peptides in hair and palms; and (6) developing a workflow for identifying unique or rare DNA sequence variations (single-nucleotide polymorphisms) that occur commonly within a given population.

This effort will provide a scientific and statistically validated methodology that will impact the fields of forensics, biological archeology, and proteomics, in support of the DOE goal in science and energy to deliver scientific discoveries and major scientific tools that transform our understanding of nature and strengthen the connection between advances in fundamental science and technology innovation. Our research directly addresses gaps in forensic science that have been nationally highlighted and acknowledged, and supports and expands LLNL core competencies in bioscience and bioengineering as well as forensic science, particularly with respect to providing novel forensic methods with applications in counter-proliferation, counterterrorism, and homeland security. 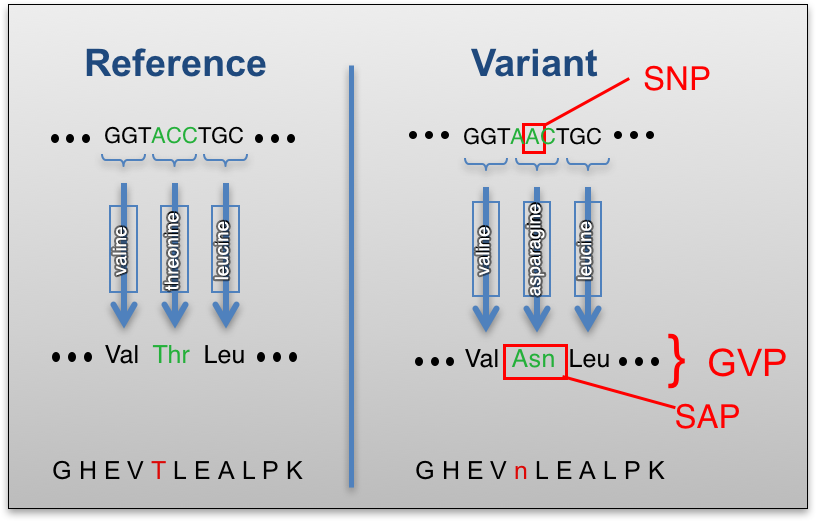 Genetically variant peptides (GVPs) are the products of single nucleotide polymorphisms (SNPs) in the genes that code for proteins. (A single nucleotide polymorphism is a DNA sequence variation occurring when a single nucleotide in the genome or other shared sequence differs between members of a species or paired chromosomes in an individual.) Because of their link to the genetic makeup of an individual and the associated variability in frequency of the SNPs, GVPs can be used for human identification when DNA is not available.