This project focuses on a scoping study and the earlier development of numerical methods for predictive simulations of the potential lethality and vulnerability of laser directed energy (DE). This requires the development of high-order implicit solvers to enable coupled fluid dynamics and thermal-structural response (solid mechanics) in a wide range of flow conditions, from low Mach to supersonic shock dynamics. The solvers must be capable of capturing relatively long-time-scale dynamics (laser DE long-time target engagement). This implicit fluid–structure interaction (FSI) capability can be used to explore local damage behavior with full system response. The project explored the recently developed reconstructed discontinuous Galerkin (rDG) method for high-order finite-element space discretization, embedded into the fully-implicit method-of-lines time discretization and the Newton–Krylov framework for solving generic conservation laws—representing a Navier–Stokes formulation for fluids and implicit solid mechanics (hydrodynamics with strength)—within the a multiphysics simulation platform. The project formulated the algorithmic and physics modeling directions needed for robust, effective, and accurate representation of the complex physics involved. The research significantly advances the general field of computational modeling in fluid–structure interactions and national-security applications by employing state-of-the-art high-fidelity portable and scalable algorithms for high-performance computing and fully coupled physics. 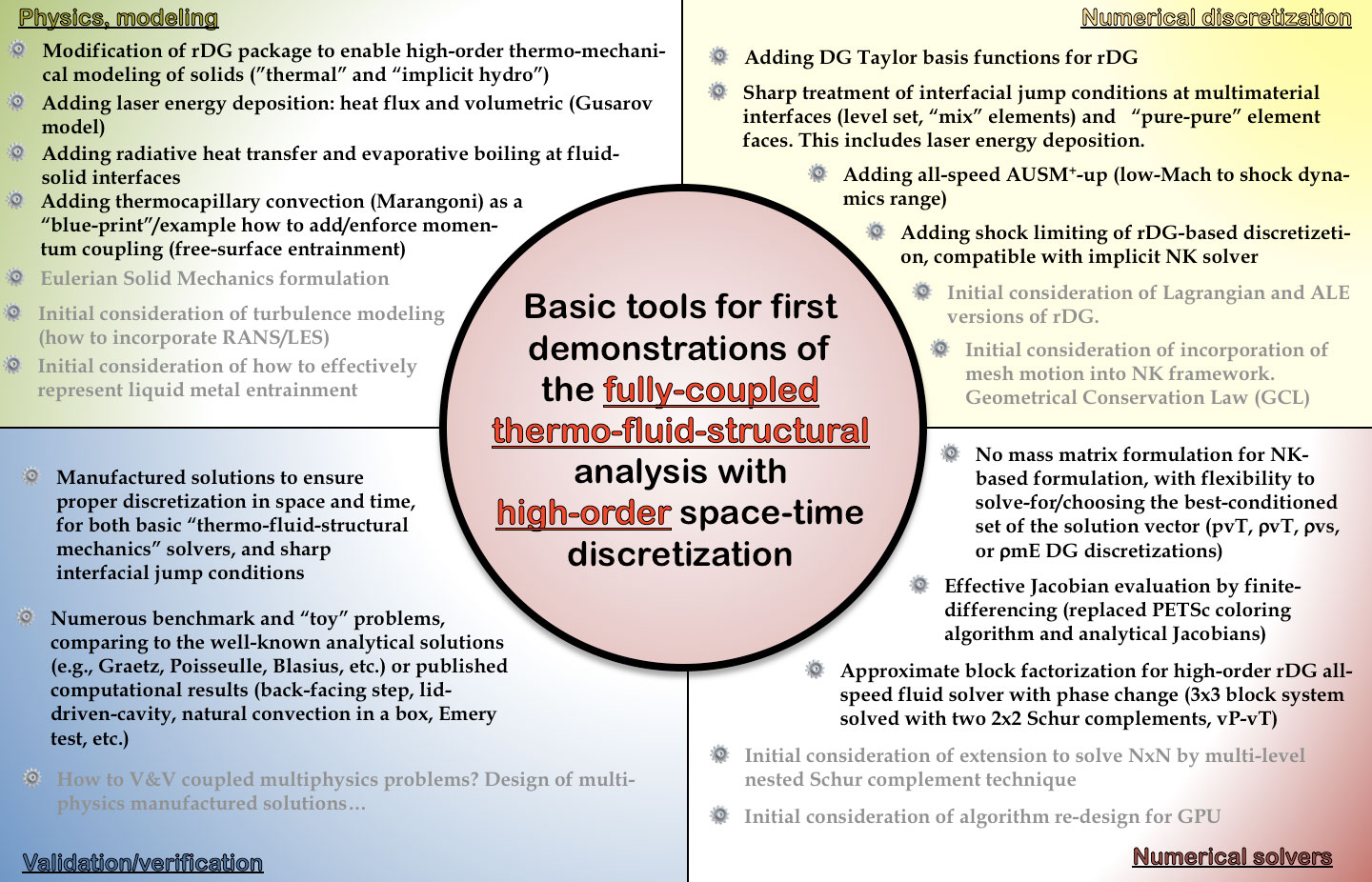 New development and sufficiently-in-depth exploration items are highlighted in bold , while the remaining issues (deemed necessary but not investigated to the same level) are shown in gray .

Many science, engineering, and potential offense and defense applications require accurate simulations of the system response and fluid-structure interactions from a laser DE encounter. Since the timescale of the laser target engagement is relatively long, the modeling approach requires an implicit formulation. Numerical algorithms with explicit time stepping result in unacceptably small time steps, owing to numerical stability restrictions, which is especially detrimental when an accurate resolution of the thermal and viscous boundary layers is required in the neighborhood of the laser target area. We are interested in the high-fidelity description of the multiphase fluid dynamics and solid mechanics in the neighborhood of the laser DE interactions, as well as the overall system response to the associated thermomechanical loading, which necessitates fully-coupled multi-physics formulations.

Commonly used uncoupled or loosely-coupled operator-splitting-based approaches do not provide satisfactory (i.e., effective, accurate, and robust) solutions. As an alternative, a formulation that is fully coupled and high order in both space and time should be used. In this project, we explored the current status of legacy multi-physics algorithms within Lawrence Livermore National Laboratory’s production-level ALE3D code and their suitability for laser DE potential lethality and vulnerability applications. We also investigated the applicability of recently developed high-order, implicit, spatiotemporal discretization using the discontinuous finite-element formulation (rDG) and L -stable method-of-lines methods, all within the tightly-coupled Newton–Krylov-based scalable, iterative method for generic conservation laws solved on unstructured meshes.

This project supports the NNSA goal to apply our science and technology to national security missions. The results of our research directly support the Laboratory’s mission focus and core competency of computational modeling. In addition to laser DE applications, a range of national security applications stand to greatly benefit from the explored fluid/structure modeling at extreme conditions, including the continuing efforts of ALE3D in advanced manufacturing and powder-bed fusion, the recently started efforts to develop high-fidelity implicit solvers for all-speed high-explosive cook-off events, and the potential for modeling aerodynamics and fluid-structure interactions in very high Mach-number flows for reentry body problems, which also require implicit discretization and related preconditioning of linear algebra to represent boundary-layer dynamics and thermostructural loadings.

As a result of the project, a number of important areas for future algorithmic- and physics-modeling developments were identified. The initial goal was to use the legacy implicit-hydro solver in ALE3D and couple it with ALE3D’s legacy thermal solver and the newly developed high-order, rDG-based fully-implicit fluid-dynamics solver. The coupling was designed to use the Jacobian-free Newton–Krylov (JFNK) methodology. We discovered that using legacy algorithms was not appropriate or effective, as some conceptual algorithmic and code-design flaws in the legacy solvers prevent effective implementation within the JFNK framework. Instead, the high-order, rDG-based solver was modified to enable modeling of both fluids and solids, and an initial demonstration of the fully-coupled simulations for laser-spot heating of solid shells, coupled with external fluid dynamics, was presented. The results have been published (Nourgaliev et al. 2018).

This approach was clearly effective and is recommended for future deployment in laser DE applications. These efforts should capitalize on the present findings.