Pulse compressors for ultrafast lasers have been identified as a technology gap in the push towards high-peak-power systems with high average power (>100 W) for industrial and scientific applications. Gratings for ultrashort-pulse (<150 fs) compressors are metallic and can absorb a significant percentage of laser energy, resulting in up to 40% energy loss and creating thermal issues that degrade on-target performance. We have developed a next-generation gold grating technology and scaled it to the petawatt size. This new design uses a deposited dielectric material for the grating ridge rather than etching directly into the glass substrate, which results in improved efficiency, uniformity, and processing as compared to previous substrate etched gratings made for high-average-power use. Average compressor powers as low as 1 W can cause distortions in the on-target beam. We have developed and tested a method of actively cooling diffraction gratings, which, in the case of gold gratings, can support a petawatt-peak-power laser with up to 600 W average power. To support this work, we demonstrated thermomechanical modeling of a grating in its use environment and benchmarked the model with experimental measurement. Multilayer dielectric (MLD) gratings are not yet used for these high-peak-power, ultrashort pulse durations due to their design challenges. We have designed and fabricated broad-bandwidth, low-dispersion MLD gratings suitable for delivering 30-fs pulses at high average power. This new grating design requires the use of a novel out-of-plane compressor, which we have modeled, designed, built, and tested. Our prototype compressor yielded a transmission of 90% averaged over 45-nm bandwidth. To evaluate gratings and compressors built in this project, we have commissioned a joule-class ultrafast Ti:Sapphire laser system. Combining the grating cooling and MLD technologies developed here could enable petawatt laser systems to operate at 50-kW average power.

Since 1996, Livermore has been a world leader in the design, development, and fabrication of meter-scale diffraction gratings for femtosecond laser systems. In fact, most energetic, ultrahigh-irradiance (≥1020 W/cm2) laser systems worldwide rely on Livermore technology. The gratings are key to achieving the highest laser irradiance and are used in the short-pulse compressor in a scheme referred to as chirped-pulse amplification. Existing petawatt chirped-pulse amplification systems typically operate in the single-shot regime. However, there is growing interest and investment in new, high-intensity laser capabilities for industrial and discovery science applications that require high-repetition-rate, laser-driven, high-brilliance, secondary sources.1–3 The main challenge to operating at high average power is thermal management in the laser amplifiers and control and mitigation of thermally induced distortions in the diffractive pulse-compression gratings.4 We have designed, developed, and demonstrated new diffraction gratings and compressors for high-energy, high-average-power ultrafast lasers by successfully accomplishing all five project objectives, as follows: (1) Develop and engineer an advanced process for fabricating broadband metallic gratings capable of operating at 300-W average power. This was completed with higher uniformity than expected and tested up to 600-W power; (2) Understand the impact on short-pulse laser performance of deposited heat in large-area gratings and implement active heat removal. This was successfully done with computational modeling and experimental benchmarking; (3) Design and develop high-average-power, high-efficiency, MLD diffraction gratings supporting 30-fs pulses or better. This was completed with the simulation, design, and fabrication of MLD gratings up to 100 mm in size; (4) Explore and develop a nonplanar pulse compressor design utilizing MLD gratings. This was completed with modeling, design, construction, and characterization of an out-of-plane compressor architecture; and (5) Build a short-pulse test laser delivering 300 mJ at 10 Hz and capable of scaling to 100-Hz repetition rate for testing the MLD gratings. To complete this objective, we commissioned an ultrafast Ti:Sapphire laser system.

Gratings for <150-fs pulse compressors have typically been fabricated with gold-coated photoresist ridges.5 It has been recognized that the plastic photoresist layer may be responsible for reduced performance and lifetime and problematic for high-average-power applications. As a result, gratings have also been fabricated by gold coating ridges etched directly from the substrate. In this project, we have developed a new process for producing high-average-power gold gratings,6 which includes (1) depositing a release layer on the substrate, (2) depositing a dielectric layer to become the grating ridge material, (3) holographic exposure of a photoresist layer deposited onto the dielectric, (4) refractory etching into the dielectric layer to form grating ridges, (5) stripping all remaining photoresist, and (6) gold overcoating. This process produces ridges with an engineered sidewall taper (Figure 1a) that has improved diffraction efficiency when compared to substrate etched gratings.

Finite element analyses using ANSYS Workbench 17.0 were carried out to simulate the thermomechanical evolution of a single petawatt-class diffraction grating of a compressor under use conditions. Further details are described by Alessi et al.7 To remove heat, bars were attached to the top and bottom surfaces of a grating substrate (Corning ULE glass)8 and held at a constant temperature. The simulated steady-state front surface temperature (Figure 2a) and surface height deviation (Figure 2b) are shown for an actively cooled grating for a 40-J laser operating at 10 Hz. The total power absorbed by the grating is 14 W, which corresponds to 3.5% of the laser average power. Under these conditions the temperature varies by 14 °C across the entire grating surface and the surface deviation, from flat, has a 47-nm peak-to -valley across the beam aperture. We examined the limits of this cooling technique by running simulations with different absorbed laser power (Table 1). These limits are determined from Figure 2(c), which shows the surface peak-to-valley versus absorbed power for a single grating with different substrates with and without cooling.

An experiment to measure the surface deformation of a petawatt-size grating irradiated by 600 W of laser average power was carried out in an air environment to demonstrate active cooling and benchmark the simulations. The grating surface's normal reflected wavefront distortion was measured at different times up to 1 h of exposure. The cooling bars were held to a constant temperature throughout the experiment via chilled water circulation. The time-resolved peak deflection of the measured grating surface height is in good agreement with the simulations, as Figure 2(d) shows.

The fabrication of MLD gratings suitable for lasers with <150-fs pulse durations has been challenging.9 No grating simultaneously meets all of the desired design requirements: high efficiency, broad bandwidth, high damage resistance, low dispersion, and no resonance. Simply designing a multilayer stack with the top layer having an optimized groove structure results in the green diffraction efficiency curve in Figure 3(a). Spikes in the efficiency curve are due to narrow bands of light being coupled (and lost) by diffraction into regions of the MLD stack behaving as planar waveguides. This can reduce damage performance as it can increase the electric field within the high-index material in the stack. To understand these resonances, we performed rigorous electromagnetic field modeling within an MLD grating. Using this information, we developed a modified MLD grating design (red curve) with suppressed resonances. Several of these gratings were made up to the 100-mm square apertures. The grating top layer was fabricated in-house while the multilayer coating was fabricated by an offsite vendor. The fabricated efficiency curve is shown in blue, and an efficiency map with a mean of 98.2% and uniformity of 0.1% is shown in Figure 3(b). Laser-induced damage testing of these gratings was performed using the fluence-ramping method with the laser system developed in Objective 5. Initial damage testing for use conditions with 80-fs pulses showed a 50% damage probability of 0.3J/cm2, which was 30% lower than corresponding gold gratings at the same test conditions. For the stretched-pulse duration (440 ps), the 50% damage probability was 5.8J/cm2, which was more than 4 times higher than gold gratings at these conditions. 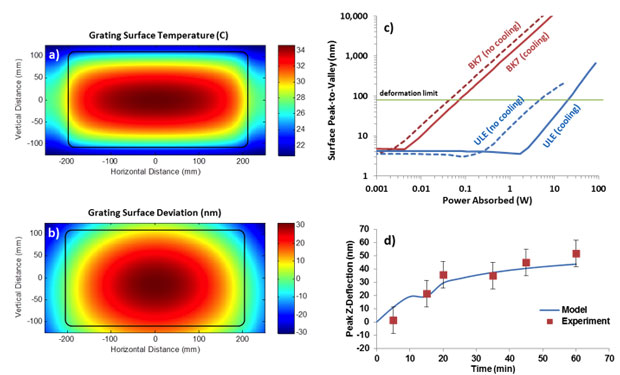 Unlike their gold gratings counterparts, the diffraction efficiency of these MLD gratings has a strong sensitivity to incidence angle, as Figure 4(a) shows, and requires operation at the Littrow angle. To separate the input and output beams in a compressor, we adjusted the input beam to be at Littrow but a few degrees out of plane. To understand the performance of this novel compressor geometry, we first derived an analytical form for the dispersion of a pulse compressor with an arbitrary input beam. We then developed raytrace models in FRED10 (optical engineering software) of out-of-plane compressors to compare with the dispersion from our analytical model and evaluate the spatial–temporal coupling effects. During this process we discovered that a compressor with four separate gratings (Figure 4b) would be required due to the fact that the standard two-grating compressor with a roof mirror had a residual spatial chirp in the out-of-plane configuration. A four-grating compressor operating at Littrow and 4° out-of-plane was built and performance tested with both gold and MLD gratings.11 The total compressor efficiency with the MLD gratings (Figure 4c) was 90% for a laser pulse with 45 nm of bandwidth. This is a 20–50% improvement over the efficiencies of gold grating compressors, which are typically 60–75% efficient. Frequency-resolved optical-grating measurements of pulses from a Ti:sapphire system compressed by this out-of-plane compressor were performed and the resulting group delay is shown in Figure 4(d) in good agreement with the analytical model. The large residual group delay (mostly third-order dispersion) is due to the fact that the laser system is not optimized for this compressor design. These data indicate that 30-fs pulses could be achieved by redesigning the stretcher or using a dispersion corrector in the system. 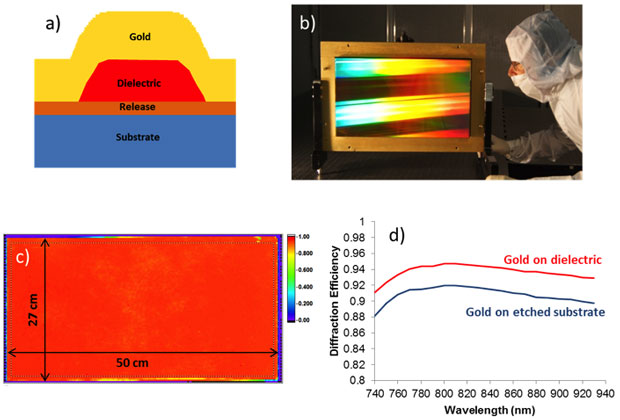 Figure 4. (a) Diffraction efficiency of a multilayer dielectric grating with different angles of incidence. (b) Raytrace model of a four-grating compressor at 4° out of plane. (c) Measured compressor efficiency vs. wavelength. (d) Measured and calculated group delay from a compressed broadband laser pulse.

A Ti:sapphire laser system was commissioned with mostly existing equipment for testing gratings and compressors developed in this project. The system is seeded with a Femtolaser oscillator producing 8-fs pulses at 80-MHz repetition rate and 4 nJ per pulse. The pulses are stretched to 1.5 ns in an Offner-style stretcher. After the stretcher, pulses are sampled to 10 Hz and directed through an acousto-optical programmable dispersion filter. The pulses are amplified to 1 mJ in a multipass amplifier resulting in a Gaussian-shaped spectrum with ~45-nm full-width, half-maximum bandwidth. Pulses are amplified up to 300–500 mJ in an 8-pass power amplifier. Both amplifier stages are pumped by a single 2-J frequency doubled Nd:YAG laser operating at 10 Hz. A traditional in-plane compressor and an out-of-plane compressor, built for Objective 4, are both in air environment and used to compress pulses with reduced energy (<20 mJ). The beam can be sent to a laser-damage test station for measuring laser-induced damage performance of optics developed in this project.

High-average-power, ultrafast lasers are highly relevant to defense, homeland security, fundamental science, biological, and medical applications because of their compactness, high brilliance, and potentially lower cost than conventional sources. Ultrafast laser drivers require a new generation of diffractive optics that can withstand high average power and actively manage residual heat. Our work addresses these challenges and will enable high-average-power, short-pulse laser operations never before achieved, in support of the Laboratory's core competency in lasers and optical science and technology. In addition, this project recruited two new postdocs to the Laboratory who are now permanent members of the scientific staff.

During the course of this project we have: (1) developed a new class of gold gratings, scaled them to petawatt size, and fabricated gratings for outside customers; (2) examined average power limits and developed active cooling to enable high-average-power, high-energy ultrafast laser systems; (3) designed and fabricated broadband, efficient, low-absorption multilayer dielectric gratings; (4) designed a novel out-of-plane compressor that is free of spatial–temporal couplings, having >90% efficiency for 30-fs pulses; and (5) commissioned a joule-class ultrafast laser system which is a unique capability within the laboratory.